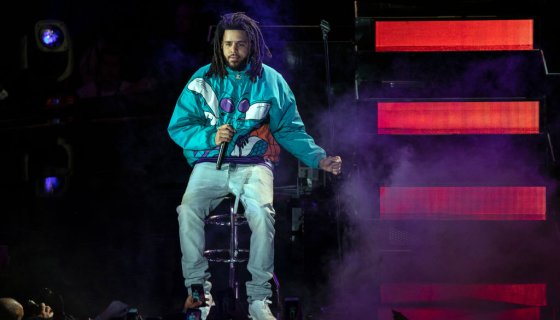 The state of Black America is under grand examination in the wake of the murders of George Floyd, Breonna Taylor, and countless others at the hands of police. Some have questioned the actions of active rappers such as and , with the latter releasing a new song, “Snow On Tha Bluff,” that seemingly addresses his assumed inactions but many on Twitter took the track to be a dig at fellow rapper and budding activist, Noname.

For context, Noname shared in a now-deleted tweet that called out her rapper peers for not using their massive platforms to spread information that could potentially aid the people.

“[P]oor black folks all over the country are putting their bodies on the line in protest for our collective safety and y’all favorite top selling rappers not even willing to put a tweet up. [N]*ggas whole discographies be about black plight and they no where to be found,” Noname wrote.

Most assumed that the Chicago artist was speaking about the aforementioned Lamar and Cole, both of whom have in their respective cities.

With “Snow On Tha Bluff,” Cole immediately launches into a verse that hasn’t been confirmed to be about Noname but the connection could be easily made considering the timing.

From “Snow On Tha Bluff”:

N*ggas be thinkin’ I’m deep, intelligent, fooled by my college degree/My IQ is average, there’s a young lady out there, she way smarter than me/I scrolled through her timeline in these wild times, and I started to read/She mad at these crackers, she mad at these capitalists, mad at these murder police/She mad at my n*ggas, she mad at our ignorance, she wear her heart on her sleeve/She mad at the celebrities, lowkey I be thinkin’ she talkin’ ’bout me/Now I ain’t no dummy to think I’m above criticism/So when I see something that’s valid, I listen/

With the reaction to the song exploding on social media at the moment, Cole made one of his rare Twitter appearances Wednesday morning (June 17) and clarified some of what was addressed in the verse.

“Morning. I stand behind every word of the song that dropped last night,” began Cole’s Twitter thread.

He continued with, “Right or wrong I can’t say, but I can say it was honest. Some assume to know who the song is about. That’s fine with me, it’s not my job to tell anybody what to think or feel about the work. I accept all conversation and criticisms.”

Cole then said, “Follow @noname. I love and honor her as a leader in these times. She has done and is doing the reading and the listening and the learning on the path that she truly believes is the correct one for our people. Meanwhile a n*gga like me just be rapping. I haven’t done a lot of reading and I don’t feel well equipped as a leader in these times. But I do a lot of thinking. And I appreciate her and others like her because they challenge my beliefs and I feel that in these times that’s important.”

Cole’s tweets have seemingly added to a still-growing debate that Black men trying to police the tone of a Black woman is part of the very structure that Noname and others of her ilk are trying to dismantle.

Frankly, the song’s “honesty” claim might be true but perhaps a conversation on the back end with Noname and, a novel thought here, perhaps a collaboration of sorts would probably have served as a better bridge for unity. Instead, the timeline is once again torn apart with little in the way of recourse on the horizon.

We’ve scanned Twitter for some of the reactions to J. Cole’s new song “Snow On Tha Bluff” and Noname being centered on the track. Those reactions can be seen below.

which brings me to this, and yall’s random inability to get what is offensive about the thoughts expressed in j cole’s song that many of you agree with.

if a white person told you your BLM tone was making it hard for them to become an ally we’d laugh.https://t.co/QYEnsuz6pI https://t.co/UkMQzLbK25

I would have been satisfied if J.Cole used this time to tweet about getting justice for Breonna Taylor tbh…..

J.Cole: watch your tone! But teach me!

Black women: No thanks!

Me: right on fucking time! pic.twitter.com/vHhxXDCEuJ

the only artist i listen to more/as much as J. Cole is Mac Miller. who i’ve stated is one of my professional heroes. what you’re NOT gonna do is act like the people validly critiquing his headass behavior are “haters” or tryna cancel him.

i have this niggas vinyls.

Y’all: “You have to possess a certain level of intelligence to listen to J. Cole”.

Jermaine: “Niggas be thinkin' I'm deep, intelligent, fooled by my college degree. My IQ is average, there's a young lady out there, she way smarter than me.”

J. Cole had love & hugs for Kodak & XXXTentacion, two alleged abusers, but has heat for Noname bc she won’t make him comfy w/her tone? The weakest links. 😭 Black women, self-preservation is the only option.

J Cole basically stated that if you’re educated on the matter you should help spread your knowledge and understanding instead of attacking people that lack it and y’all trying to cancel him? Man stfu. pic.twitter.com/81iO61IMsD

J Cole woke up this morning and saw the news that he was ‘cancelled’ and said 😂 pic.twitter.com/6ovPrhMmyb

The whites watching us argue about a J. Cole song & not them being racists: pic.twitter.com/O3MPWW1Yss

So y'all cancelling J Cole and Kendrick Lamar because YOU didn't see them post anything online? Have you check offline? Where things are REALLY HAPPENING? You know they've been in the streets peacefully protesting right? No? Where TF you been this whole time?! Damn Humans. 😑 pic.twitter.com/ZhrPy1cAiF

J. Cole is basically saying that y’all created a narrative about him that he’s not comfortable with bc he doesn’t feel like he’s as woke as y’all claim. And wants people to stop trying to “out woke” each other, but instead, help educate.

The energy towards J. Cole and Kendrick Lamar is grossly misdirected and frankly—a distraction.

This is what happens when your focus turns from “defeating your oppressor” to “which slave isn’t running fast enough.” pic.twitter.com/S9wmssQ4lF

J Cole & Kendrick to noname or anybody who feel some type of way because they didn’t put up a tweet about #BlackLivesMatter knowing these two dudes out protesting on the streets 🤦🏾‍♂️😂 pic.twitter.com/X3bbLuv00y

My mentions are filled with ppl arguing what J Cole meant and disregarding what he is actually saying at the same time. This is exhausting, can only imagine that this is a small dose of what black women experience every day. We gotta wake up man.

It’s so many layers of non comprehension mfs got with this j Cole song, I’m taking notes on the slow mfs amongst my timeline

Am I missing something about this Cole song? J Cole needs to be canceled because of what now? Or is this just another case of people who never do anything for the community being angry at those who do everything they can for the community?

Noname: Rappers ain't shit. Do better y'all. Use your platform.

J. Cole: Damn sis I've been doing a lot but I could definitely do more. Maybe show me what I'm missing, without insulting me.

J cole ain’t disrespect that girl not one time and y’all got on here acting like he called her all types of bitches. He called her Ass a queen and said her message could have been better/different. Y’all get on my fucking nerves

Nighas quick to cancel everybody but themselves . Also , the main folks canceling are the people who just woke up during the pandemic , and was sleep for the last 10 yrs while artists like J. Cole and Kendrick were constantly talking about oppression and systemic racism lol

J.Cole has had work for Obama, Kanye, Wale and now No Name…

People gone have work for him and so it should be..

So Angela Davis can say it, but J. Cole can’t? FOH pic.twitter.com/JAROFq3F2v