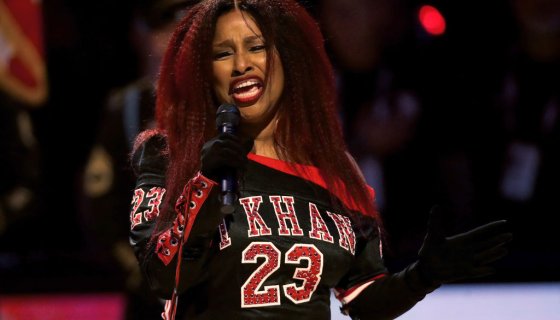 is one of the most respected vocalists and songwriters of her era and she deserves every accolade that comes her way. However, fans on Twitter have some strong thoughts about the Khan’s performance of the National Anthem at this year’s .

Khan, 66, launched into the National Anthem with a rendition that didn’t go over well with many on the social media network. Almost immediately, the slander rained down from on high and didn’t let up. Camera shots of the players waiting to start the game also had folks on Twitter remarking on their resolve not to crack after what they heard.

Without a doubt, Khan is a legend and even superstars have bad nights, so we’re treading carefully here in how we approach this topic. Still, some are saying that Khan’s showing in Chicago Sunday night (Feb. 16) was up there with Fergie’s struggle National Anthem performance from the 2018 game.

As it stands, Twitter has been relentlessly slandering the great Chaka Khan’s National Anthem performance and we’ve got the reactions listed out below. To hear the actual anthem, look directly below.

We’ve had some bizarre takes on anthems at All-Star games recently, Fergie being one.
But this might top the lot. #NBAAllStar #ChakaKhan pic.twitter.com/NktPlo3xCK

Chaka Khan a legend and all but…. that rendition of the anthem was something #NBAAllStar2020 pic.twitter.com/zMIZYmPeQt

I adore Chaka Khan. She is a living legend, but I DID NOT like that rendition of the Star Spangled Banner AT ALL. Lord help her. #NBAAllStar pic.twitter.com/UVwfMDA1d7

I ain’t gon say nah bad word about Chaka Khan, but they definitely in the control room like, “who’s idea was this..” #NBAAllStarGame pic.twitter.com/zDXdIMEee3

Chaka Khan is an icon. No slander will be tolerated. Not this Black History Month 😂

NBA: What key are you going to sing The Star-Spangled Banner in?

Chaka Khan: ALL OF THEM

Me listening to Chaka Khan sing that anthem 😭#NBAAllStar2020 pic.twitter.com/T6of41iPTj

*whispers* I didn’t have an issue with #ChakaKhan’s national anthem.

this is what chaka khan sounded like performing the national anthem at the all stars game pic.twitter.com/mEeXXIWrjw

Chaka Khan said the land of the pic.twitter.com/rkOFhLKATL