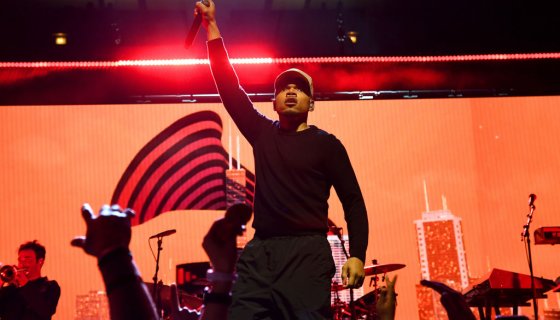 For the most part, the NBA’s return to Chicago for the 69th All-Star game was a success, but there were a few hiccups that had some viewers scratching their heads on Twitter.

Outside of of the National Anthem, …AGAIN, #NBATwitter enjoyed All-Star weekend and even loved the big game. BUT there was one thing that had viewers perplexed and scratching their heads.

Chance the Rapper was given the honor to rock the hometown crowd during the halftime show. He performed a medley of hits that included “No Problem,” which led to Lil Wayne popping out on stage, followed by Quavo and DJ Khaled (unfortunately) to perform “I’m the One.” BUT when Chance went into “Ultralight Beam” fans were expecting Kanye West — who was in the building — to appear, he was a big no show. He closed his performance out with a touching .

It was a very confusing moment, mainly because rumors hinted at the West making an appearance that would have made all the sense in the world because the All-Star game was in his hometown. Plus, there was a photo circulating on Twitter showing microphones with both Kanye West and Justin Bieber’s (who was also absent) names under them.

While some could care less (such as myself) could have cared less about West not touching the stage, many were disappointed Yeezy didn’t get a chance (no pun intended) to perform in his hometown.

Hey, maybe he decided that setting wasn’t gospel enough for him, he did claim he wasn’t performing “secular music” anymore. You can peep the full performance plus the reactions to not hitting the NBA All-Star Game halftime show stage plus Chance’s performance below.

Chance performed Ultralight Beam without Kanye while Kanye was sitting 10 feet from him. pic.twitter.com/LKpav5rLY0

They really performed Ultralightbeam at the all-star game without Kanye West. I am disgusted pic.twitter.com/IwNGIrSbLL

Chance the rapper started singing ultralight beam and didn’t bring out Kanye even tho he’s there pic.twitter.com/pLuZUWgEls

They chose Chance the Rapper even tho Kanye is standing right there #AllStarGame pic.twitter.com/8op7trJgbk

Kanye being at the All-Star game but not performing his verse with Chance the Rapper#NBAAllStar pic.twitter.com/zXvcRQYz4U

Me after listening to 20 minutes of chance the rapper pic.twitter.com/yPVoaRl0ZX

Chance the Rapper is really performing Hot Shower at the ASG pic.twitter.com/f0OBaEvEQ3

Chance the Rapper is the halftime performer… pic.twitter.com/eHwhaW0tut