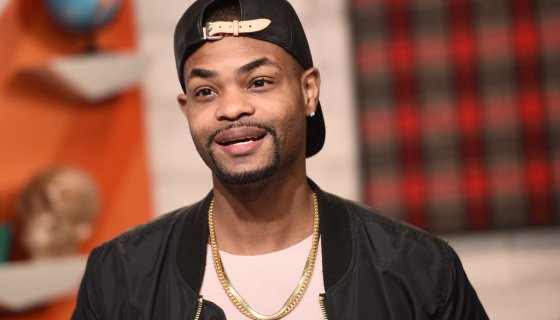 is best known for his Vine comedy videos ahead of transitioning to movie and television roles, but he hasn’t used his platform much for activism. That changed this week after the comedic actor took to social media and shared a video that spoke to the concerns of the Black Lives Matter movement in the wake of the deaths of , and others.

In the video, Bach, 31, is seen covered in tattoos bearing the names of Trayvon Martin, the aforementioned Floyd, Taylor, and Arbery, along with a host of other names of Black people who have lost their lives to the police or other unjust means.

The well-meaning message was picked apart immediately by Twitter observers who noted that some of the names written on Bach’s bare torso were misspelled although some stood with him for at least attempting. Because of whatever bone Twitter has to pick with the homie, he’s been getting ripped apart for his impassioned plea and message to the point that some have been referring to him as “Martin Luther” King Bach.

Because Twitter is often devoid of anything resembling chill, many on the social media platform have been roasting King Bach and his message down to the misspelled names, the tone of his voice as he makes his statement, and the fact that he’s never done anything like this before. One observer noted that this action won’t be a risk to his brand or deals as it’s somewhat fashionable and well-timed to speak up for Black lives at the moment.

We’ve got all the reactions to King Bach’s Black Lives Matter message below.

I CAN'TTT GET PAST THE BLATANT MISSPELLING OF THE VICTIMS NAMES AND THEN THIS DRAMATIC MONOLOGUE LIKE HE'S IN A BHM TALENT SHOW DOWN AT ANDELL'S.. keep this in the drafts sir.

You're an actor. You've never cared.

You care about your brand deals and this is good for you now. There's no risk here.

I wish you cared about Black lives when it was unpopular. This is just acting for deals and retweets.

Being Jamaican and Canadian ain't African-American.

This is very serious but Twitter doesn’t take shit serious

1. Someone called him Martin Luther King Bach
2. Someone said he looked like a Chipotle bag https://t.co/bBvaG04szW

King Bach tryna sound like the black Gabbie Hanna like he wasn't making stereotypes about black people back in the vine days
He do be bringin strong point to da table but…you could not PAY ME to sit thru that awkward ass long paused video. pic.twitter.com/9nIFQipU5B

twitter thinks that King Bach is Johann Sebastian Bach and i just need everyone to know that. pic.twitter.com/1YVpmNHavZ

someone said king bach looks like a chipotle bag and eye- 😭 pic.twitter.com/TUPvERiRf1

The nigga recording king bach trying not to laugh 😭 pic.twitter.com/9ybPdH1mjY