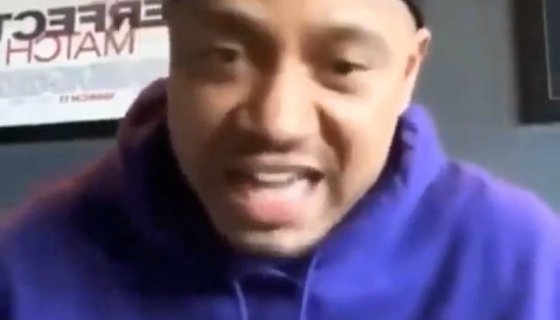 is still under hood investigation for his 2018 hit and run accident that wrecked his whip with many still wondering who the mystery woman was in the vehicle. In an Instagram Live conversation with , the former BET host donned the cloth of hate and began unloading on the Wayans family’s legacy then took it left by letting off random Que Dog barks for no apparent reason.

The bizarre display of total corniness took place in the IG Live call that went wrong the moment Terrence J said he was going to school Wayans, who is eight years his senior, on how success works. According to TJ, Wayans only got on because of his big brother Keenan Ivory Wayans and not due to any of his own creative gifts.

Gracefully, Wayans tried to get Terrence J to understand that the only reason he was able to become successful was due to his family upbringing. TJ felt some kind of way about Wayans’ come up, seemingly saying it was a hidden advantage over others in the same lane.

Out of nowhere, Terrence J, apparently a member of the Omega Psi Phi Fraternity, Inc., began throwing up hooks and barking, stating to Wayans that he came up the hard way the mean academic streets of North Carolina A&T, again hammering home that he had to get it out the mud, unlike his more successful adversary.

As a result of the video going viral, people are questioning how a conversation between two men who have obtained measurable success in their lanes could go haywire as it did. A wrinkle that has been added to all of this is the moment was allegedly planned with Terrence J saying Wayans was in on the nonexistent joke.

Twitter is having a blast clowning Terrence J’s hate masked as love and we’ve got the best reactions below.

Terrence J sound stupid and like a hater . A solid family BUILDS TOGETHER Keenen Wayans did exactly he was pose to do for the culture and his family and his family STOOD ON THEIR OWN TALENT period. Shit wasnt handed to any of them they put in work ! Terrence and his barking wack pic.twitter.com/1ldNmdr4bL

terrence j isn’t the only black person that feels like that either. mfs be brainwashed and feel like you HAVE to “struggle” to make it. struggle olympics. weird as fuck. white people get help generation after generation. keenan ivory gave them an inch and the fam EXECUTED.

Nobody Black was doing what Keenan Wayans was doing back then. What is Terrence J talking about

Terrence J is a fucking clown, and I don’t understand that envy behind the Wayans success at all. Literally no other race gets shitted on for nepotism at any level. Why wouldn’t your family help you if they could?

Terrence J wack as hell for this. Man tryna talk down on one of the most successful black families in Hollywood. Couldn’t even allow Marlon to speak or get a point across cause he too worried about barking & yelling bout the frat instead of listening https://t.co/F2OlfBqFE6

TJ got some low self esteem. Had to run to his frat in an attempt to build some type of response. Smh. Marlon is talking family commitment and unity and hustle and TJ talking about a group he paid to join to act as family. Real family vs Bought friends

terrence j doing all that country ass barking while marlon trying to make a point, smh. he's a fuckin clown. you went to college, AND? keenen put his WHOLE FAMILY ON & they took the baton & RAN WITH IT, as they should have. terrence j disrespectful AF. smfh.

Me after waiting 10 years to slander Terrence J for ruining 106 & Park pic.twitter.com/E3dPLTyiAG

Terrence J really felt the need to mention he’s in a frat because he thought it would help him make sense. He’s 38.

The jokes write themselves!

What the Wayans family has done for comedy, culture, and black people is something we’ll probably never see again.

Terrence J a lame ass for trying to step on that https://t.co/FivFjVoES5

Marlon Wayans didn’t give us all these treasures to be disrespected by a subpar tv host like Terrence J pic.twitter.com/zD5blwpQEr

The Keenen Ivory Wayans that gave us the greatness of In Living Color?

The greatness that gave us the greatness of his siblings, Jamie Foxx, Tommy Davidson, David Alan Grier, Kim Coles, and many more.

Rocsi in the comments even she know her former cohost is a lame. There’s a seat with your name on it, Terrence J. pic.twitter.com/ra74ubPV7K

We always talk about (whites, Asians, etc) putting their families on when they get on and Keenan Ivory Wayans did precisely that through his shows, movies and production company. And Terrence J told Marlon to “get off Keenan’s lap” on IG live. I hope Marlon blocked him.

Since Terrence J has so much to say who was the woman in the car crash with him while his gf Jasmine was at home? 🤨 https://t.co/zZci9D8ji1

Y’all ripping Terrence J to shreds when in all actuality he and Marlon Waynes were playing around & doing comedy.

Not a single soul:

Y’all ripping Terrence J to shreds when in all actuality he and Marlon Waynes were playing around & doing comedy.