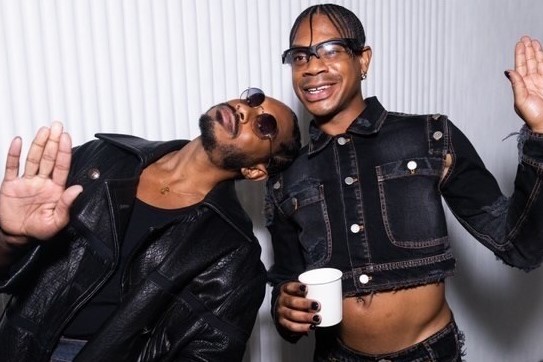 In case you missed the waves of disappointed memes, Telfar tote bags are still selling out in seconds, regardless of the impossible riddles you now have to answer to get your hands on them. However, it seems the label’s signature item will soon have some competition. Introducing: the Telfar duffle bag, a new, cylindrical style announced during an off-schedule panel at New York Fashion Week.

Available in black, as far as we know, the duffle bag lifts the iconic logo off last decade’s definitive it bag, and slaps it onto something more suitable for carrying to the gym (can’t relate, but the Liberian Olympic team are probably buzzing), or for staging a particularly stylish bank robbery.

The announcement of a new bag isn’t all that Telfar Clemens had in store at the mock press conference, either. The designer also officially announced Telfar TV, an upcoming television channel that will be downloadable via Roku and Apple TV.

Apparently, Telfar TV is set to feature a range of programming, from QVC-style content (see: the shopping channel previously featured in Telfar’s teaser for its UGG collab) to music videos and, as hinted by the channel’s dedicated website, videos sent in by fans.

Of course, you can also expect a cast of famous faces from Telfar’s orbit to make an appearance. The NYFW panel alone included A$AP Ferg, Leila Weinraub, Jorge Gitoo Wright, Ian Isiah, and Dazed 100ers Kandis Williams and Teezo Touchdown, while questions flew in from the likes of Oyinda, Moses Sumney, Bretman Rock, and Selah Marley.

Telfar TV is also set to come with even more convoluted ways to literally secure the bag, and ward off bag-buying bots. Fans of the brand that happen to be watching at the right time will be treated to a QR code that pops up on their screen, which they will be able to scan in order to access exclusive products.

Are you sitting comfortably? Then Telfar will begin.