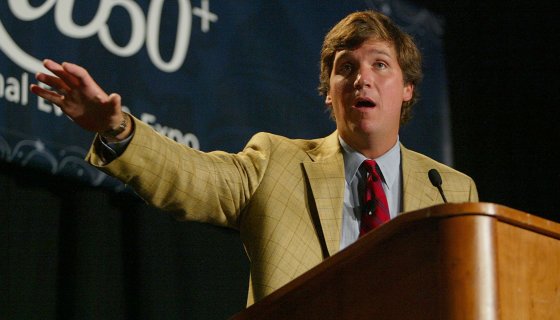 has been the host of his nightly talk show since 2016, helping to somewhat usher in the Trump Era by way of his conservative views and talking points. In another one of his bombastic claims, the Fox News host declared that the national and global unrest sparked by the death of George Floyd and countless others is, in Carlson’s words, “definitely not about Black lives.”

Carlson, the stepson of the heiress to the Swanson Foods company, has aimed some explosively bad takes in the direction of Black people before but this latest move is one of the worst. With much of the world united in shouting down racism, police brutality, and state-mandated violence against Black lives, Carlson’s stances stand in contract with the all-American values he claims to trumpet.

The statement was made during a Monday night (June 8) broadcast of Tucker Carlson Tonight when the 51-year-old host opened his show with pointed barbs in the direction of Black Lives Matter and even seemed to suggest Black people will start attacking those who oppose the movement’s views.

“This may be a lot of things, this moment we’re living through, but it is definitely not about black lives,” Carlson said. “Remember that when they come for you, and at this rate, they will.”

Amazingly, Carlson essentially tells his viewers to not exhibit “weakness” and to stand firm in their stances in opposition. This rhetoric has been the fuel of the Alt-Right and other right-wing extremist groups who have demonstrated in a similar fashion as the current protesters have but with far less scolding from conservative talking heads.

The trending topic #TuckerCarlsonIsARacist has kicked off on Twitter in response to his rambling monologue shouting down Black people and their right to protest. This comes in the wake of another trending topic connected to Carlson where users referred to him as “Cucker Tarlson.”

Check out the reaction from Twitter To Tucker Carlson’s statement on Black lives below.

So @TuckerCarlson just told his huge prime time audience that "black people are coming to get you, white people." If you recall, this is the same guy who last year said that white South African farmers were under threat from black South Africans and Trump ran with it.

Tucker Carlson is the reason you have guys like this screaming “All Lives Matter” while trying to shoot peaceful protestors #TuckerCarlsonIsARacist pic.twitter.com/tRXC301ja0

Your occasional reminder that Fox News is not a feature of the natural universe, uncontrollable by man. It's a human construct in our capitalist system. it has directors and executives responsible for it, and advertisers and cable systems who support it.https://t.co/2N0pcdzLeA

All this talk about how #TuckerCarlsonIsARacist reminds me of that time #JonStewart called @TuckerCarlson a DICK on national TV. 😁😅😂 pic.twitter.com/PYUzIGfRvA

Tucker Carlson is 30% confederate monument, 30% incel, 10% mayonnaise, and 30% “why is there no white history month?” according to Klancestry dot com.

Has anyone done an analysis of whether the advertisers of Tucker Carlson's show also posted statements of support for racial justice or supporting the black community within the last week?

If so, now would be a good time to expose those brands. https://t.co/INqf3iHm54

I woke up today…

Some things will never change.

Oh but this heavily armed mob is perfectly fine with Tucker? #TuckerCarlsonIsARacist pic.twitter.com/u6lX5l7MQU

Fox News is a danger to the USA.#TuckerCarlsonIsARacist

Did anyone need a #TuckerCarlsonIsARacist hashtag to figure out he's racist? He just compared black people to hornets and called them "the worst people who hate you." I'm surprised he doesn't wear his KKK hood on air.

#TuckerCarlsonIsARacist and an immature, entitled bigot in every sense of the word. It's amazing that he's thought of as "the smart one" on Fox News. pic.twitter.com/15CYkYAnJ4