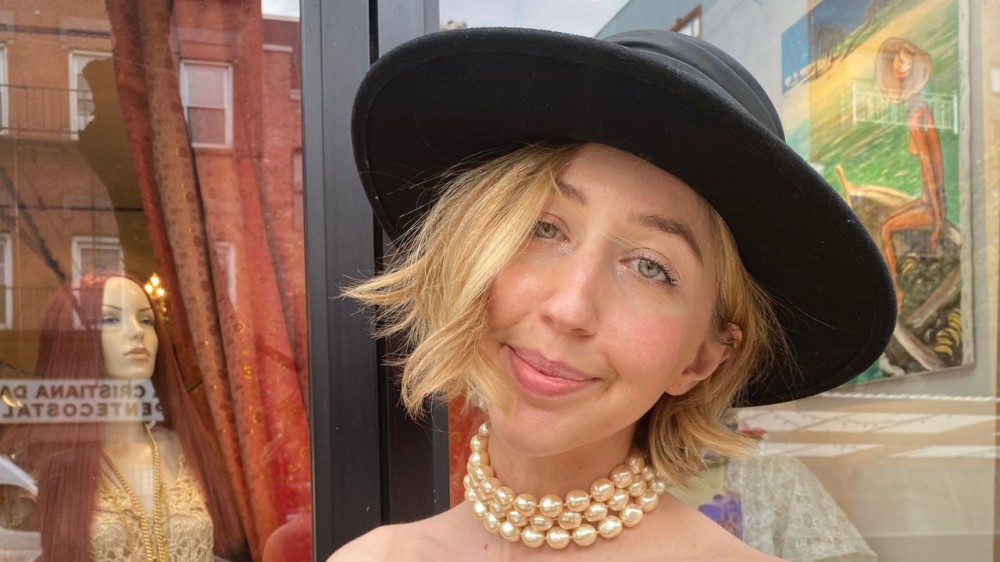 Welcome to Shopping with Friends: a new Vogue series in which we sift through the racks of a fashion lover’s favorite store.

Saturday Night Live’s Heidi Gardner is a vintage head. The fashion-forward actor and comedian always infuses something old into her quirky outfits, which are typically marked by animal prints, peppy shoes, and kicky pants. In early March, she left a taping of The Drew Barrymore Show while wearing a head-turning leopard print jacket from Le Grand Strip, a vintage shop on Grand Street in Brooklyn’s Williamsburg. Three weeks ago, Gardner took me along to see the store in person.

Gardner arrived in a pair of Fila platforms with a troll head locked into the laces, a freaky bauble she picked up in the East Village. “When I went back home my grandma always had foot problems and when she had foot surgery, she was like, ‘These have so much support,’” Gardner said. “So then I ordered them.” Once inside, she was on the prowl for something. Though she didn’t have something specific in mind, she had two shoots coming up and needed an outfit.

Gardner found out about Le Grand Strip from her hairstylist back in February of 2020. “When I first came in here, it reminded me of what the top of my mom’s dresser looked like,” she said. “I remember there was this little tray over here that had a bar set from a former Bond girl who had just passed away.” The store is filled with glitzy oddities and fantastically chic vintage items. Trays of fat costume jewelry. A bubblegum pink Versace hat. Rows of tulle dresses from the ’80s. Bags galore with lucite handles. All items, coincidentally, you could see Gardner wearing. While it’s my first time coming here, the staff embraces me like we’re characters on Cheers.

That magical, very New York feeling is thanks to the owner, a flamboyant and blunt French woman with amazing cheekbones named CC McGurr, and the shop manager Alexandra Blair, a beautiful part-time musician and a walking encyclopedia of vintage history. High-energy and passionate, they complement each other well. Both adore Gardner. “I love her style the most because it’s unpredictable. At one moment she’ll do a full green gown from the ’70s and then the next, it’s ’80s with big shoulders,” says Blair.

As we shop, Gardner goes the more standout route and has picked out a pair of flared checked pink pants. She’s always been into fashion, in large part because of her mother’s ’80s and ’90s style. “Instead of Tupperware parties, my mom and her friends would do lingerie parties,” she says. Gardner’s love for clothes trickled into her work. When she dropped out of college to come to Los Angeles to be a hairstylist, she also did sketch comedy at The Groundlings Theater. “You’re not making any money. You’re buying all your costumes and all your wigs. That felt like such a fun, supplementary part of performing,” she says. “I remember taking two wigs to New York with me when I knew I got the [SNL] job as just in case they don’t have good ones.” (They did.)

Even at SNL, a much bigger production, Gardner still is able to apply her love for clothes into her characters. Cast members can work on the looks for a sketch if they create the script. That was the case when she and Harry Styles acted as a freakishly beautiful Nordic couple as a birthing class. “They’re based on a couple that I saw getting some matcha who were obviously tourists and they were all in white. They looked incredible,” she says. “[For the script], I wanted them even more high fashion versions of that.” The result? Gardner and Styles looked like incredibly chic sister wives of '60s cult leader Father Yod.

As Gardner gets into the dressing room, Blair and McGurr bring her a vintage Balmain suit, a halter fuchsia dress that cinches Gardner’s waist, while the actress picks out a print shift dress and a shoulderless black dress. (For myself, I’d chosen a gold chain belt, trying to evoke Jennifer Lopez’s sassy look from “Love Don’t Cost a Thing.”) Gardner is unsure about her options and asks us all for our opinions. McGurr is the first and last to speak. After all, she’s the sage of the group. “I think the black [Balmain suit] you look fantastic, absolutely amazing. But it’s also too easy,” says McGurr. “I think that the winner is the pink dress. You’re a fun girl! That’s your personality!” That she is.