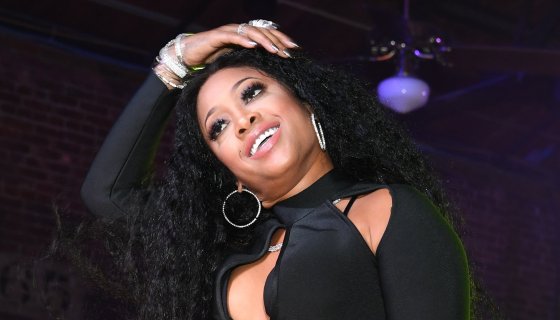 doesn’t play when it comes to her career and after suggested that the two should go head to head in a #Verzuz Battle, Trina took time to show the “My Neck, My Back” rapper who the baddest b*tch is.

On Wednesday (May 6) revealed that she has no interest in battling Khia on the Trick & Trina Morning Show on 99 Jamz, dismissing Khia as not in her league after Khia said she would dominate the 14-time gold-selling rapper in an Instagram Live battle.

“I’m a queen; this is called royalty over here,” she stated. “I’m not stepping off my throne to address no bum, no chicks that are beneath me, and nobody that hasn’t worked as hard as I worked for anything.”

Ensuring that got the message, Trina expounded further on her point, sending proverbial jabs about how many hits that Khia truly has.

Although Trina went in, her gloves off rant was in clear contrast to Khia’s request, which saw her laughing about the face-off before adding that she had well over 280 hits to battle with.

Khia wants to have a HIT battle with Trina on #VERZUZ 💀 pic.twitter.com/LuA9EgnycM

The spawns over two decades after Khia claimed she wrote Trina’s 2000 hit “Baddest B*tch” without receiving the proper credit. Since then the two have publicly traded insults both on record and online. The most recent being in 2017 when the two went back and forth on an Instagram post for The Shaderoom.

Although Khia sparked off the most recent conversation, since Trina’s rant she has yet to respond.