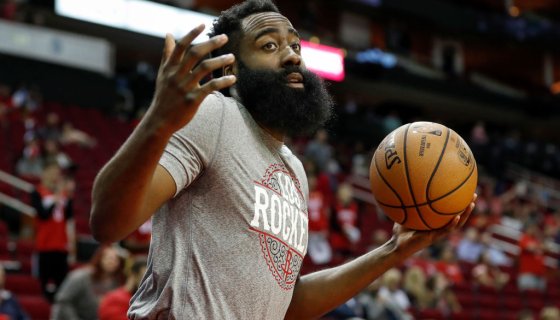 FINALLY joined the Houston Rockets in Orlando at the NBA bubble. His arrival is being hit with criticism thanks to a mask he decided to wear.

Fans were wondering when Harden was going to show up the bubble, with many speculating that Harden caught rona like his running mate Russell Westbrook. His arrival shut that rumor down with the team, and Harden claiming his trip to Orlando was delayed due to “some family issues” ESPN reports.

While it is a welcomed sight to see The Beard back on the court, Harden is catching some serious flack from fans after the Rockets shared a photo of the electric scorer rocking a “Thin Blue Line” mask with the caption “Mask Up.”

Once the photo supplied by the league hit timelines, the fallout was swift. R&B singer didn’t mince words commenting on it and in a retweet of the post said:

“This certified clown shit. I’ll say it for everybody who scared to. FOH”

This certified clown shit. I’ll say it for everybody who scared to. FOH https://t.co/pVRMaL9dPG

While some might see it as much ado about nothing, the “Thin Blue Line” is described as a white supremacy symbolism disguised as a “pro-cop” stance and was started in response to “Black Lives Matter.”

So it’s quite understandable why many fans, specifically Black folks, are not feeling Harden’s choice in a mask. But someone is willing to cape for the NBA all-star. Atlanta rapper, stuck up for his ‘brada” basically claiming that his boy was ignorant, and he has no idea what “Thin Blue Line” is because he “has no internet.”

“Just so u know James harden is my brada… btw he don’t have internet so he obviously don’t know what’s right or wrong if he posted something that’s against US…but I hate when rappers get in niggas biz like it’s can’t happen to em. Buster let niggas clear they shit up activist.”

Well, Harden made it very clear he is well aware of what is going on in his city of Houston when he spoke on the protests that took place there.

“The way the city just like rallied, it was amazing. I think the world saw it. The march and everything we’re standing for is very powerful.”

James Harden on how Houston handled the protests for the late George Floyd:”The way the city rallied,it was amazing.I think the world saw it. How so many people could come together..Obviously it was for a tragic reason.The marching&everything we’re standing for is very powerful” pic.twitter.com/7NTkL90l2D

Anyway, whether he knew about it or not, it wasn’t a good look for James. Twitter was on his ass and called him out. You can peep the reactions below.

This nigga fw the police 🤨🤨🤨 pic.twitter.com/vR3tCenydG

4. Hmmmm this is a possiblity

James Harden is prolly the least political star in the NBA. Im 99% sure he saw the mask and bought it cuz he thought it looked cool

James Harden born and raised in Compton. If you think he copped the mask in support of “Blue Lives Matter” you’re delusional

7. There is a Dr. Umar video for every situation.

Idk who set James Harden up with that mask/bandana but

For the love of GOD tell me James Harden isn’t wearing a mask called “the blue patriot” pic.twitter.com/nSf1Vu4ig9

James Harden probably got the mask because he thought it was cool and didn’t know what it meant. James Harden is one of the least political people in the NBA lol ya definitely reaching.