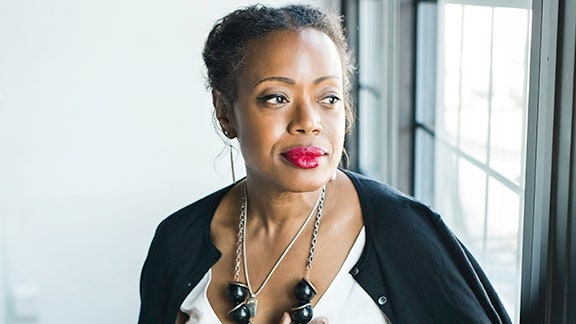 Over two decades, Tracy Reese’s namesake label moved from strength to strength with its playful marriage of bold colors and eye-catching prints with smart, meticulously-cut silhouettes, finding fans in everyone from Michelle Obama to Meghan Markle to Taylor Swift. But after disappearing from the New York Fashion Week schedule for a season, Reese reemerged last summer with a very different proposition. Her new brand, Hope for Flowers, marked a conscious attempt on Reese’s part to press reset on the overproduction and relentless pace of running a brand today, with an emphasis on sustainable textiles, ethical production, and a firm commitment that it would start small and remain small.

All of which—even if she could never have predicted it—left her in stronger stead than most to navigate the challenges imposed by the pandemic. Still, it speaks to her finely-tuned instincts as both a designer and businessperson that she keenly felt an urgent change was needed. “I am hoping that the pandemic has given everyone pause to kind of reexamine why we're in this industry, and to get back to the parts of it that we love, because I think it's easy to get taken up with the routine of it and the demands for more and more product, and pretty soon it's more of a business than a creative enterprise,” says Reese from her studio. “It’s been challenging, but I think ultimately that’s a good thing.”

One of the most notable ways in which Reese aimed to break away from the conventional model for launching a fashion brand was by establishing Hope for Flowers in her hometown of Detroit, as opposed to the city she had spent the entirety of her career up to then, New York. Again, the pandemic made clear that the future of fashion lies in broadening its lens to cities outside of the four major industry capitals. But so too has the experience of working under lockdown affirmed Reese’s gut feeling that building a brand in a city like Detroit is not just a genuinely viable possibility, but an advantage—in large part thanks to the city’s rich and often overlooked design community. “I'm not giving up on New York, I still have my apartment there, and my friends are there, and I still need New York to facilitate parts of my business,” Reese adds. “But I've learned that I can do pretty much everything from here, and that's been a really positive experience.”

Given the brand only celebrated its first birthday in June, some of the ways in which Reese hoped to put down more significant roots in Detroit have had to be put on hold for now, but the intent still remains. “The long term plan, which I'm starting to unfurl, is to work with local artisans here in Detroit, and to make one-of-a-kind upcycled pieces too,” Reese explains. “It’s been good to push myself to integrate into the community here, and discover more creative people here to collaborate with, and just really delve more into the town and become a part of its workings.” While it may have delayed some of the aspects of the brand closest to Reese’s heart, it’s also allowed her the time to figure how to realize them to their fullest effect. “I’ve been contemplating my business structure, and planning and focusing on what I want the next five or ten years to look like, and I might not have been able to take the time out to do that otherwise,” she adds. “I’ve picked up some skills that I was reluctant to pick up, and that can only be a good thing.”

Of course, outside of the innovative approach to brand-building Reese has taken with Hope for Flowers, she’s never forgotten the most important part: the clothes. With its looser, more relaxed take on the exuberant, kaleidoscopic design signatures that have lent Reese’s designs their enduring appeal, it perfectly captures what her customers—with whom she now has a closer dialogue than ever—are looking to wear during lockdown, and beyond. “I thought that I would need to play it a bit more safe this year, but I think the customer really wants something to dream for,” says Reese. “I don't think she’s really saying, ‘Oh, I’m just going to look for something that's very casual and comfortable.’ I think she wants to be uplifted, she wants to enjoy fashion and to have fun. I think we all want to be able to express ourselves again.”

To express ourselves, yes, but not to lose sight of the core message behind Hope for Flowers either. “I mean, we're drowning in merchandise, and not just fashion—even just as consumers generally we're spoilt for choice,” Reese notes. “We don't value our purchases as much as we did even just ten years ago. And I think that that's kind of sad because as a creative and as a designer, we put a lot of our heart and soul into our work. To see it quickly dismissed because the next thing is coming down the pipe should not be the point of the exercise.” If there’s anything that defines Hope for Flowers, after all, it’s the palpable passion Reese feels for the project and its message—or, as she puts it best, its heart and soul.