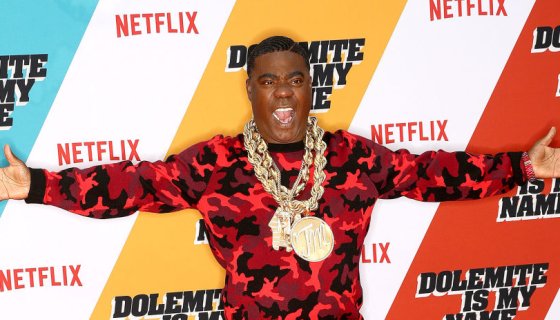 Well, this isn’t the kind of promotion TBS was looking for its original comedy series, The Last OG starring . Following a bizarre Today Show interview, Twitter is now debating if he is even funny at all.

Tracy Morgan is well known for his unusual style of comedy that can sometimes push the limits but not doesn’t step over the line. Tuesday (Apr.7) morning, Morgan spoke with The Today Show’s Hoda Kotb, and things got very awkward. Kotb asked the actor how he and his family are dealing with the coronavirus shutdown measures, and the comedian/actor tried to be funny but took things a bit too damn far.

“Me and my wife been quarantining it for like 3 weeks now, so she’s pregnant 3 times. Every week she got pregnant,” Morgan claimed while Kotb uncomfortably laughed and said okay. Oh, and he wasn’t finished either, he further added:

“We roleplay a lot now, she’s playing a young maiden whose grandfather was infected with coronavirus, and I’m the scientist who discovered the cure, and she’ll do anything to save her grandfather’s life, ANYTHING.”

Hoda quickly changed the subject to Morgan’s house to get out of that uncomfortable situation.

Morgan also wildly claimed he wanted to get his gorilla tested for the virus, has an N95 mask, and said we shouldn’t place blame on for his inadequate response to the coronavirus epidemic sweeping the nation.

The interview has now sparked a moment where Twitter users are now claiming Morgan wasn’t even funny, which is highly debatable, and, of course, he is catching heat for cutting Trump slack for how he is handling the coronavirus. You can peep the reactions to Morgan and his wild jokes in the gallery below.

Tracy Morgan said he impregnated his wife 3 times in 3 weeks, wants to get his gorilla tested for ‘rona, has a N95 mask, and said we shouldn’t place blame on Trump for how he’s handled the pandemic. Hoda gracefully got through that interview, but I know she was like… pic.twitter.com/Bcrvrj6WTM

Tracy Morgan should social distance himself from jokes.

*Looks to see why Tracy Morgan is trending* pic.twitter.com/BO0kPs7QBd

Tracy Morgan was never funny. I don't know why it took an interview on the Today Show for people to realize that.

you can hate what Tracy Morgan said, but stop these lies about him never being funny pic.twitter.com/CoSp6P6EAj

I slightly regret looking into why Tracy Morgan was trending. pic.twitter.com/1Jz3iEgcg8

Anyone walking in on Tracy Morgan interview pic.twitter.com/9OhglcBQij

you have to wonder what the thought process was behind putting a quarantined Tracy Morgan on live TV but I’m sure glad they did pic.twitter.com/OqFaN9O0my

He wants to have a word with you pic.twitter.com/fCgJx4ExHT