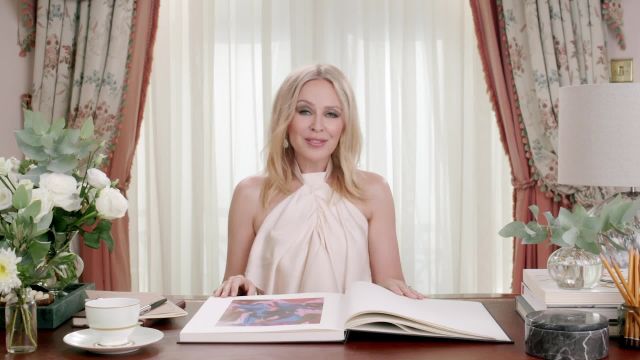 Kylie Minogue is synonymous with upbeat music, glamour, and dancing. Listening to the pop icon’s records just begs for a good time. On the style front, the Australian singer, who released her new album, Disco, this month, has pulled out a number of fashion moments over the years that have cemented her status as a legend. Taking into account her dazzling performance looks and memorable music video fits, there’s rarely a Kylie moment that isn’t complete with custom designer clothes—and she’s exploring some of her best moments in a brand-new Vogue video.

Minogue’s trip down fashion memory lane began at the start of her career, back in the late ’80s. She recalls the promo shoot she did for her breakout single “The Loco-Motion,” in which she wears a simple white shirt and jeans (a far cry from the sizzling dresses she wears today). “I probably still couldn’t believe that I made a record,” she says of the moment. “I never would have dreamt that all these years later, I would still be in the same business.” A few years later, in 1991, Minogue really began to develop her own taste and personality. In her “Shocked” music video, for instance, she wears a look from Azzedine Alaïa, marking one of her first moments veering into high-fashion territory. “For this video, I was really inspired by Italian, Hollywood glamour,” she says. “And, of course, Barbarella.”

In the early aughts, when Minogue was a well-established global pop star, one of her most iconic looks was for the music video for 2001’s smash hit “Can’t Get You Out of My Head,” in which she wears that iconic white hooded catsuit designed by Mrs Jones. “It didn’t look like much on the hanger,” Minogue recalls. “It took some ingenuity to make it hang like that on me, but it more than did its job. It became iconic. The video is quite futuristic and we were inspired by Grace Jones.” Another favorite moment from the early 2000s? The spring 2003 Balenciaga dress she wore in her “Slow” music video, designed by Nicolas Ghesquière. “We filmed this in Barcelona at the Olympic swimming pool,” she says. “I was trying to make things not too hot, and it ended up being a hot video—all these gorgeous people in their bikinis and swimming trunks on their towels!”

As for some of her more recent fashion moments, Minogue recalls her Glastonbury Festival performance just last year, when she performed in the “Legends” time slot, wearing a glistening crystal dress. “When this dress is under light, it just shimmers,” she says. “Every crystal is put on by hand.” Her glamorous ensemble aside, the set was also a full-circle moment for Minogue. “I was due to headline [Glastonbury] in 2005…but I was diagnosed with breast cancer, so I had to cancel,” she says. “As the years went by, I thought, ‘I’ve missed that moment.’ But I got there in the end.”