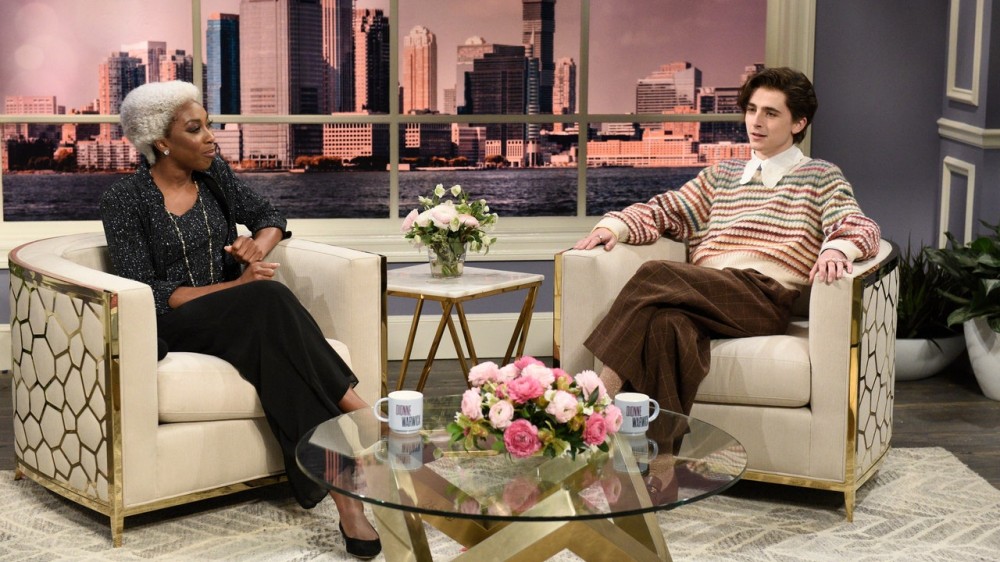 The only thing better than Harry Styles himself? Timothée Chalamet dressed as Harry Styles. Last night, Chalamet hosted Saturday Night Live for the very first time, and in one of the night’s talk show-style sketches, he played the part of the stylish singer. Chalamet’s Styles sat down to discuss the true meaning of his song, Watermelon Sugar, among other topics with Dionne Warwick (played by Ego Nwodim). “Well, I think it’s just about summer, but some people think it’s about oral sex,” he says of the single. Even better than Chalamet’s take on Harry’s charming mannerisms, though? Chalamet totally nailed his fashion sense, too.

To channel that iconic Styles vibe, Chalamet went for modern pieces with a ’70s vibe. He wore high-waisted, wide-legged trousers and paired it with a striped sweater with a Peter pan-collared shirt styled underneath. (Styles loves a Peter Pan collar.) The socks and heeled loafers combo was also extremely bang-on—it screamed Gucci without actually being Gucci, Styles's favorite label. Don’t forget the tiny details, either: Chalamet’s handful of pearl-embellished rings completed the look to perfection. The best part, however, was when Chalamet declared himself a fashion icon while in character: “I’m a singer and a sort of essential fashion man—you could say I do it for everyone,” he said with a knowing wink. Ain’t that the truth.