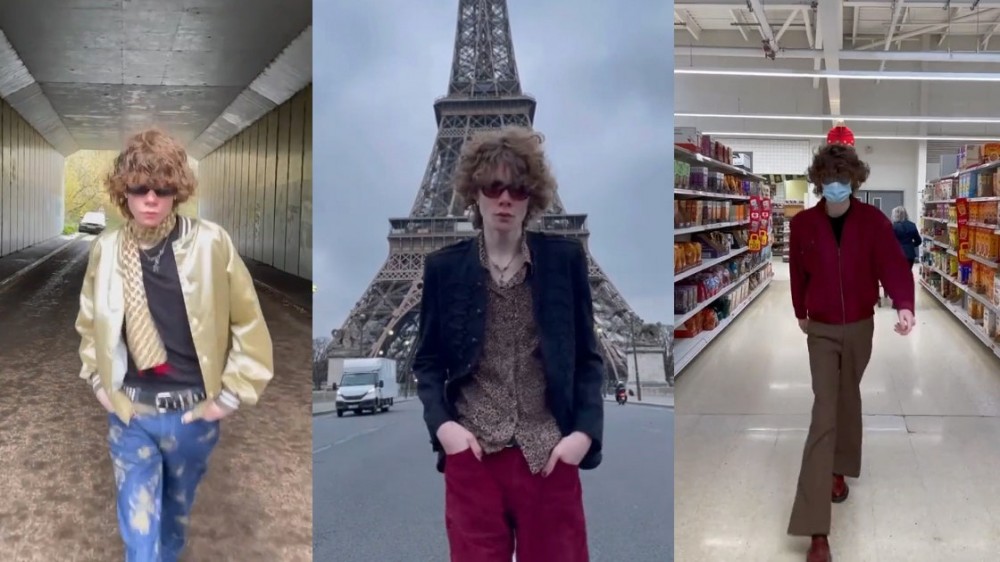 TikTok is largely dominated by trending songs, dance challenges, and overall embracing creativity, but it’s not as well known for its fashion scene. That being said, a stylish community is forming on the app—and Vogue is here to find the most inspiring, and most stylish, creators.

This week’s must-follow account is Louis Powell (@youngmanpowell), a 17-year-old model based near London, England. Since joining the app earlier this year, he uses TikTok to showcase his killer fits and signature model runway walk. “I’ve been interested in fashion for as long as I can remember, but I only started making fashion TikToks at the beginning of April,” says Powell. His followers are completely enamored with his catwalk strut, specifically. His walk is one with purpose, complete with a fierce, heavy stomp. His fans will beg him to do it in unexpected, real-life settings—such as at the supermarket, in a leafy park, or even underneath the Eiffel Tower. And when they ask, Powell delivers.

With a natural walk like that, it’s not surprising that Powell was discovered at a young age. “It started when I was hanging out at fashion weeks in London and Paris from the age of 15, and getting photographed outside shows,” says Powell. “This led to me being shot by Alasdair Mclellan for a worldwide fashion magazine called Arena Homme+, and I ended up on the front cover.” After the major magazine debut, Powell was then signed to NYC Models and Kilt Models in London, and since then, he’s booked a steady roster of gigs, including walking for Celine. “I think [modeling] was one of the best decisions I’ve ever made, and I’m so grateful for it,” he says.

Equally as good as his walk, however, is Powell’s personal style. He has a playful ’70s sensibility with a penchant for vintage or secondhand pieces. He’ll often wear patterned shirts and flares, but with cheeky additions, like a skeleton costume gloves (it sounds wild, but Powell pulls it off).

Below, Powell discusses perfecting his runway strut, what the most challenging place he’s walked in is, and what his current wardrobe looks like.

At first, it was just something to keep my mind creative during lockdown—I mean, there wasn’t much else I could do stuck inside with loads of clothes! I feel like my content has evolved massively. I used to make fairly basic outfit videos which, don’t get me wrong, are still very cool, but I wanted to be as creative I could be with what I had.

My style [has evolved] as well. For me, it changes all the time, depending on what music I’m listening to, who I’m hanging out with, or what I see online. When I first started TikTok, it didn’t seem like there was anywhere near as much creativity on the app as there is now. TikTok has grown and evolved so quickly, it seems, so I wanted to be part of its fashion scene as soon as I could.

2. What's your  process for creating TikToks?

My ideas tend to come to me randomly. I also think it’s important to share creativity, especially in times like these.  So I get inspired by things I see on social media, and when I see someone has taken inspiration from something I’ve made or done, I think that’s cool. The process normally starts with a video I’ve filmed, and then I’ll try and match the music to it depending on what the mood is. Then I’ll go back and edit the film to sync with the music, and then I may add effects.

I’ve met some amazing people through modeling, and it also means I get to travel a lot, which is fun.  As I want to work in fashion, it’s also meant I’ve made a lot of good connections. My favorite show I’ve walked for so far has to be Celine. I met loads of cool people whilst working on the show, which was filmed on an abandoned race track in the south of France. Definitely one of my best experiences. Also, a photo shoot where I had to ride a horse bareback through a housing estate was a highlight, as well as a challenge, haha!

4. You have great style: What are you into fashion-wise at the moment?

Thank you. I listen to a lot of ’70s and ’80s music, so that plays a big part in it. I’m also into oversized suits at the moment. When it comes to designers, one of the favorites is Martin Margiela, a lot of his archive pieces rock! Obviously Hedi Slimane is up there for me, too, so it was a real privilege to work for him. I also like Vivienne Westwood and what she does.

5. Where do you find your pieces? What's the most special piece in your wardrobe?

The vast majority of what I wear is vintage. I’ve always said wear whatever makes you feel happy, but I think it’s good to experiment with your style. When I go into a shop I just buy whatever looks good on me, regardless whether it’s men’s or women’s clothes.  I also get sent clothes from brands to wear, which helps a lot. In my wardrobe, my most special piece has to be these crazy iridescent trousers from Rick Owens. When you where them, you look like you just landed from Mars!

6. How did you come up with your signature runway walk? Did you have to work on it?

I thought to myself, why not do my own mini catwalks on TikTok—but this seemed too boring on its own. I needed to give it something extra. Then I got this outfit that needed a lot of attitude, and I wanted the walk to look powerful to go with it. Confidence is key! Each time I film a new catwalk video, the walk happens spontaneously to match the mood.

7. What's been your reaction to people on TikTok being obsessed with your walk?

I think it’s cool, some people think I actually walk everywhere like that. I was surprised at how strong the reaction was at first, but I guess I’m flattered by it. I just hope it doesn’t become the only thing I’m known for. As I’m only 17, I’m also trying to develop other things I do, like music and acting, as well as fashion!

8. Your TikTok followers ask you to do walks in unexpected settings. Where's the most challenging place you've walked so far?

Wow, it’s true, they do. I think for me, it was the time I got asked to walk in front of the Eiffel Tower in Paris. Luckily I had to go to Paris for work, so I was able to do it. The only problem was to get the right shot, I had to walk down the middle of the main road leading to it. So I had to pick the right moment when there weren’t too many cars flying past me. That was a crazy one. It was one of my favorite "walks" for sure. I love stepping outside my comfort zone as much as I can, trying new things.

9. What's your favorite TikTok of all time? And which one took you the longest?

If you’re asking which of my own videos I like the most, I’d have to say I don’t have a favorite, but I had a lot of fun making the one where I did a catwalk in my bedroom and played the model, photographer, and designer. As this was quite complicated to do, it also ended up taking the longest to make. I made it during lockdown as I was disappointed about missing fashion week, so I brought fashion week to my bedroom!