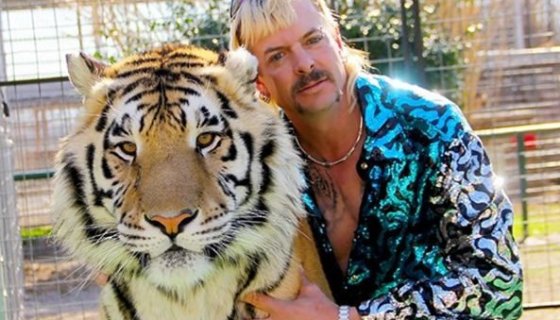 Only in the age of Trump would Netflix’s surprise hit series  turn a into the beloved celebrity he dreamnt of becoming while killing animals in his zoo and attempting to have his female tiger rival, professionally murdered.

Still, he has become a hero of sorts to the MAGA crowd amongst others and now eBay is offering his newfound fans a chance to own some Joe Exotic memorabilia as his standout pink sequin button down shirt is up for grabs. TMZ is reporting that the loud pink button down piece is amongst the collection of personal Joe Exotic shirts that has been put on the internet’s auction block and is ready to ship to anyone who’s willing to put up some big bucks.

The shirt’s owner, Vincent Baran, tells TMZ he came across the rare JE artifact surfing the web 2 weeks ago. He says he noticed Joe’s old stomping grounds, The Greater Wynnewood (G.W.) Zoo, was offering a bunch of Joe’s shirts on Facebook to whoever wanted ’em … for a price. Way cheaper than what he’s charging now though.
Vince says G.W. only wanted $100 for an article of Joe’s clothing — now, the dude’s attempting to flip it on eBay for at least 5 times that amount … and he thinks it’ll go for way more than the listed price. The reason … he says he’s seen other Joe Exotic items sell well online.Wouldn’t exactly call it an “artifact” but words nowadays do have different meanings to different people depending on how Trumpian they go about their lives.

The starting bid for the pink piece is set at a cool $650 and with millions of Americans receiving their stimulus checks this week and in the coming days don’t be surprised if someone actually puts up more than half their government payout to own a piece of tiger abusing history.

Would you be willing to put down a grip on some Joe Exotic worn attire? Let us know in the comments.