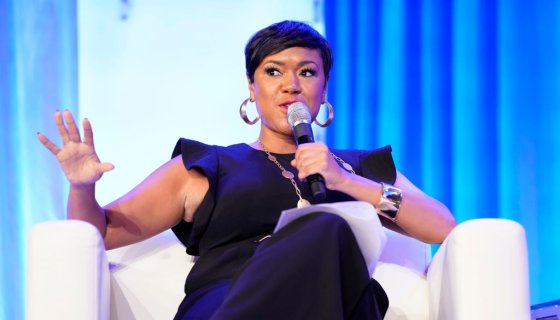 Politically interview opportunities can either go really well or be too hot to handle. One media personality had time for a staffer.

As spotted on Crooks And Liars, a recent episode of AM Joy proved once again why Black women should be celebrated and protected. Tiffany Cross, who was sitting in for regular host Joy Reid, put Bruce LeVell in his place quicker than a real estate agent. In a Q&A that was intended to discuss current-day hot topics, Diversity Director found himself in the hot seat when it became clear he is 45’s son.

When asked about the POTUS’ failed attempt to course correct the spread of COVID-19 the “National Diversity Coalition” representative claimed that the President is doing an outstanding job with the pandemic.

“We’ve tested 51 million people. There’s 328 million citizens in the United States. We’re number one in the world in testing. And number one, thank God the president shut down the country and saved millions of lives on his leadership in January or we would have a catastrophe. So I think that runs flat. I think we’ve done a great job” LeVell said.

In turn Cross challenged his argument with facts “You think 146,000 dead Americans was an appropriate response from this?” Cross retorted. The exchange quickly turned spicy with a back and forth that found LeVell desperate.

LEVELL: The President of the United States, Donald J. Trump, and we as the country, Tiffany, have done a wonderful job combatting this China virus that’s overtaking our country —

CROSS: I want to correct you. You lead the diversity coalition and you’re calling — you’re using these racist terms like the China virus —

LEVELL: it came from China.

LEVELL: It came from China.

Needless to say, Bruce just had to take his L and go home. You can see the clip in full below.