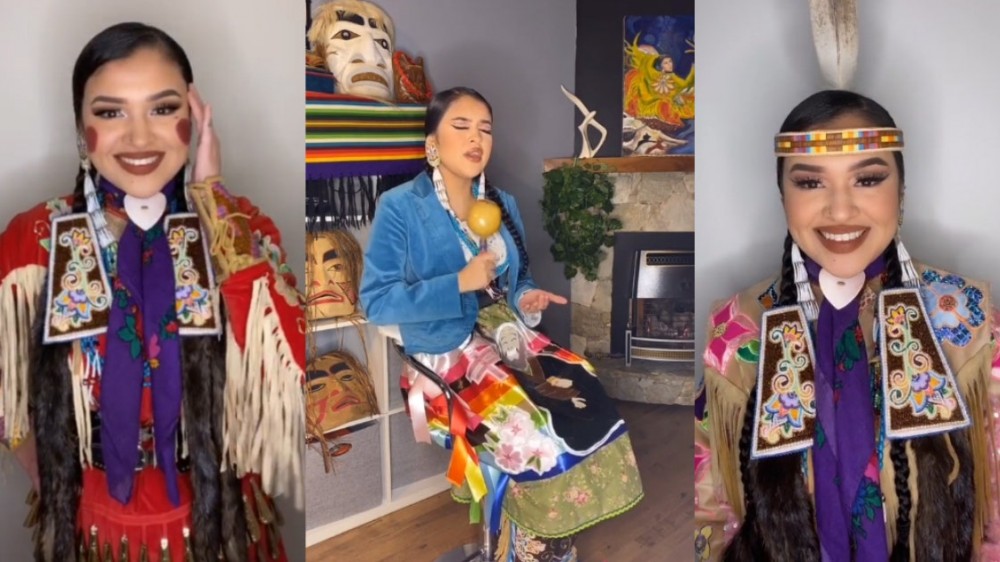 TikTok is largely dominated by trending songs, dance challenges, and, overall, embracing creativity, but it’s not as well known for its fashion scene. That being said, a stylish community is forming on the app—and Vogue is here to find the most inspiring, and most stylish, creators.

This week’s must-follow account is Tia Wood (@tiamiscihk), a 21-year-old singer and creator based in Vancouver, British Columbia. Wood champions her Cree and Salish cultures on the app, using it as a platform to educate others about her people’s history and traditions, through singing, informational videos, and doing Indigenous takes on popular TikTok trends (she recently took on the “Face Zoom” trend, popularized by Bella Poarch, in full Native regalia). Since joining the app in March, Wood has now collected more than 1.6 million fans.

“I had TikTok for a long time before I started really posting. I used to post a singing video here and there, not thinking much about it,” Wood says. “But once I posted my first ‘Make It Indigenous’ video and witnessed that crazy response from people from all around the world, it was like an awakening, because I never thought people outside my Indigenous community would appreciate the intertwining of the two [Cree and Salish] styles.” Integral to her appeal is the intricate regalia she wears: Wood grew up as a jingle dress dancer, therefore owns a wardrobe full of jingle dresses (which are embellished with metal cones), ribbon skirts, and other traditional wear that’s often worn to powwows. In a recent video, inspired by a Harry Potter house-sorting trend, she showcased these striking pieces.

Woods grew up on Saddle Lake Cree Nation in Alberta, Canada, where she quickly picked up singing and dancing, often performing with her family on the powwow trail. In both of Wood’s Cree and Salish cultures, singing is often performed to the beat of a drum and performed in their traditional languages. On TikTok, Wood will sing songs her father composed or pieces she wrote herself. She’s one of many Indigenous creators on TikTok who is proudly championing her culture, such as Cree dancer James Jones, who brings powwow dancing and educational videos to the app with more than 2 million fans.

Below, Wood talks how she learned to sing and dance, what her regalia wardrobe looks like, and which of her TikToks took the longest to make.

1. How has your Cree and Salish culture shaped you?

Growing up as both Cree and Salish was such a blessing, because I got to learn about two very different tribes and teachings, and combine them into one. In my mom’s tribe (Salish), women are allowed to touch drums, but in some of my dad’s tribe (Cree), they are not. Also, the food is amazing from both tribes! Salish has fish and berries, and Crees have moose, duck, deer, and rabbit, so I guess you can say I had the best of both worlds.

My videos were just for fun at first, but once I started gaining a following, I started noticing the lack of awareness among non-Indigenous people. Things such as cultural appropriation and issues happening inside the Indigenous community, and stereotypes in the mainstream media. So I began making content that was dedicated to educating about those topics.

3. What’s your process for creating TikToks?

The process is super different with each video. Usually for the singing ones, I scroll until I hear a beat that I think I could work with, and I’ll make like six different videos with different melodies until I find the one that fits the best. When it comes to all the other videos, I usually just wing it, unless it’s inspired by another creator! But whenever I scroll through TikTok, I always try to think, How can I make this trend Indigenous? How can I incorporate the culture into it?

4. We do love that you put an Indigenous twist on TikTok fashion trends. What do you think will be your next trend that you do?

It’s hard to say because whenever I do an Indigenized trend, it’s usually super random, and I never really plan out my videos ahead of time. But I’m loving all the rising Indigenous fashion brands like B.Yellowtail, Jamie Okuma, Lauren Good Day, and many more out there I haven’t even discovered yet, who are bridging the gap between Indigenous regalia and tradition with what it looks like to be a modern Indigenous woman in 2020 and beyond. I like to think that I am bridging the same gap in my music creation, and I hope to work with all of these fashion designers and stylists for my singles and album photo shoots, further social content, and music video treatments in the future.

It’s so important to share because, growing up as a young Indigenous girl, I have never seen people that look like me in the media. I have never seen people that came from where I come from in the magazines or on the radio. For me (and I’m sure many others), it’s so important to have that representation because it shows young Indigenous kids that they are capable of being anything they want and going wherever they desire in life, regardless of where they came from or the color of their skin. As for the teachings, it’s important because a lot of kids don’t have access to resources to learn more about themselves or their culture, but what do they have access to? Their phones and TikTok. We’re not only teaching our own Indigenous peoples, but also people from all walks of life as well who may not know the very basics of the culture.

6. When and how did you learn to sing? You seem to come from a family of singers.

I have been singing ever since I could talk. I grew up in a family of singers, such as Northern Cree, Randy Wood, and Fawn Wood, and both my parents are singers as well. It was inevitable to pick up. When we were little, it was normal to hear powwow, peyote, handgame, and poetry in the background, whether we were crafting, eating dinner, or playing outside. My parents introduced us to the songs and poetry of Kevin Yazzie, Louie Gonnie, John Trudell, A. Paul Ortega, and many drum groups. My mom was actually a part of an all-girls drum group at a time when it wasn’t really accepted, so I feel like that had a huge impact on why and how my sisters and I sing. We also would do a lot of shows as a family, as a way to practice and put food on the table as a tribe of six.

7. You’re also a dancer! Did you grow up on the powwow trail?

I dance Old Style Jingle. It’s a healing dance that came from the Ojibwa people. I started dancing ever since I could walk. Both of my parents danced. I didn’t dance for awhile between the ages of five to eight, but one night after coming home from a powwow, where I watched the women’s Jingle category and witnessed Leah Omeasoo, Cyrina Baptiste, and Lacy Albert all gracefully dance. They all looked so beautiful and proud. I told my mom I wanted to be out there, so I can feel beautiful and proud too. My sisters stayed up all night and they made me a dress and accessories. After that, my mom and I started traveling all across Turtle Island to powwows. Sometimes sleeping in our tiny little vehicle, sometimes with just enough money in our pockets to make it home. I’ve met a lot of people whom I consider my family and lifelong friends from powwow. Powwow will always be my second home, and I will continue to dance until I can’t anymore.

8. You have amazing style, with even more amazing Indigenous regalia pieces. What does your wardrobe of regalia look like?

My wardrobe consists of ribbon skirts, dresses, beadwork, quillwork, dentalium [shells], and much more! My mom and I share a wardrobe when it comes to dressing up in cultural pieces. I love dressing up and adding an Indigenous flair to my everyday wear, because I feel it’s a way of decolonizing and Indigenizing a universal language, which is fashion. I feel most beautiful when I’m wearing a piece that is made with love and good thoughts, which they all are.

9. What’s the most special piece in your wardrobe?

That’s a hard one because I love everything so much, and it all holds a special place in my heart. But if I had to pick, it would be my dresses. My mom and I make my dresses and we have ever since I was a little girl. Every stitch is made with love and represents the connection and teachings my mom and I share.

10. What’s your favorite TikTok? And which one took the longest?

My favorite TikTok of all time would have to be the ones with my mom and my singing videos. I love the ones with my mom because my mom is my absolute rock and my best friend. I’ll cherish those moments we’ve had while making those TikToks forever, and I know that I’ll always have access to those videos, even when I’m older and have kids of my own. I love the singing ones as well because I feel like those are what really started this whole thing. I never would’ve thought in a million years that my style of singing would ever get that sort of attention, so I’m forever thankful, while knowing this is only the beginning for my music career. The video that took me the longest was my Harry Potter video, because I had to change between four different looks, and also the transitions. But it was so worth it because I love Harry Potter and it made me so excited to put my own twist to it!