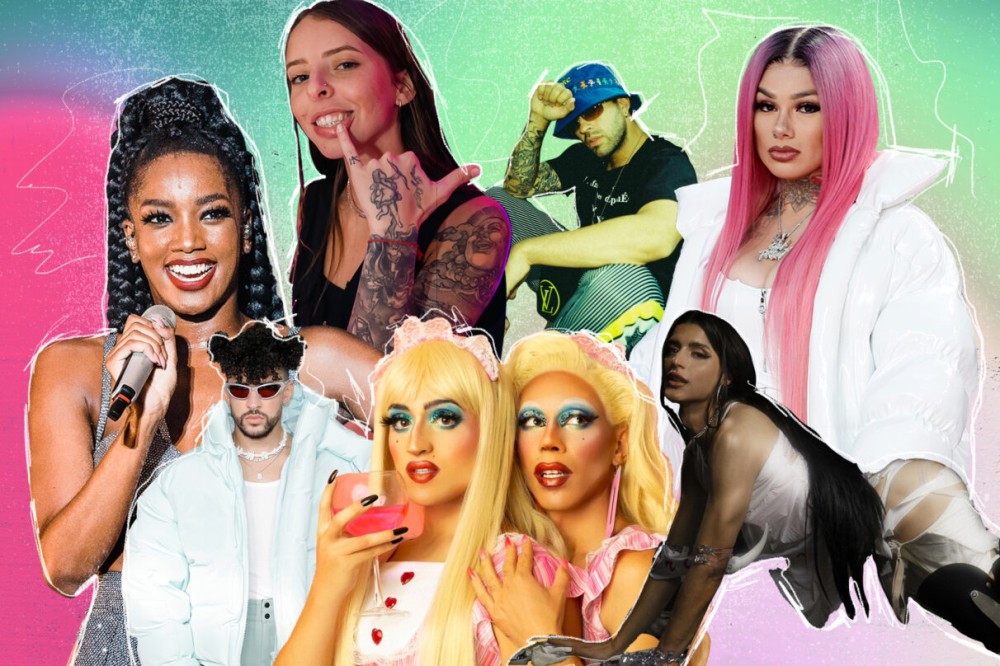 While the state of the pandemic was something we didn’t exactly get under control in 2021, restrictions were eased up around the world compared to the utter chaos that was last year. That meant that we were outside, finally emerging from lockdown and ready to get down to all the reggaeton and trap bangers 2020 robbed us from fully experiencing. It also meant that artists in el movimiento were coming out full force throughout 2021, ready to soundtrack our summers, heartbreaks, and beyond—all with its appropriate perreito.

It seems like it was just yesterday that we were witnessing reggeaton and trap transcend borders. Now, it’s a staple at awards shows, streaming platforms, and all over social media. The world finally caught up to what we’ve known for decades: reggaeton and trap have always been the vibe.

​​After much consideration, we took on the task of combing through the many (and we really mean… many) releases this year and came out with 10 that stood out the most. The order of selection was put together by the Remezcla editorial team and our amazing music writers. Here are our best reggaeton and trap songs of 2021.

Music tells stories, and from its dramatic opening notes, “Tata (Remix)” sits you down and starts spinning a tale. One of Eladio Carrión, once-a-jester and now fully cemented in his role as one of the stars of Latin trap. One of José Osorio Balvín, the kid from Medellín who rose to mega stardom and now dominates with few equals. One of Bobby Shmurda, the young gawd from Brooklyn who weathered six years behind bars only to come out as hot as ever. And one of the O.G. reggaeton boss, Daddy Yankee, who in 55 seconds leaves singed eardrums in his wake and reminds the world he can still run with the new generation. — Juan J. Arroyo

Arca dropped four albums before the end of the year as part of her Kick series. One of our favorite moments on the Venezuelan producer’s KICK ii album was “Rakata.” The title was reminiscent of Wisin y Wandel’s classic of the same name, but Arca served a new kind of perreo. Dembow beats bounced off her walls of synths as she sang about seduction on the dance floor. “A good witch that I am,” Arca boasted in Spanish. Her futuristic take on reggaeton was spellbinding and it took us to infinity and beyond. – Lucas Villa

From J Balvin to Maluma, Colombia’s Feid has been one of the leading creative minds behind some of the biggest hits in the genre—but this year he entered the reggaeton scene with his own name in the spotlight. Turning his talents towards his own venture, “Fumeteo” showcases Feid’s inimitable ability as both producer and artist on top of his game with this infectious track that delivers the essence of early 2000s reggaeton with modern upgrades. Tag teaming production credit with legendary Sky Rompiendo, Feid ensured his single was certified as one of the years best with a revamp that entrusted his first collaboration features of the year to the upcoming talents of Eladio Carrión and Mora’s heavy trap flows. – Jeanette Diaz

Up-and-coming rapper Young Miko’s career may still be short, but with only a handful of singles and a fearless delivery, she commanded the attention in the Puerto Rican trap scene this 2021. While still riding the wave of her great “Vendetta,” in collaboration with Villano Antillano, Miko dropped “Katana” back in September together with fellow Boricua artist Leebrian. Here, they weave rhymes together and lay them on us like little missiles, fueled with money, sex, and braggadocio, drawing us into a dangerous scene we’re ready to witness. Both rappers showcase a flow so tough and effortless that it shows us how healthy the genre continues to be today. – Cheky

Iza is one of the greatest music acts Brazil has seen in the past years. Juggling utterly catchy performances and conceptual approaches, she masters her vocals and dance moves as few do in the pop landscape. This is exactly what “Gueto” shows. In a colorful favela, Iza boasts off Beyoncé to Burna Boy choreographies while outlining melodies and the sing-along “Gueto” punchline. Looking at the big picture, the single by the 20-something-queen bridges Brazilian music and the contemporary Afropop wave overlapping baile funk, heavy percussion, and rolling trap snares—a road yet to be explored by many other Latin American artists. – Felipe Maia

Not even a pandemic could stop the ascension of El Conejo Malo. After releasing three albums in 2020, this year he slowed his musical output down to a handful of songs that felt like big-time events of which “Yonaguni” was a highlight. In just over three minutes, the track managed to deliver everything we love about Benito: lovelorn lyrics, unstoppable hooks, and memorable one-liners, all with a sad perreo beat. And then there’s the outro where Benito went full-on otaku, after which we were ready to hit play again and again. — Marcos Hassan

The gifted emcee Snow Tha Product had nothing to prove when she walked to her episode of BZRP Music Sessions, yet she handled it as everything depended on this performance. Switching effortlessly between Spanish and English, Snow gave us everything from rapid-fire flow to catchy delivery while her rhymes educated haters and passerby’s alike. By the time the beat switch arrived—turning the song into an electroclash banger—it became clear that “Session #39” was one of the best songs of the year. — Marcos Hassan

Álvaro Díaz’s fourth album Felicilandia is one of the few 2021 works that I’ve enjoyed from start to finish, so choosing that standout track among 16 solid contenders was not easy. It all came down to the fun task of listening to the album all over again, going about my day, and waiting if I unconsciously hum a melody. We finally have a winner. The Feid and Tainy collab “Lori Pari” was the song that switched the inner Sad Boy that rarely comes out while listening to reggaeton. The ultra-catchy chorus and melodies are glued to my mind keeping me coming back for more sad perreo vibes. – Joel Moya

With every new year, a new barrier is torn down, and reggaeton is no different. Cuir representation in the genre took its biggest strides towards the mainstream in 2021, opening the door for a truly transformative 2022. “Muñeca” benefits from not being simply a token song, but a showcase of two worthy talents joining up to make a track that’s not only important but also fun and a legit banger. A change is gonna come, and dolls Villano Antillano and Ana Macho are going to be right there when it happens (a double entendre worthy of their spicy wordplay, ansori not sorry). — Juan J. Arroyo

2021 saw the release of Sech’s third full-length album 42. And while it’s packed with solid tracks like singles “911” and “Te Acuerdas,” none of the album songs hit harder than “Sal y Perrea,” both rhythmically and emotionally. The tone is set right from the get-go: the Panamanian singer embodies the role of a club DJ who’s here to cater to all the heartbroken women on the dancefloor, serving a bit of alcohol, a lot of perreo, and an avalanche of understanding. There’s such empathy in his voice and words that it brings nothing but hope that everything will be fine, whether you still believe in love or not. And of course, it was so hot of a track that J Balvin and Daddy Yankee just had to jump on a remix. “Sal y Perrea” is yet another reminder of why Sech’s star shines so brightly in the reggaeton constellation. – Cheky