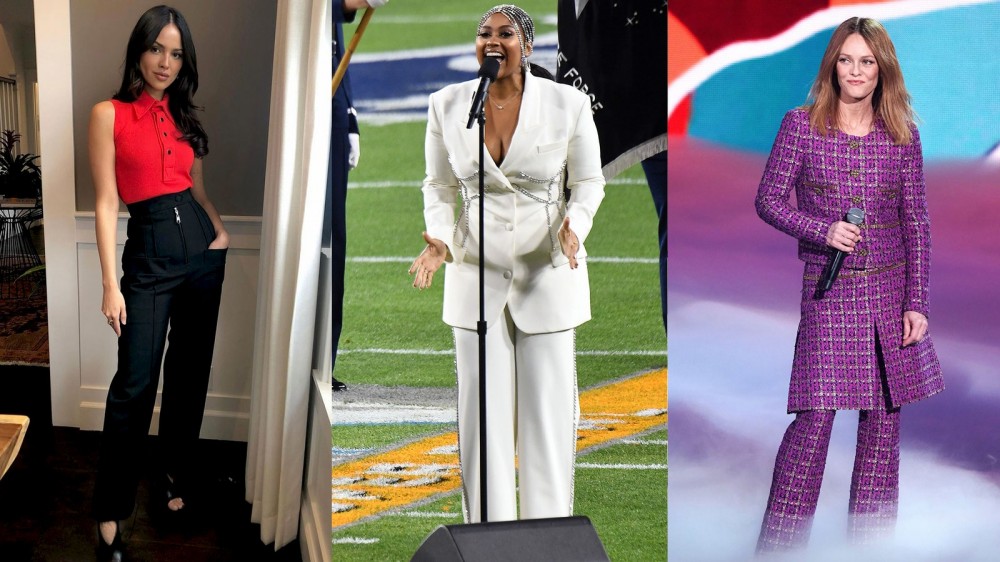 Some occasions call for the perfect LBD or a show-stopping gala gown, others require a great pair of pants. Last week as stars tackled sporting events, talk show appearances, and at-home photoshoots, many reached for the latter, seeking out all variations of tailored pants. Jumpsuits, shorts, and embellished trousers all made their mark, providing alternatives to the cocktail dresses and casual wear that have dominated recent months.

At Super Bowl, performers often dress down, but Jazmine Sullivan gave the crowd at the Raymond James Stadium a high concept fashion statement. Sullivan’s Area suit was dazzling: all-white with crystal stitching adorning the corseted blazer and each pant leg. The addition of a matching luminous hairpiece that covered her ponytail in strands of bling upped the look’s decadence factor, allowing the singer to seize her moment in style.

Elsewhere, virtual press tours and social media yielded a series of memorable outfits. To field Zoom calls during a press day for her forthcoming film, I Care A Lot, Eiza González selected a deceptively simple look from Louis Vuitton. On the surface, González’s sleeveless top and black trousers seemed straightforward, but a closer inspection revealed the intricacies of Nicolas Ghesquière’s design. High-waisted with structured seams, a silver zipper at the fly, and pockets at the hip, the pants were impeccably made and unique. Similarly complex were the trippy jeans Kylie Jenner wore while hanging out at home with daughter Stormy. Jenner has been known to unearth pieces from e-shops and under the radar brands, but her eye-catching denim find was vintage Tom Ford for Gucci menswear circa 2001.

While there were a few standout dresses—on Instagram, Amanda Gorman was resplendent in McQueen ruffles, while Lily Rabe turned heads in Batsheva’s polka dots—the week belonged to women who wore the pants. While doing press for Breaking News in Yuba County, Allison Janney opted for black and white check separates from Stella McCartney. Crafted in a sustainable stretch knit, McCartney’s pieces felt relaxed but didn’t lack refinement. And on the statuesque Janney, they reflected the perfect mix of style and comfort. That vibe also was encapsulated by Gabrielle Union, who gave February a jolt of summer bliss in Valentino’s loose short-sleeved blouse and lacy black lace shorts set. Lightweight and detailed with floral appliqué, Union’s outfit signaled the months to come and all the compelling fashion that lies ahead.