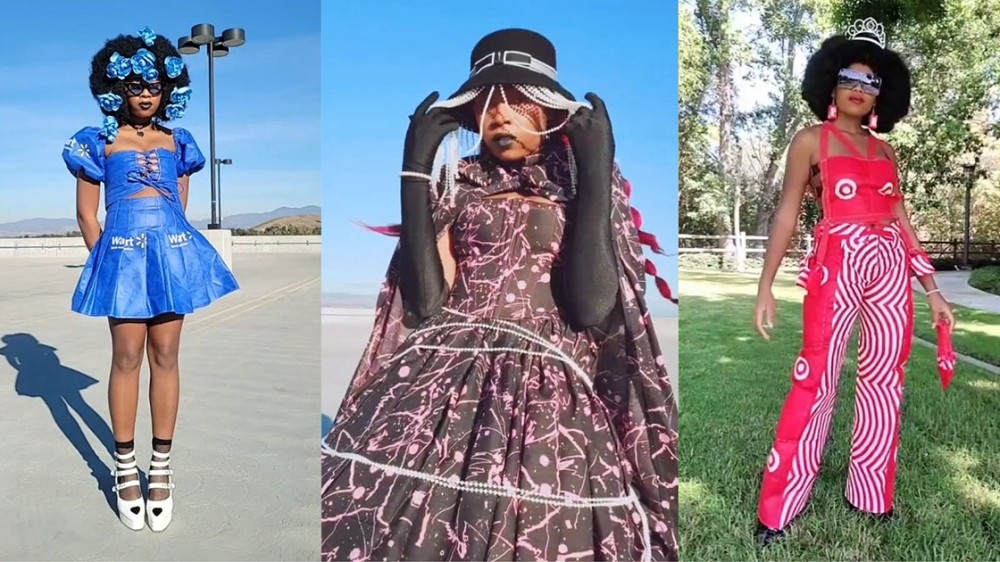 Fashion brands are always finding new ways to upcycle materials, from brands such as Orenda Tribe repurposing vintage wears into brand new pieces, to luxury labels such as Prada releasing a collection of recycled nylon accessories. One of the most interesting parts of the upcycling movement is seeing how brands can turn even the most unlikeliest of textiles into modern ready-to-wear—and Arielle Sidney, a college student in California, is a prime example of this. Her coolest pieces reuse shopping bags to make something extraordinary: On TikTok, she’s shared a jumpsuit made out of Target bags, a dress out of Walmart bags, and even a coat out of Trader Joe’s bags, among others. “Repurposing is very important to me, I see it as sort of a game,” Sidney says. “I’ll look at something old or with no purpose and be like, ‘how can I destroy this nicely?’”

The 22-year-old is currently studying drama and French at the University of California in Irvine, but dabbles in eco-friendly fashion design on the side. Sidney started playing around with a sewing machine last summer during quarantine, and having no formal background in design, she began posting her upcycled creations to TikTok simply for fun. “I didn’t really learn it per se—I just sort of started winging it,” she says.

One of her first designs to go viral was the Ikea bags outfit from last summer, which, coincidentally, was the second garment she ever made. The fitted dress, made out of the store’s iconic blue-and-yellow bags, was complete with a dramatic chapeau to match. Now, Sidney has gained over 90,000 followers on the app, all of whom have become fascinated with her DIY’d looks.

It’s not all bag-lady couture on Sidney’s TikTok page, however. Sidney also makes non-shopping bag outfits, which are often made with upcycled textiles, too. Take this paint-splattered ballgown that she made out of curtains sourced from Goodwill, or this printed ensemble she made that is perfect for TikTok’s renaissance painting trend. She also dabbles in styling videos, in which she puts together fits inspired by movie characters from Harry Potter and more.

Below, Sidney talks how she learned to sew, where she gets ideas for her designs, and what her favorite outfit of all time is.

1. Love that you make outfits out of bags. Where did you get the idea to start doing this?

I had just gotten my sewing machine, and a few days later a friend and I went to Ikea. As a joke he suggested I make an outfit out of the Ikea bags we passed by, and of course, I said yes. That’s how it started. This entire thing was not planned at all, it started as a fun thing to do during quarantine, and I just kept making more. After I finished the Ikea one, I did the Target one because I go to Target a lot, since it’s one of the main stores we have on campus. This same friend worked at Vans at the time, so naturally, I had to do a Vans one. I did the Walmart and Trader Joe’s because they were highly requested in my comments.

2. What made you want to start creating on TikTok?

School shut down and I had nothing better to do, so downloading TikTok seemed like the next best thing, even though I kept hearing it was for children. At first, I just watched videos, then I decided to recreate funny videos that were trending, but that wasn’t quite my thing. So I started doing styling videos, and that’s when my account started gaining traction and people requested for me to style certain colors together. Then I made the Ikea bags outfit, the Target bags outfit, and after that, I went back to just styling videos, and now I do both.

3. What's your process for creating TikToks? Where do you get ideas?

For styling videos that are about styling characters from a show, I will pick out the sound first, because the sound usually has a script with each character saying a line. For styling videos of me styling different colors together, I film the video first, then pair it with a trending sound. For videos with clothes I’ve made, I swipe through my feed when I’m about to film, and use a trendy sound I think fits the outfit. Styling video ideas usually come from my comment section, fulfilling requests, and aside from that, my ideas just pop into my mind randomly.

4. How would you describe your style? Do you make a lot of your own clothes?

Since I just started making clothes, most of my closet is bought. But perhaps in the future my closet will turn out to be mostly clothes I’ve made. I would say my style is artsy with a touch of vintage, because I honestly would wear almost anything. No one who knows me is surprised by what I wear anymore.

5. What's your favorite TikTok of all time?

My favorite TikTok is the one where I was looking into the mirror because I got the camera at the right angle on the first try and I was very proud of that. Also, this was the first outfit I made after the bags out of real fabric. This video is also a fave.

6. Which TikTok took you the longest to make?

The video that took me the longest was the DIY runway one, there’s a slightly longer and better version of it on my Instagram, but it was originally actually longer than that: I lost the footage when I got a new phone. It took me about 5 hours to make.