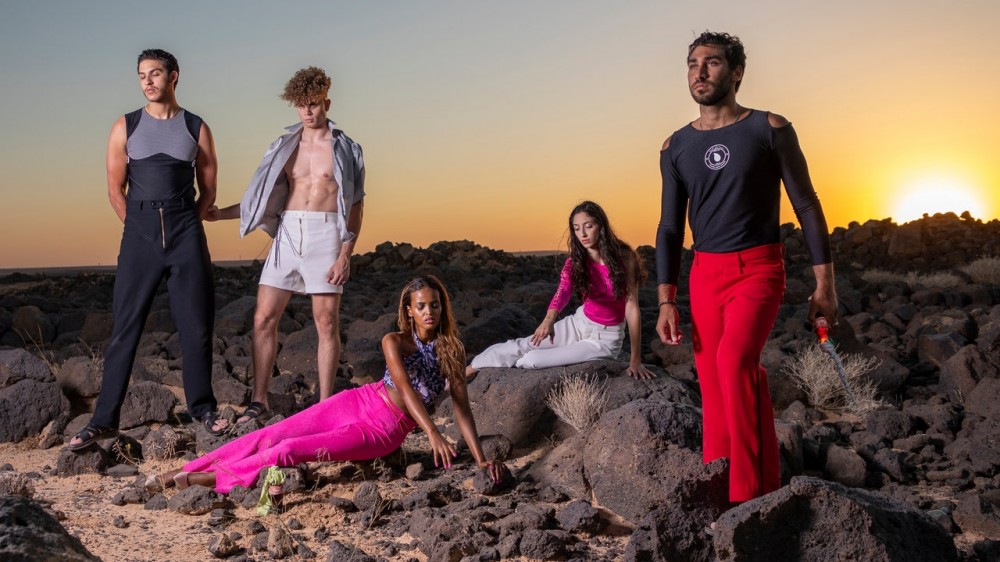 At first glance, it seems that the Palestinian label Trashy Clothing’s summer 2021 campaign, titled Pride for Pay, is a collection of hot-weather clothes made for vacationing in paradise. One model wears a black vegan leather tank top with a pair of shorts by an idyllic-looking pool. In another, a group of models exits the pool in skirts and crop tops, while others walk together through the desert. The images are both inspired by tourism ads and the glamorous imagery of Steven Meisel’s Versace spring 2002 campaign, which showed bronzed models lounging at the beach. “There are hints of that fantasy world that we are creating,” says codesigner Shukri Lawrence on the phone from Jordan, where he is temporarily staying during the pandemic.

But look a bit deeper. At the pool, a model is actively being restrained and arrested. Zip ties are hanging from the belts. Imagery of gay Arab icons is plastered onto some of the skirts, as well as sleeveless muscle tanks that boast Armenian prints as an ode to Jerusalem’s Armenian culture and population. Here, Lawrence, who hails from East Jerusalem and is Palestinian with Armenian descent, along with his codesigner Omar Braika, a Palestinian refugee who lives in Jordan, wanted to reference the ongoing checkpoints and inspections that Palestinians have to go through while attempting to cross from into Israel, while also touching on perceptions of gay culture in the Middle East.

Lawrence looked at photographs of Palestinians being arrested in his neighborhood from the organization activestills.org, to inform the collection. A women’s tank top is sewn flipped up in the back to mimic the way a man’s tank top crumples as he is being restrained and cuffed. In another instance, a pair of pink leather flared pants show the outline of the pelvic region. “You have these flared hot pants, but the crotch area is outlined to inspect this area, like, ‘Inspect my body without permission,’” Braika explains.

In order for Lawrence to visit his friends in Ramallah, Palestine, he has to wait up to two hours to pass a checkpoint, whereas, without a checkpoint, the trip would be only around 20 minutes. To quickly pass though, Lawrence and his friends often dress in skimpier outfits, in hopes of appearing more Western or foreign. In turn, Trashy Clothing underscores this point with pieces that are as easily removable as possible, using accessible zippers and exaggerated slips. “People are often checked on how they look, so if you are dressing in less, you’re less likely to get stopped,” says Lawrence. “When I was younger and we’d go out, we’d put on foreign music, like Italian music, in the car to not be asked for IDs. If we were wearing jackets, we’d take them off. It’s the concept of undressing and being ready to get undressed at any point.”

Lawrence and Braika included kitschy odes to the Arab pop stars whom they consider to be gay icons of the early aughts, including Lebanese entertainer Haifa Wehbe, Egyptian singer Sherihan, and Maria, an Armenian Lebanese pop star. “They expressed their sexual side, which, while growing up, was so new. As queer people, we saw them claiming their sexuality and their bodies, and their lyrics and their voice,” says Lawrence. Many of the pieces in Trashy Clothing’s latest collection are inspired by these music videos, including a sleeveless tank and red pants culled from Wehbe’s “Ebn El Halal.” Sherihan’s face is also printed on a T-shirt and leggings, while Maria’s face appears on a skirt.

These two designers are used to making political statements. In 2018, they presented a runway show in Berlin that featured a wall obstructing the view for half of the audience, a division that represented the one between Palestine and Israel. Lawrence and Braika embrace the discomfort. “That is part of our brand identity, the superficiality mixed with pain,” Lawrence says. “It’s about contradictions, teaching, raising awareness, putting the consumer onto not only buying clothing for its aesthetics but also for its story.”