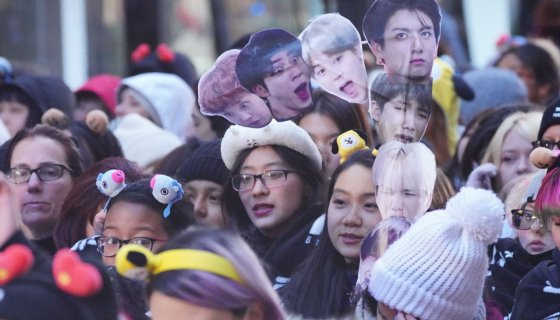 That BTS Army strong, hell, K-Pop stans, in general, are a force, and when they want to get a message out, there is no stopping them.

Guaranteed you have witnessed just how crazy K-Pop stans can be when it comes to supporting their favorite bands and spreading the word about the music genre. Well, as the WORLD is currently taking to the streets following the death of while in police custody, K-Pop stans are using their incredible presence on social media to be an ally in the fight against police brutality and social injustice.

K-Pop fans have hilariously flooded right-wing hashtags like #MAGA, #WhiteLivesMatter, and #BlueLivesMatter with memes, gifs of their favorite artists. The movement seemed to have begun after the Dallas Police Department asked the public to submit videos and tips of “illegal activity from the protests” using an app The Verge reports. Instead, Stans blessed the app with fancams (short, fan-recorded clips of artists), forcing the DPD to shut down the app.

I’m so proud of k-pop stans. I remember a week ago I saw tons of k-pop stans encouraging other k-pop stans to stop posting what they normally posted and start posting about BLM. And, well, now I stan k-pop stans. Love you guys #OpFanCam @YourAnonNews @YourAnonCentral pic.twitter.com/aNaJ3cCUfT

Oh, they didn’t stop there, #MAGA, #BlueLivesMatter, and  #calminkirkland started by the Kirkland, WA police force official Twitter handle, which also asked the public to provide information and tips about “rioting or looting” in the city felt the wrath of K-Pop stans. Not wanting to be left out the Nicki Minaj’s fanbase, the Barbz also got in on the action.

Black protestors on social media were pleasantly surprised when they clicked on the right-wing hashtags to find out they were hijacked to help in the fight against police brutality.

Now that’s what we call allyship and solidarity. You can peep the reactions to the K-Pop stans using their power for tremendous good in the gallery below.

All the K-pop stans coming together to hijack the #WhiteLivesMatter matter trend like 😂 pic.twitter.com/T2zc7HGNpK I STAN SO HARD

K-Pop stans coming through hard for the #BlackLivesMatter movement was not a twist that I predicted, but I'm 100% here for it. Most ambitious crossover event since Infinity War. pic.twitter.com/u480U2rbTR

When I saw When I found
It trending. Out why pic.twitter.com/LMzMvsZaSW

The K-pop stans have done it again!! 🤣 pic.twitter.com/qqxid0ImTy

#WhiteLivesMatter LMAO I WAS READY TO INSULT THE SHIT OUT OF EVERYONE, THEN I SAW THAT K-POP STANS ARE DESTROYING THE# DAMN NEVER THOUGHT I'D BE THAT HAPPY SEEING K-POP FANCAM 😂😂😂😂 pic.twitter.com/lb3Vpob0Wa

The way that k-pop stans have joined this uprising is EX-ACT-LY why I do not ever shit on stuff that the youth are into. You don’t want to be all “not on my lawn with your silken haired dancers” only to realize these kids are running counterinsurgencies online. https://t.co/A4E9YehsFr

i would like to sincerely apologise for my past actions towards k-pop stans. pic.twitter.com/9y8NPB3INT