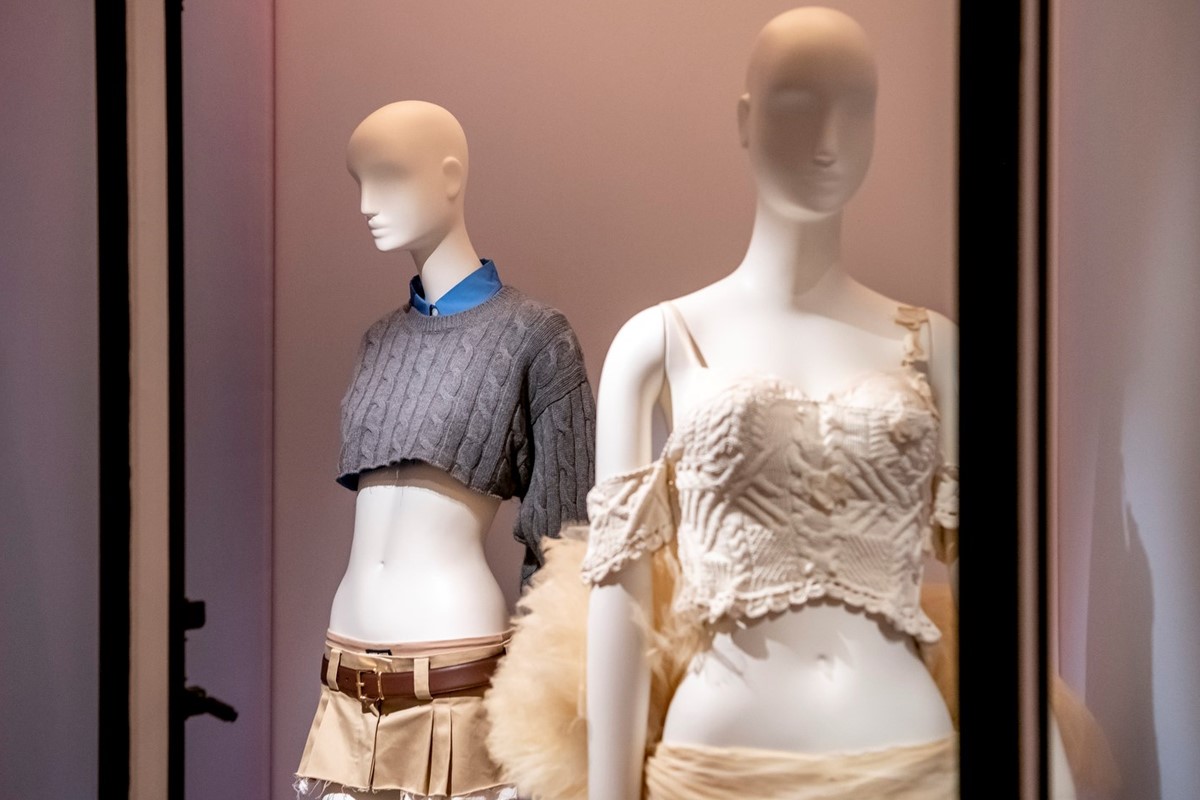 The naked savage is everywhere. If she’s not tramping down the runway in loincloth microskirts, she’s protruding from the walls via line drawings and buxom vases procured from Etsy or Urban Outfitters. Porn stars are TV stars – as are prosthetic penises – and the Brazilian butt lift is now considered its own fashion category. While the chief function of clothing is to preserve one’s modesty, today, the decision to conceal the body is often more inflammatory than baring it all. DressUndress, a new exhibition at Belgium’s Modemuseum, has set out to explore the evolving relationship between nudity and fashion as it relates to gender, sexuality, body positivity, and the so-called Roaring Twenties.

In the actual 1920s, women’s bodies (read: ankles) were liberated by higher hemlines, not unlike Glenn Martens’ belt skirts, the spidery slips of Ester Manas, or Maxmilian’s diaphanous columns. Alongside Vivienne Westwood, Alexander McQueen, Azzedine Alaïa, Rei Kawakubo, and Martin Margiela, co-curators Murielle Scherre and Eve Demoen trace the ways in which designers have used clothing to exaggerate or diminish the naked body. “What is acceptable in fashion today that was unacceptable yesterday? Whose decision was it? What is shaping these trends?,” the duo ask, gesturing to celebrity nudistas like Madonna and Kim Kardashian, while navigating the rise of ‘modest’ fashion with Molly Goddard, Simone Rocha, and muslim influencer Sarah Dimani.

If you wear trousers you are now a lesbian

Hey Eve! Let’s take it back a little. Why did it take so long to free the ankle when a woman’s decolletage had been on display for centuries before that?

Eve Demoen: It had a lot to do with the emancipation of women in society, entering a domain that was previously only for men (sports, outdoor activities, work, walking without chaperones). Showing skin would have been a reason for mockery and social exclusion in the 19th century, but once women took up more professional roles during World War I, their clothing required greater freedom of movement. When the war ended, women weren’t keen to go back to a purely domestic life, they wanted to keep an active, public role in society, and this is what we see coming together in the Roaring Twenties when skirts got shorter. The exhibition shows a Chanel 20s evening dress titled the New York Skyline Dress.

What are some of the most powerful pieces that you have on show?

Eve Demoen: A dress from John Galliano’s 1995 collection for Givenchy is an interesting starting point. A low neck, fluid gown, it references a style from the 1800s when society wanted to break with the Ancien Régime and all the restraining corsets of the nobility. Galliano goes further, of course, making the fabric completely transparent. We also have a sheer bodysuit from Olivier Theyskins’ 1999 collection, decorated with hair across the chest and collar – it’s like a second skin and gives the illusion that hair is actually growing from the model. Then we have a piece from Rei Kawakubo’s SS15 offering, which fights against the objectification of women, adding volumes and shapes to rethink the body with sculptural constructions on the hips referencing 18th century panniers. There are some more explicit pieces, too, from the likes of Thierry Mugler and Jean Paul Gaultier, not to mention the recent Miu Miu ensemble.

Rei Kawakubo once said: “The sexual overkill and exposed bodies in fashion are the result of men designing for women. I think that more interesting results arise when women design for themselves.” Would you agree that nudity has often been the result of the male gaze?

Eve Demoen: Fashion has been dictated by men for a very long time – although women have always worked behind the scenes – and they still possess most of the top roles. I do think men design differently to female designers but this does not mean that men can’t be good womenswear designers. It is just a different perspective. A woman will design from her experience of being a woman, putting a certain onus on comfort and fit. Designers like Molly Goddard, who are very much influenced by Kawakubo, share this vision. But showing the body, much like covering it up, can be very liberating. It can be a form of protest, as we saw in the 60s when skirts got shorter and young people refused to dress like their mothers.

Do you think we are now post-taboo in our embrace of the body? Maybe a certain level of shame is good because it gives fashion designers something to transgress and fight against?

Eve Demoen: Given all the social media censorship, I would say no. Fashion still has a long way to go in order to embrace nudity, especially diverse body types. In fact we collaborated with Murielle Scherre – a Belgian underwear designer who creates inclusive lingerie – interviewing trans, nonbinary, and cisgender people to talk about these kinds of body ideals. We also feature five busts modelled off real bodies by artist Esmay Wagemans to juxtapose with the standard mannequins used in fashion exhibitions. This way we want to invite visitors to think about beauty norms, values, and taboo. Of course, young people are much more aware and have the actual vocabulary to speak about this. The Miu Miu set is a good example – it’s been worn by Hailey Bieber, Nicole Kidman, and Paloma Elsesser, among others.

Why has the Miu Miu set seen such popularity?

Eve Demoen: I think there are several explanations: body positivity, post-COVID life, and the influence of 90s and early 00s fashion. The catwalk is beginning to reflect the interior world of a younger generation – those who are all about embracing the body in its many, many guises. For example, Glenn Martens for Y/Project, Ester Manas, and Marine Serre all want to disrupt traditional values. I think it’s all about ‘liberating’ the body.

And there is often real backlash against people who dress modestly today. Why do you think this is?

Eve Demoen: Because it is almost always brought into relation with religion (namely Islam, among other religions that have a tradition of covering). We included a look by Max Mara which was worn on the catwalk by hijabi model Halima Aden. It’s often considered a sign of oppression but there are many reasons why we might want to cover ourselves. In the exhibition, for example, we start with a look by Martin Margiela, who covered the faces of his models because anonymity was one of the pillars of the house. And that sits beside Kim Kardashian’s Met Gala look. A body that is covered up is never entirely covered – it catalyses a process of imagination in the mind of the spectator. In the 19th century, women were completely covered, but they wore corsets and crinolines that emphasised their breasts and bottom.

Eve Demoen: No. In fashion it’s merely an exploration of the body in relation to clothes. It’s about proportions, cut, concept, and idea. It’s not about nudity as such, but a conceptual approach to the body. Look at Olivier Theyskens’ work for example. He explores the possibilities of the body, embroidering hearts and veins onto bodysuits, like in his 1998 collection. Alexander McQueen also experimented with clothes to see how they would distort or transform the body, all low-cut bumsters and prosthesis.

What were some of the biggest lessons or eureka moments from your time spent curating the exhibition?

Eve Demoen: Fashion needs a body and the body needs to be clothed, but hardly any research has been done on this topic. It’s been interesting to unravel the sociocultural context behind concealing and revealing the body, from Mugler, Versace, and Westwood, to Ann Demeulemeester, Helmut Lang, and Prada which have always been much more conceptual. But we really need to rethink the current culture of fashion exhibitions – we need more diverse perspectives, even mannequins. Our collaboration with Murielle Scherre brought real people into the conversation which was so enriching. We couldn’t have made curatorial decisions without listening to their personal testimonies.