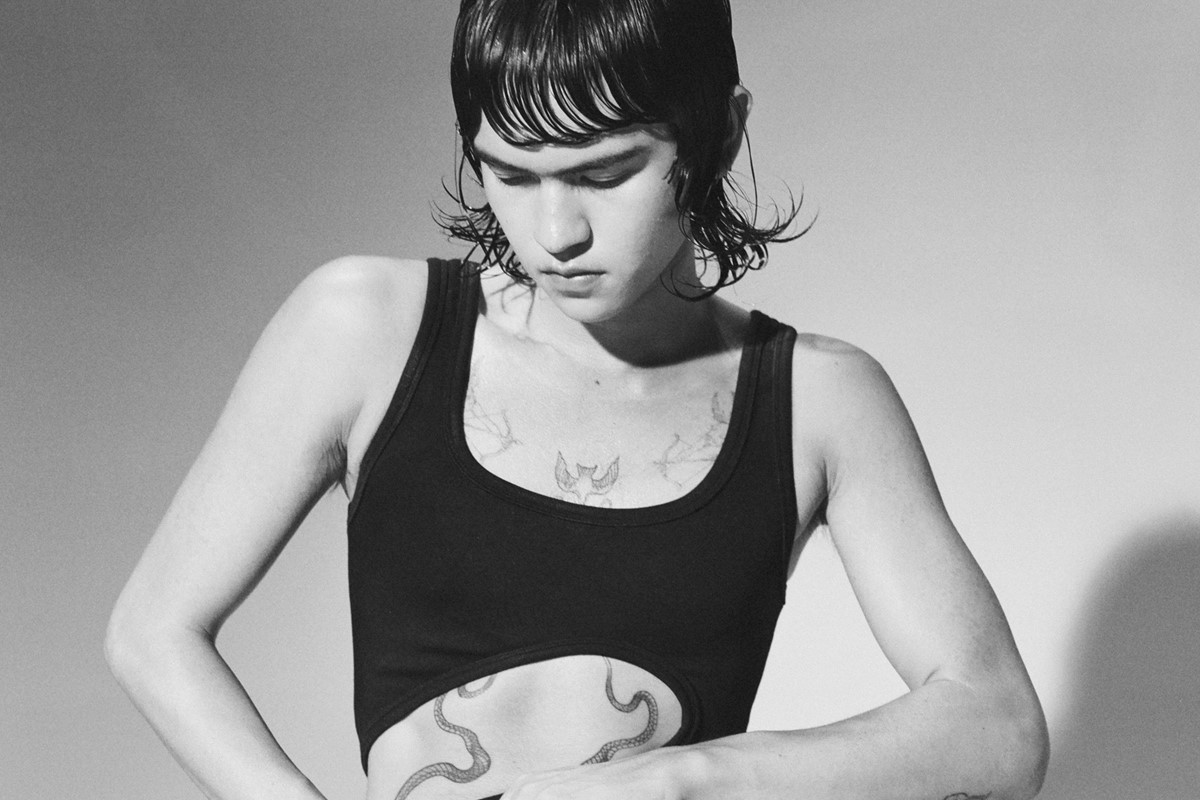 From debuting on Grindr to documenting New Zealand‘s post-COVID gay scene, Rob Tennent is a future oracle for those of us left in lockdown

Rob Tennent, a final year fashion student in Auckland, New Zealand, was doomscrolling through Grindr one lockdown afternoon when, suddenly, he found himself dazzled by a guy in a skin-tight singlet. “I just thought ‘oh my god – yes’,” he says, recalling the encounter. So, the 22-year-old decided to pluck up the courage and send a message. “Where did you get that vest?” Tennent asked. Minutes passed. “Helmut Lang” the mystery profile replied. And then, as is the case with most Grindr chats, the conversation went not one single message further. It didn’t matter though, because Tennent had already struck lucky.

The conversation (or lack thereof) with this vested torso became the basis for Tennent’s graduate show, which, for one day only, transformed the hook-up app into a shop front featuring his six-piece collection of high-stretch, scooped-out singlets. It came as New Zealand entered its third and final lockdown, which for obvious reasons, had put a splint in Tennent’s original plans for a graduate presentation. Practical design modules had shifted to Zoom, departmental budgets were slashed, and student projects were left abandoned at work stations. And, as is the story with fashion students across the globe, the school’s final year show was scrapped. “You build up to this moment for three years,” Tennent says, “I just felt like we were robbed of that opportunity”.

Not only was the choice to debut on Grindr borne out of necessity but, thematically speaking, it was kind of perfect. “I was catering to and making the pieces for queer people so Grindr just tied it all in because the clothes went pretty much directly to the consumer.” The concept behind the collection isn’t exclusively indebted to Helmut Lang though – it also takes inspiration from the black singlets that make up the unofficial uniforms of farmers and outdoor labourers in New Zealand. “I took that core garment and repurposed it with a more feminine cut,” he says. “Then I asked a whole bunch of guys that I’m friends with to come hang out in my area, take photos of themselves wearing the items, and make them their profile pictures on Grindr”. That being said, “it only lasted 24 hours because all the guys were like ‘Okay can I get back to my own messages now?” he laughs.

Having modelled throughout his degree, Tennent was already pretty familiar with the New Zealand fashion scene, so once lockdown lifted and it came to shooting an official campaign, he chose not to partake in the university-shot lookbook. “I came off snobby, but ugh – I just wanted full creative control,” he says. Instead, Tennent’s resulting editorial – a black-and-white photo series inspired by Robert Mapplethorpe’s kink imagery – was pooled together and modelled by the student himself. From the latex hand, which runs a wartenberg wheel down Tennent’s spine and the lone leather glove left suspended on a fogged-up clothes steamer, to his sweat-slicked mullet, the campaign reads (albeit unintentionally) like an anthology of illicit touch. The sense of skin-hunger visceral throughout the series. “I didn’t realise how much I missed being touched, even just by the hair and makeup artists,” says Tennent.

Tennent likes to mine the slipstream of fashion and fetish. It’s something he attributes to his strict boarding school upbringing, which, by the time he went to university, had snapped like an elastic band, resulting in collections made up of “bondage, chaps, and jockstraps”. For now, though, he’s focused on photography. “I’m actually just editing my second book, which is all about New Zealand summers and showing what life is like after COVID. But it’s all very gay,” he says. Speaking groggily today, it’s clear that there is no better man for the job. He’s fresh off a bender, which he spent at a vogue ball in the close proximity of hundreds of people.

Regaling this life post-lockdown, Tennent says “this weekend was just tits and ass” – a throwaway comment, which, although lighthearted, suddenly made Auckland feel so much further than 12,000 miles away. After all, with a June release date, perhaps even the designer’s book will be let out into the world before we will. Until then, at least, all post-pandemic fantasies are to remain vicarious, through the lens of Tennent and very, very far away.