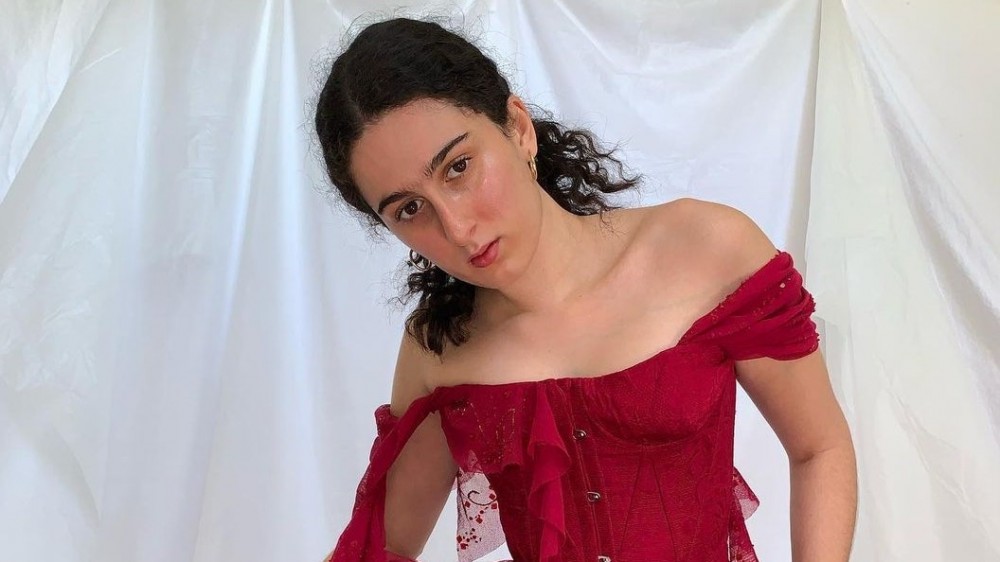 Olivia Haroutounian is not your typical college student. The visually arresting 22-year-old looks plucked out of a Pre-Raphaelite painting with long black curly hair and old-world features, and frequently wears a vintage Oasis T-shirt and Manolo kitten heels. Unlike most college students with an eye for rare designer garments, her fashion habit helps pay her tuition at the University of Houston, where she studies corporate communication with a minor in anthropology. Her Depop page, where she has 26,000 followers, is a treasure trove, including a bold-print ’90s mesh tank top by the Paris-based label Xuly.Bët and a race car–inspired pair of stretchy shorts by the Japanese label Hysteric Glamour. Balancing out these indie finds are Insta–must pieces like a Jean Paul Gaultier mesh shirt with the image of Jesus and a lime-green Gianni Versace bodysuit. She’s been a collector since she was 10 years old, so it was only destiny that she become a vintage seller.

Haroutounian grew up trawling estate sales and yard sales alongside her mother, who is a vintage clothing dealer. “She started doing it when she was pregnant with me. She didn’t want to leave me with a babysitter,” she says. While she disliked going to sales with her mother at first, Haroutounian slowly became interested in clothing. Her mother had an affinity for American designers of the ’70s, such as Stephen Burrows, Geoffrey Beene, and Norma Kamali, which sparked Haroutounian’s obsession with clothes. “I kind of fell in love with clothes there,” she says. Her first purchase was at 10 years old when she went to a yard sale of a former rock band manager. “There were ’70s clothes, like platforms and all of these really rare T-shirts,” she says. “Everything was a quarter. Ever since then, I’ve been super into collecting.” From that sale, Haroutounian has kept a Hole T-shirt, as well as an authentic John Lennon and Yoko Ono “Bed-Ins for Peace” T-shirt that she estimates is worth about $1,000.

At 13, Haroutounian started to make a profit. Her first sale was a ’60s Swiss-made record player that she bought for $50 and resold for $1,200. Later at 16, she purchased a ’90s Betsey Johnson bondage skirt from a thrift store for $1 and sold it to one of her mother’s customers for $60. She didn’t launch her website until 2017, when she was in high school and cleaning out her closet with a friend who recommended she start selling on Depop. “I was hesitant, but when I started, everything sold pretty quickly,” she says. “And I just kind of went from there.” During her time selling, Haroutounian has found some stellar gems, including a Jean Paul Gaultier tattoo dress and matching bolero from spring 1994, a pair of Versace boots from the fall 1992 S&M collection, and a Prada suit from spring 1996, which she describes as “avocado green with a Bakelite buckle.” It’s not the only celebrity-favorite piece in her collection. One of the most standout items is a red leather Chanel jacket from fall 1992, the same style that Claudia Schiffer wore on the runway.

Mixed in with the big-ticket items are pieces from less-known designers, whom Haroutounian has an encyclopedic knowledge about. Her Depop page is a mishmash of offerings that includes a plaid dress by lingerie-infused French label Chantal Thomass, a corset by Belgian-Flemish designer Kaat Tilley, as well as one by Catherine Coatney, who created ’90s goth-fetish wear for club kids. Some of the smaller labels are the most sought-after, such as Xuly.Bët by Lamine Kouyaté, a Paris-based designer known for their work in upcycling and experiential shows, and the Italian designer Romeo Gigli, whose work feels like entering a majestic art piece from the mid-1800s. “I like them because I don’t really see people carrying them and I like carrying things that are unusual and forgotten about,” she says, “I personally love this stuff. I find it hard to sell it, but it is so well-made and different.”

Currently, Haroutounian spends about three to four hours a day shopping online for clothes, and hours upon hours shopping for pieces on the weekend with her mother. When Haroutounian is ready to list, she photographs herself for four hours at a time, three times a week. “I have a tripod, but the remote broke, so I use a self-timer,” she says. “And I have a painter’s tarp that catches the flash.” With each post on Depop, Haroutounian adds a snippet of history about the item she is selling. Under a burgundy puffer by Japanese designer Keita Maruyama, she explains, “Most of the pieces from this collection were car-themed with Maruyama’s initials in the style of the STP [Standard Temperature and Pressure] logo.” For a plaid Chantal Thomass for Ter et Bantine dress she writes, “Chantal Thomass started designing around age 18. Thomass would design clothes, her mother would sew them together, and her boyfriend would paint designs onto them with turpentine paint.” Although the research takes a bit of time, she enjoys it. “I feel like people are far more interested in seeing something by somebody they’ve never heard of before and learning something,” she says.

Haroutounian has a hefty schedule between her business, which takes upwards of 40 hours a week, and being a full-time college student. But she is making it work. When asked how she manages it all, her answer is simple: “I work better under pressure.” Down the line, she’d like to use her deep knowledge of fashion history to educate others. Most recently, she has been asked to do more styling. “There is a big lack of anything to do with the arts in this state in terms of public education. There aren’t programs in high school to learn how to put together portfolios or make connections. There is a lot of talent, but everyone leaves,” she says. “I want to create something that makes people stay and build.” Whatever she chooses to do after college, it will be very much vintage-focused. “I truly believe that the vintage market is going to become as big as retail and as powerful,” she says. “Keeping that in mind, the most important thing to me is keeping it accessible and realizing that my business is a vehicle for promoting being environmentally conscious. Also, educating people on fashion history and designers people have forgotten about or never heard of.”