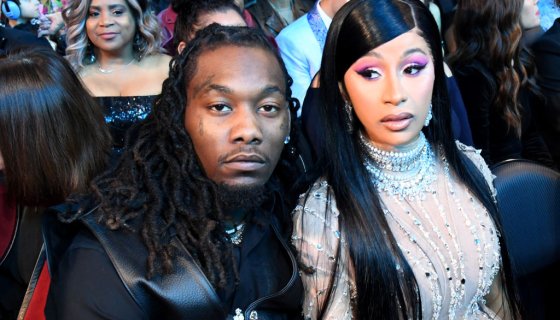 Offset got yet another reminder that despite his celebrity status he is still considered a threat by the law. He had a tense encounter with LA’s finest.

As spotted on Complex one third of the Migos was apparently out on the west coast for the Grammy Awards. On Wednesday, January 29 he and his some of his associates paid a visit to The Grove shopping mall in the City of Angels. The culture vultures at TMZ state local police were alerted that an unidentified male was spotted with a firearm inside the parking garage. According to the report the suspect left the scene and police caught up with the rapper while he was shopping.

What followed was a very tense back and forth between he and the badges. In video released by The Shade Room Offset is seen wearing a yellow hooded sweatshirt asking them why was he being stopped. He is then aggressively pushed against the wall and handcuffed.

#TSRExclusive: #Offset and at least one other man were reportedly detained tonight by police in Los Angeles. ___ The incident happened at The Grove shopping center in the Fairfax area. Video shows Offset and at least one other man being placed in handcuffs in what looks like one of the center’s parking garages. __ Witnesses at the scene tell us officers allegedly stopped Offset for reports of a weapon. LAPD has yet to respond to requests for comments. (Story developing). (📹: @the_hood_riccflair)

After a couple of hours of being detained Offset and another man were released shortly after midnight. According to several reports two other men copped to the hardware after two handguns were recovered. One was arrested for carrying a concealed weapon and the other was booked for possession of a firearm by a prohibited person.

The “Clout” rapper was later seen that night and explained the situation as a misunderstanding. You can see him discuss the incident below.