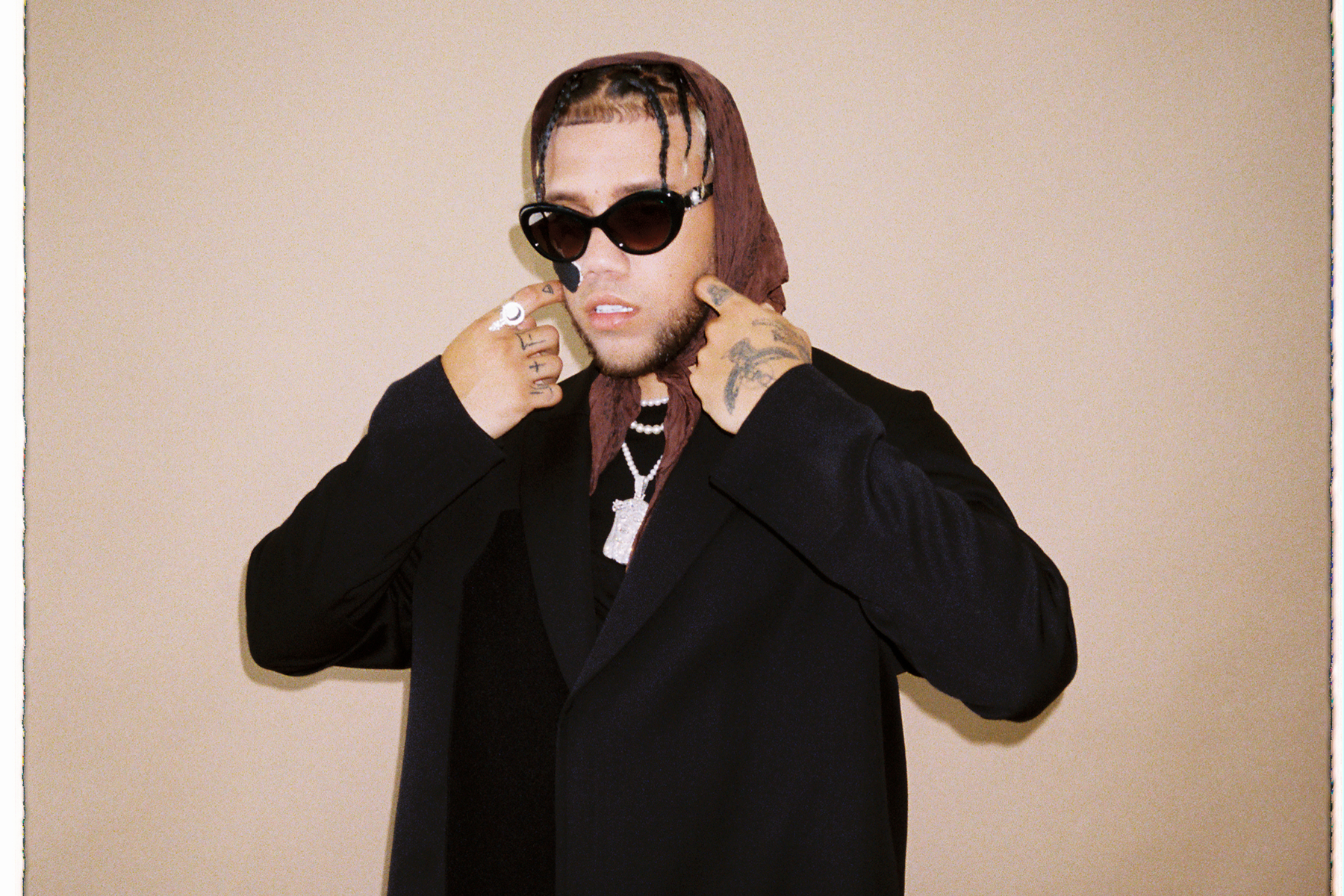 Jhay Cortez has spent the last couple of years enjoying one huge moment after another. There was the smash success of his 2019 song “No Me Conoce,” whose remix went platinum 20 times in the U.S.; the wild popularity of “Dákiti,” the futuristic Bad Bunny collaboration that landed him onstage for a show-stopping performance at the Grammys this past March; the unexpected thrill of his 2021 single “En Mi Cuarto,” which offers a dubby, dramatic take on reggaeton with the help of Skrillex.

He’s on the rise, but for fans who have been paying attention, Cortez’s ascent isn’t altogether surprising: He was one of the forces behind Cardi B’s Grammy-nominated 2018 hit “I Like It,” and even earlier, he wrote for artists such as Ozuna, Natti Natasha, and Zion Y Lennox.

Nicky Jam Has Been There Through Reggaeton's Past. Now He's Looking Toward Its Future

The Private Lives of Liza Minnelli (The Rainbow Ends Here)

Now, he’s capped off these accomplishments with his most impressive swing yet: Timelezz, an album that puts his skills as a barbed lyricist, agile rapper, and production maverick front and center. “I’m a really big fan of all music, not just reggaeton or trap, and I’m always trying to do things that don’t sound like anyone else,” says the Puerto Rican artist, 28. “My goal has always been to be a superstar, and superstars can do anything in their songs.”

Shortly before the release of Timelezz, Cortez spoke to Nuevo Culture from New York City and reflected on all of the experiences that have brought him to such a peak in his career.

You worked as a music producer for years before becoming an artist. How did you first get your start?

I started producing at 14. I was so young that I couldn’t go to studios every day, so I learned to record myself. I didn’t have a job, so it was how I made money, and it gave me an opportunity to get connections, which is such an important thing in this industry. It’s funny: I’m not much of a video-game guy, but [production software] Fruity Loops was for me what video games are to other kids. It was what I did every day. Then I finished school when I was 16, so I had a lot of time to concentrate on my music. My dream was always to be an artist, but I was attracted to any kind of creation.

[Some of] the first artists I sold songs to were Zion Y Lennox. From there, I went to Tito El Bambino. I met a friend who was connected with [the producer] Eliel, who worked with Zion Y Lennox, Don Omar, and people like that. I was so young that I didn’t have my own style yet. I was still finding myself personally and artistically, so my music sounded like other artists. I used to imitate them really well, and that’s what got my songs sold. I was such a big fan of the genre of reggaeton, so I knew all the artists and all the producers and it was easy for me to sound like them.

What was the transition from producer to artist like for you?

There was always a stigma in reggaeton that if you were a writer or producer, you couldn’t be an artist. But that made me want to change things. The best artists to me are the ones that bring their life into the art and put everything to it. I have a lot of composers now who thank me and who say, “You inspired me to try to be an artist.” And I learned a lot — I was behind the curtain, seeing what other people don’t get to see. If I hadn’t had that experience, I probably would have made a lot of the mistakes that they did, so it saved me a lot of time. Back then, there were some artists who were super-irresponsible. They’d be late, they were into their ego, and it wasn’t even all their fault, it was just how music was. Seeing that let me focus on what really matters.

Once you started working on your own music, one of your big breakthroughs was “Dákiti,” your collaboration from Bad Bunny’s 2020 album El Último Tour Del Mundo. How did you come up with the idea for that song?

I started the beat with some sounds that Tainy sent me, and I began putting the drums on it. I started thinking about when Wisin Y Yandel came out with “Sexy Movimiento,” and the era of Kat DeLuna and all these global sounds. Even before it had Benito on it, that was the first record in my career that I didn’t have doubts about. When I made it for the first time, before I even had any idea Benito was going to be on it, I went out and celebrated [laughs]. I really went out and partied, because it was something I’d been looking for. It was something that maybe I’d expect to hear from David Guetta, Diplo, or Skrillex, and being this kid from Puerto Rico who had worked on it, it was an achievement.

What was Bad Bunny’s first reaction to the track?

I think Benito felt the same thing I did. Instantly, he loved it, and he said, “I want this record on my album.” It was early, and at that point it was the only feature; I think it was just me and Rosalía who were going to be on his album. I knew he was going to take it to the next level, and I knew he wasn’t going to, like, mess it up — it could only get better with him on. He was down to go 100 percent with the vision, and the vision for the video, too.

What was it like to perform that song with him at the Grammys?

That’s one of my greatest achievements. [Not many] Latinos have sung at the American Grammys — it’s, like, Ricky Martin and then us. So for me it was big. I was just proud that it sent a message that Latinos can do anything and we’re going to do everything we set our minds to. Now, everyone is dancing to our music.

Your new album is full of exciting sounds. Did you have an overarching goal?

What I’m most proud of are the fusions, like mixing Skrillex with reggaeton. I think it’s way better than anything I’ve done before, and I found myself more than on [my 2019 album] Famouz. On that one, I figured out my foundation and my base. For this, it was like, “I know what I have to do next.” I didn’t produce on Famouz. I’m always involved in the production, like, “This song needs this,” but on Timelezz, I actually created tracks and produced a lot. I wanted to make a full-album experience. I didn’t want to be like, “Yo, I got 10 records that are done, let’s make an album” — no. I really wanted to make a dynamic album. It has a lot of what makes me the artist

I am, a lot of my feelings and things that have happened in my life. Timelezz is about what I think is timeless, what music inspires me, what sounds and feelings are timeless.

How did you and Skrillex connect?

One day, I was on Instagram, and I saw a post from Skrillex. I’ve always been a big fan of his, so I went to his page and followed him, and then he followed me back. I went nuts. It was actually the same day that I did the video for “Dákiti.” I thought “En Mi Cuarto” was something I could show him. I was like, “He can take this to another level.” I started talking to him, and I was like, “Yo, if you like this — no pressure, no obligations — but if you like it, let’s do it.” He gave me his email, and I sent it to him there, then we kept talking on WhatsApp. He added the EDM section, and he really pulled out my voice a lot. He made it sound pro.

You also have a song with the Puerto Rican synth-pop duo Buscabulla, which is totally unexpected. How did that one come about?

They’re one of my favorite bands right now. Around the time I started listening to them, a year and a half ago, someone asked them on Instagram, “Who is your favorite artist from the urban scene from Puerto Rico?” And they wrote, “Jhay Cortez.” So I reached out, and I was like, “Thank you for that, I’m a big fan, we should link up.”  That’s what I mean when I say Timelezz is all about the music that inspires me: I was like, “I definitely need them on the album.” The world needs to know them, because they’re so talented and so humble. They’re geniuses.

You’re about to kick off a tour in late October at El Coliseo de Puerto Rico. What else is coming up for you this year?

There’s more music coming back to back, and I feel like I’m in a great place in my career creatively. Even things like the tour, we’re starting at El Choli [El Coliseo de Puerto Rico]. That was my biggest dream since I was a kid. I always said I didn’t want to die before doing El Coliseo, and I even mentioned it on “Kobe in L.A.” This is what I’ve always wanted.