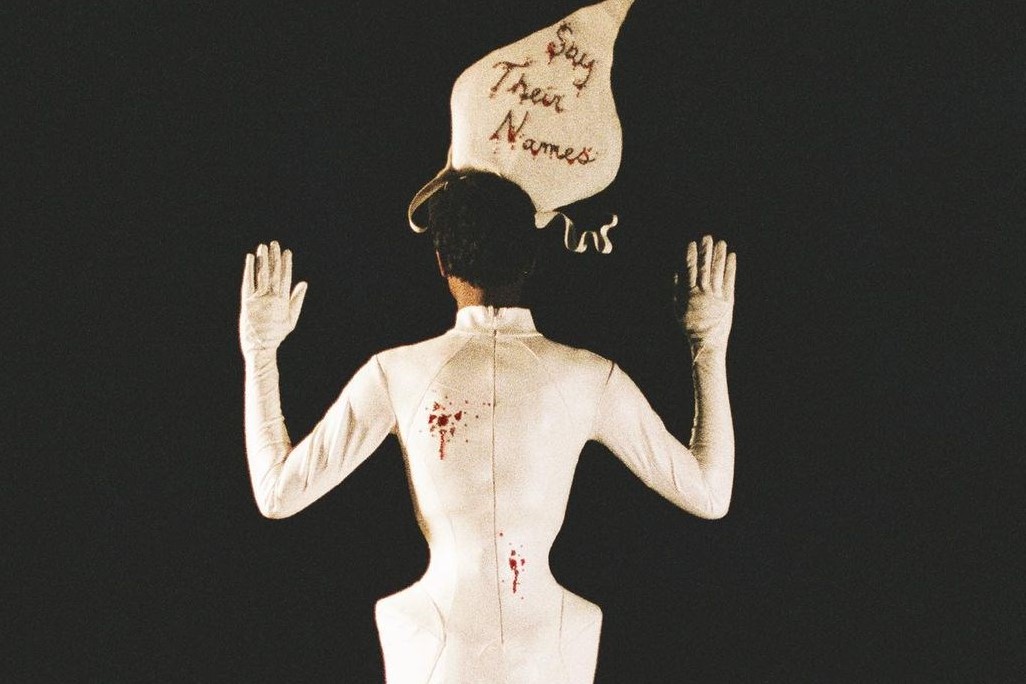 “I just did this sickening red lip and you cannot take it!” says Marko Monroe, replaying the first time he came across Symone, the shining star of Ru Paul’s Drag Race season 13, back home in Arkansas many moons ago. “She was in her bathroom looking fish-drag stunning and I just thought, holy fuck, this girl is everything”, he says.

For Symone and stylist Monroe, this chance encounter marked the beginning of a collaboration, and sisterhood, which would see the queen turn some of the most iconic looks in Drag Race herstory. So far, there have been polaroid dresses, durag trains, hair-braided LBDs, and beadwork two-pieces. Often speaking to the Black experience, these are smart, referential looks with a taste level capable of blurring the worlds of fashion and drag once and for all. “Drag can be over the top but we also want things to be timeless,” says Monroe.

Following a surprise, but inspired, snatch game choice in the form of abolitionist and activist Harriet Tubman, Symone’s fashion credentials broke new ground last weekend. In an ode to the Black Lives Matter movement, the queen walked hands-raised in a long white gown with crystal-embellished bullet holes, designed by Howie B. On her head was a lily flower fascinator, with the words “Say Their Names” bejewelled across its back. “You were black, you were beautiful, but above all things you were human,” she said in a moving IG video uploaded not long after the show had aired, having used her runway voiceover to remember the likes of Breonna Taylor, George Floyd, and Trayvon Martin.

“It’s always Symone’s point of view. I just help put the puzzle pieces together,” says Monroe, who started out as a costume designer for queer club nights. “Symone is always very clear on what she wants to look like, my job is to translate that into physical form”. In the case of last week’s episode, which was filmed shortly after BLM protests had assembled around the world, “Symone had a distinct idea on concept. She wanted to keep it minimalistic and use imagery of the lily, which despite being a traditional funeral flower, is also a symbol of rebirth and rejuvenation of the soul”.

It was also a clear nod to Mowalola, who showed a white, bullet-hole dress as part of her SS20 Coming for Blood collection. At the time, the London designer said “this dress is extremely emotional to me – it screams my lived experience as a Black person. It shows no matter how well dressed you are or well behaved, we are time after time, seen as a walking target”. For Symone, this wasn’t an easy idea to bring to life. “The Black experience is hard enough without having to live out the pain of its loss on TV and she was very cautious of that,” Monroe says. “But at the same time, she wanted to tell the truth. And the reality is that people have been shot in the back and passed away due to police brutality.”

While Monroe made his name as Lizzo’s stylist, it’s Symone who is his true muse. As members of the House of Avalon – an Arkansas born queer collective which Monroe co-founded – the duo share “a deep artistic and emotional understanding”. Symone even modelled Monroe’s debut collections, much like how Thierry Mugler and Jean Paul Gaultier famously cast queens for their shows. But could Marko ever see Avalon, or a drag queen, stepping into a creative director position at an established fashion house? “Yes, 100 per cent,” he says, without a moment’s hesitation.

“Drag queens are the underground superstars of today, if not designers, they are the new wave of 90s supermodels. Just look at Bimini, she’s a drag Kate Moss. Imagine a campaign with Bimini and Symone. There’s room for that in my imagination,” says Monroe. “I’m just so grateful that I’m helping her to get the spotlight that she deserves because Symone is and always has been a fucking star.”