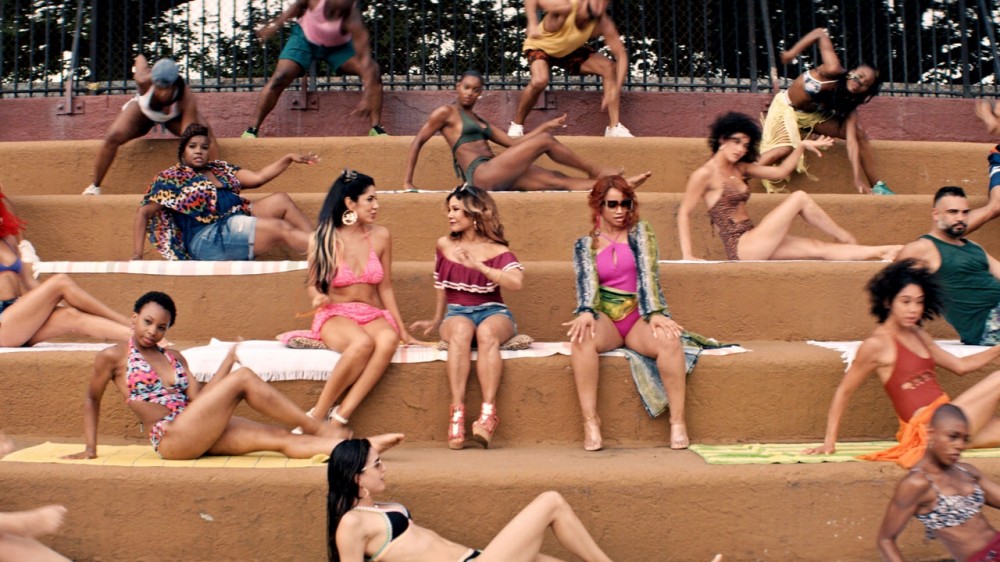 It’s cheering to know that many people’s first time back in a movie theater will be to see In the Heights. As far as cinematic experiences ago, it’s the rollercoaster of emotions we’ve all been craving, at once tear-jerking and overwhelmingly joyous. But what impresses most, perhaps, is the ease with which it moves seamlessly between the micro and the macro. Just as powerful as the beating heart of the movie, represented by the romantic entanglements of its four main protagonists, is the grandiose sweep of its elaborate song-and-dance sequences that recall the golden age of movie musicals, while also feeling firmly rooted in the aesthetic landscape of its setting, the New York neighborhood of Washington Heights. (Think: Busby Berkley after learning some salsa, mambo, and a spot of breakdancing.)

And underpinning the film’s kaleidoscopic visual feast is Mitchell Travers’s costuming. Travers has already proven himself as one of the industry’s most versatile designers, through his work on award-winning films like Hustlers, Eighth Grade, and Late Night, though the sheer scale of In the Heights presented him with an unprecedented series of challenges. First, there was simply the number of costumes needed, and the importance to keep them balanced throughout the film’s epic setpieces for its biggest musical numbers. Then there was the fact that one of its main characters, Vanessa (Melissa Barrera), is an aspiring fashion designer; in one of the film’s climactic moments, she reveals the collection she’s designed (or technically, that Travers designed) to Usnavi (Anthony Ramos), the young owner of a local bodega, leading to a fateful decision that will change their lives forever. And finally, there was the importance of delivering a sartorial vision that accurately represented the cultural specificity of its immigrant, predominantly Latinx neighborhood—one that is rarely given the big-screen treatment, particularly in a tentpole movie.

For Travers, who coincidentally spent much of the past decade living in Washington Heights, it became his most personal job yet, one that came with a strong weight of responsibility to signal the journey of his characters through clothes with authenticity. “I think that became the most important part of my job,” says Travers. “I know how to tell a lot of stories through clothes, but on this movie, the most important part of my job was to listen and to understand that experience, which is not my experience.” Here, Travers talks to Vogue about the trials of assembling over 2,500 costumes, and how his team were both inspired by—and gave back to—Washington Heights.

Vogue: What is your background with In the Heights as a musical, and what about the possibility of working on the film adaptation felt exciting to you?

Mitchell Travers: I had seen it on Broadway, and I remember by the end of the first number, I was just blown back in my seat. I actually lived in Washington Heights for about seven years, so to sit in a Broadway theatre and watch my neighborhood onstage was a surreal experience. And it was the first time I had really thought of a musical as something very much contemporary, instead of this nostalgic throwback. I think the film came to me mostly by way of manifesting—I just really wanted to be a part of it. Once I read that John [M. Chu, director] was teaming up with Lin-Manuel [Miranda, creator of the original musical and producer of the film] to take on this show that I loved, all I could think was, I have to find a way to be a part of this. I’m still pinching myself that I got to do this.

How did you combine that personal experience of living in the neighborhood with the extensive research you undertook? What was your process in the initial stages?

Well, for me, it was always very important that it still felt like a musical and that it had this elevated, celebratory exuberance to it. Obviously, I had my own lived experience to draw from in terms of its aesthetic, but I had actually just moved out of the neighborhood when we first started, so I went back there and started taking photos of things that I saw on the street, recognizing patterns or repetitions or details that I thought would be important to put into the movie in some way. I would just go up and observe the neighborhood at different times of day, and walk different paths every day, trying to absorb as much as I could, and then put it through the lens with which we were trying to tell our story, which was a little bolder. It’s New York, so people wear a lot of black, for example, but that doesn’t really feel right for a musical. So it was about finding the truth of the neighborhood but then finding ways that we could give it this heightened feeling.

What are some of the unique challenges of designing for a musical, where the actors have to sing and dance and there are these huge set-pieces?

Generally when you’re designing a film, you are helping the audience focus its attention on a few characters, but what In the Heights asks of you is to focus on the entire neighborhood. Anthony [Ramos] dancing is just as important as the woman walking out of a dry cleaner in the background, who is just as important as the bus driver or the mom taking her kids to school. So it really became about costuming the entire block and not just the handful of leads. I had to pull myself back and get a bird’s eye view on the block, to arrange the colors, to reflect the varying socioeconomic statuses, the different types of character we meet. So just in terms of scale, it was about thinking in a much larger way for this project.

What were some of the logistical feats you overcame working on such an enormous scale?

You definitely need a really strong team, because there’s no way that one human being can dress 2,700 people. [laughs] There were always really interesting conversations going on about the clothing, and I relied heavily on my team, although the way I work is also that I have to see every look before it goes out to make sure all the details are right. You think about a sequence like “96,000,” where we had 550 people or something on set that day. And everyone is in and out of the pool getting wet, you’re trying to balance the colors so that it feels like a cohesive vision; but not to the point that it feels overdesigned, because that’s something I was trying to be cautious about as well. I still wanted it to feel authentic. So it was a massive operation. You’re in a different location every day. It’s not like some classic movie musical shot on soundstages. We were in subway stations and swimming pools and city sidewalks. There was always a new challenge, and I was incredibly proud of what we were able to pull off together.

How did you go about creating and sourcing that volume of costumes?

The hunt is always fun. For me, that’s the joy of costume design. And for this, we made a lot more of the clothing that I think people would realize. It occupies this really interesting space where it has to be extraordinarily contemporary, but the project is also special enough that it needs to last a long time and feel fresh and contemporary 10 years from now. It can’t be so trendy that it dates itself immediately, but it also can’t be so classic that it's not exciting today. So for me, it was all about respecting the neighborhood. I was very clear with my team and with my own shopping that it has to be found in Washington Heights in order to be correct. It was also important to me that if we were going to take up parking spaces and disrupt the area, we should at least contribute as much to its businesses as we possibly could. But it was also a lovely give and take with the neighborhood, in that we might be waiting in line to pay for the clothes and someone would walk past and completely inspire an ensemble for another character. There’s a scene in the salon where there's this incredible dancer who brought these insane earrings along. I would never have thought to pick them up myself, but as soon as she showed them to me, I was like, these are perfect. Get a close-up!

How collaborative was your work with the actors?

You know, I think everyone was all in. There are some projects you do that you feel like you're going to your job, but I feel like a lot of us on this project were just in disbelief that we were the people getting to tell this story, and it didn’t feel like work. We had a lot of fun collaborating, and there was so much joy on both sides of the conversation. I’m thinking about Leslie Grace, for example, who plays Nina, and has this whole storyline of wanting to disrupt and bring change. So we were looking at 1970s colors and shapes, and I pulled out this vintage crochet rainbow top that I had. Her mom was actually with us that day, and they locked eyes with each other, and her mom was like, “I have goosebumps,” and Leslie started welling up a bit. I was thinking, ‘Oh no, what's wrong!’ But as it turns out that within their family, rainbows have always shown up in a significant way at major milestones. It was just this cute moment where everything fell into place.

What were your conversations like in terms of representing Latinx culture authentically on-screen, and how did the actors help guide those?

I think that was the most important part of my job. You know, I deal with clothes, and I can tell a lot of stories through clothes. But on this movie, the most important part of my job was to listen and to understand that experience, which is not my experience—to have open and honest conversations about these subjects, to just listen and understand their perspective and try to tell the same story that I was told, but to tell it through clothing in a way that made sense with the arc of the film.

I was a big fan of your work in Hustlers. Come awards season, it can often feel like contemporary costuming is overlooked in favor of period dramas, year after year. I’ve even seen talk of there being separate categories. How do you feel about that debate?

I think there is one way to do this job, and that is to immerse yourself in research to truly understand what your actors want to bring to the project, to be a part of the world that your director is developing, and to answer the questions that the script asks. So that is my approach, whether it’s set in the 15th century or 2020. That’s how you do this job. And I think it’s unfortunate that institutions don’t always recognize contemporary designers in the same way that they recognize period designers, because ultimately we should be rewarding the work, and the work is the same. I think if you look back at some of the more important costumes over the past 20 years, the ones that come to mind for me aren’t necessarily the corsets. It feels like the tide is turning, though, and I think audiences are much more aware of the power of clothing.