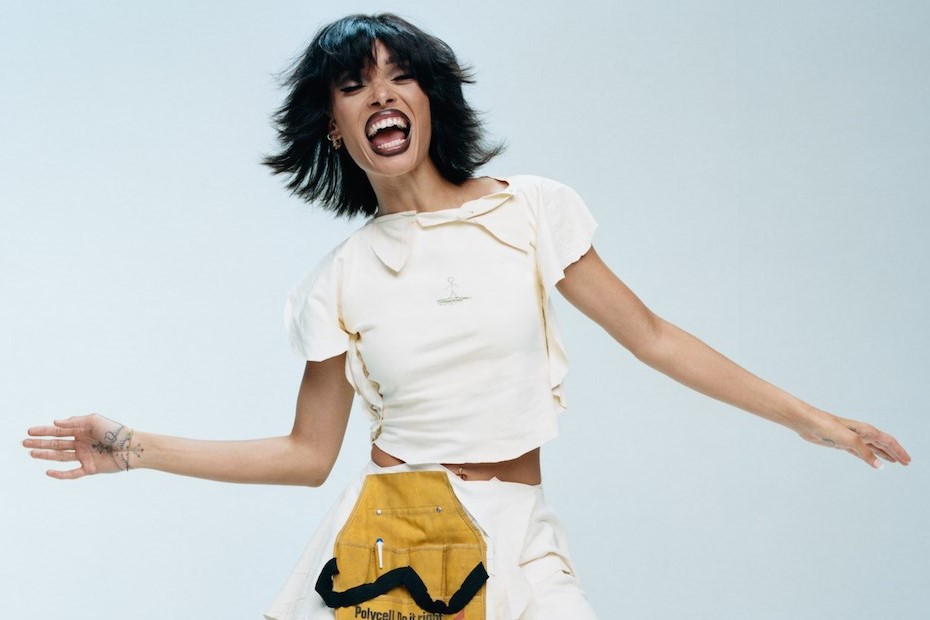 Adwoa and Kesewa Aboah, Bel Powley, and more camp it up in a short film for tongue-in-cheek London label House of Gorgeousity

“It all started as a joke… seriously. I made clothes from household items and now I’m doing an interview for Dazed about it,” Tegen Williams laughs as she fills me in on her brand, House of Gorgeousity, and its IGTV promo series.

A pastiche of everyone’s favourite Bravo franchise, The Real Housewives of Gorgeous City stars the likes of Adwoa and Kesewa Aboah, Bel Powley, and Williams’ Memory of Speke bandmate Ned Smith, who each play equally deranged wives and husbands. From the outrageously referential characters – Williams herself plays a Lisa Vanderpump / Theresa Giudice hybrid attempting to launch a fashion career à la Lisa Rinna and Dorit Kemsley – to the plumped-up lips and painstaking glam by make-up artist Celia Burton, the series is a riot.

The idea for the brand itself (though Williams laughs every time I describe it as such) was born at friend and photographer Oliver Hadlee Pearch’s birthday picnic earlier this summer. Williams, a sought-after image maker herself, had spent the day shooting in Molly Goddard’s London studio in a long-sleeved black top and jeans. “I was sweating buckets. There was a horrible heatwave and I wouldn’t have survived outdoors (in what I had on).”

Making a beeline for the ‘basic needs’ section of the local corner shop, she plucked a tea towel and a pack of shoelaces from obscurity and tied the household items to her body. With her newly fashioned bandeau secured, she and her top made their debut at a party of fashion insiders. “Pretty much as soon as I arrived, people were asking where I got my top from. People told me it was iconic – they loved it,” she recalls. “I told them it was from ‘House of Gorgeousity’ just to have something to say. I hadn’t considered it to be ‘my brand’ or anything. I was just joking!”

As the best ones often do, however, the joke rolled on. A week later, stylist and fellow picnic-goer Emilie Kareh messaged Williams asking to see more pieces from House of Gorgeousity. Tickled, she rummaged through her things, pulling out as many items as she could find. “I’ve always made things – clothes or collages from friends. It’s just part of who I am,” she says. Eventually, she settled on items including wash cloth halter tops and tea towel slip dresses, which ended up featuring in a Pop shoot lensed by Harley Weir. “Yeah, I really didn’t see that coming,” she adds, laughing.

With the idea sparking in her brain, Williams pulled in all the favours she could to bring it to life. Recruiting former contributing Dazed Beauty editor Jawara Wauchope, movement director Les Child, and Hadlee Perch himself, she also enlisted her sister Bryher and her boyfriend Joe Deen to manage production. The cast was in good hands in this respect, given the two’s combined credits in reality TV include Too Hot to Handle and Made in Chelsea. With Williams writing bespoke parts for each character, no effort was spared. “Tegen’s so funny, but she’s also so serious about anything she does,” Kesewa Aboah explains. “Even with this, which started as a joke because we were both watching so much Housewives, when I turned up on set it was so professional.”

The finished product comprises a punchy, high camp lookbook, and a three-part series that sees characters dressed head-to-toe in House of Gorgeousity looks. With the ‘Leyland Dress’, the ‘River Seven Tea Towel Slip’, and the ‘Stockinette Under Suit’ among them, they’re truly creative propositions – so creative, in fact, that HoG star Bel Powley jokes that she’s thinking of wearing them to walk down the aisle. “Whoever said household cleaning items weren’t beautiful were clearly very wrong,” she writes in an email.

As we reach the end of our conversation, I attempt to channel my inner Carole Radziwill and very seriously ask Williams if her work for ‘the House’ draws any inspiration from the likes of Susan Cianciolo, BLESS, or Bernadette Corporation, who all similarly subverted the idea of what a fashion label can be. She considers such comparisons and wrinkles her nose. “I guess only in the way that I’m highlighting The Emperor’s New Clothes element of the industry. I’m wearing a tea towel and it’s cool because someone says it looks cool,” she says. “Putting the cast in clothes made from household items feels very Housewives. Lisa Rinna’s duster cardigans! The Maloof Hoof! It’s all about selling something and I think that’s really funny.”

Now she’s got ‘season one’ out of the way, what are the next steps for The Real Housewives of Gorgeous City, and could a reunion be on the cards? “Yes!” says Williams. “I’d love to bring the Housewives back together – ideally with my brother Arthur in Andy Cohen’s seat.” For both the drama and Empress Tegen’s New Clothes, I know I’ll be tuning in.

Click through the gallery above for a look at the collection.