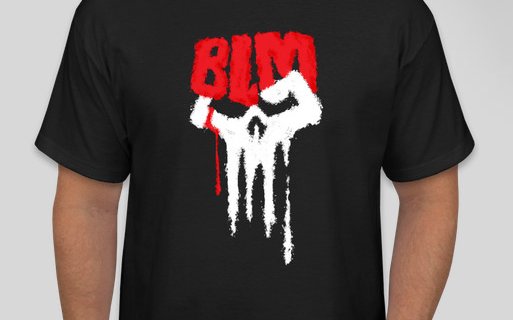 For decades Marvel’s The Punisher skull symbol became synonymous with fades being handed out to the bad guys. And though white supremacists and police , the Punisher’s co-creator is making sure that will no longer be the case.

Huff Post is reporting that Punisher co-creator Gerry Conway was fed up with law enforcement rocking the emblem that he helped create and has decided to kickstart Skulls For Justice which features shirts with his famous Punisher skull logo with “Black Lives Matter” and “Say Her Name” printed alongside of it.

Having already sold more than a thousand pieces altogether, the new Skulls For Justice shirts are bound to be a big hit amongst comic book fans and Black Lives Matter supporters. Alt-Right nationalists though? Not so much.

In a series of tweets, Conway continued to explain why he decided to start the project and reminding everyone that new shirts are on the way.

It's a collection of artist-designed t-shirts raising funds for #BlackLivesMattters #BLM by claiming a symbol of oppression as a symbol of justice. The first three shirts are available for purchase now, and another shirt will be added every two days.

Please support this fund raiser– in order for each campaign to fund there needs to be a minimum number sold (visible on each link). If the minimum isn't met the funds don't get released and the shirts don't go out. So buy for yourself, buy for friends and loved ones.

It's for a great cause– an historic cause. They're also awesome shirts. I've already ordered one of each. Laura has ordered one. Join in!

Yeah, that MAGA crowd ain’t going to be too happy about this. Won’t be surprised if his comments are filled with hate and death threats going forward. They’re a real sensitive bunch.

Still though big props to Mr. Conway for taking such steps to make sure that his work is no longer affiliated with oppression and instead used to encourage equality and justice.