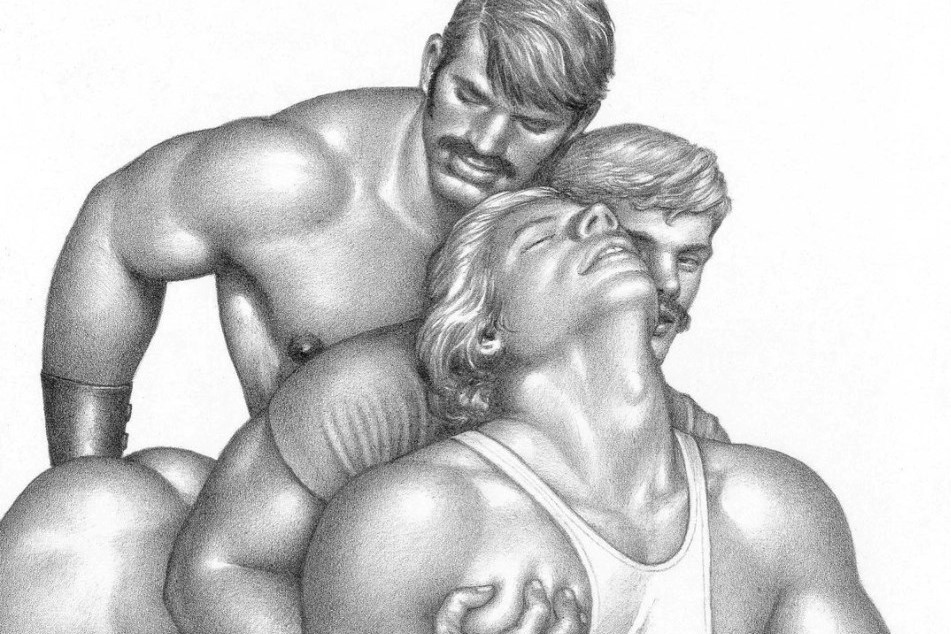 Tom, notoriously, could not draw without an erection, plumbing his own experiences of gay cruising – which is how he met his partner, Vali – as he spilt his fantasies of a homo wonderland onto the page. As saccharine as they were salacious, there is a familiar, almost kitsch quality to Tom’s eroticism, as if Enid Blyton had done a round of the dark rooms in Berghain. The humongous smiles of Tom’s protagonists, set against twee pastoral landscapes and cosy log cabins, are matched only by their pendulous appendages, which one critic, Camille Paglia, deftly described as “flaunted, mammoth phalli, thick and fibrous, like serpentine vines or trees, brimming with sap”.

“As a gay man and a designer, Tom of Finland has always fascinated me,” Anderson says. “I collect all types of art, including his drawings. To be able to use them in a JW Anderson collection is so exciting. I am really proud of this year’s collection and love that we were able to expand it to include ready-to-wear.” The collection can be shopped online from June 11 and instore from June 14. With that in mind, here’s everything you need to know to get your fill.

Tom’s first crush allegedly came at the age of five, a thickset farm hand named Urho, who would be incarnated countless times throughout Tom’s fertile depictions of manhood. At 19, he moved to Helsinki to study art but was soon caught up in the Russo-Finnish war, and then WWII, during which Finland allied with Germany. Long after, in 1956, Tom was working as an advertising exec at McCan Erickson, when, at the suggestion of a friend, he first submitted his personal erotica to the American gay mag Physique Pictorial.

His illustrations found a natural home in the USA, not only because they were in step with the gay liberation movement, which was progressing much faster than in his homecountry, but because there was something tangibly American about his work – all the sports, outdoors, and brotherly camaraderie. Where photographs of nude men came under strict censoring laws, Tom’s illustrations were able to be sent through the post – since they did not make claims on real life events. The artist didn’t go to the US until 1973, though, when he moved to California and lived off the sales of his work.

Tom’s vision of hypermasculine men was almost pagan in its worship of wedge-like silhouettes, muscle, and chiselled facial features. His subjects, burgeoning from all angles, would fill stark white pages like greco-roman sculptures or emerge from wooded forests and rivers like impish deity. While this would be considered problematic within contemporary queer culture, Tom felt it important to demonstrate that machismo and gay sex could coalesce, countering the “pansy” stereotype that society associated with other queer men like Oscar Wilde. The artist’s work is noted for its more progressive stance on gay sex, however. Within Tom’s illustrations, tops and bottoms are presented fluidly without the loaded male-female, dominant-submissive dichotomy – bottoms are just as big and forceful as tops!

HE LOVED A MAN IN UNIFORM

Policemen, lumberjacks, soldiers, office workers, mounties, bikers – there was not a subset of the patriarchy which Tom did not haunt for his own pleasure. The illustrator came out of the closet relatively early in the 1930s and soon started to depict the temporarily stationed soldiers he would meet whilst cruising. Then, during the war, he became enamoured with the German army’s striking military uniforms, which became an enduring reference point – dressing his men in peaked caps, suspenders, and stomping leather jackboots.

But Tom’s work is not without criticism, much of which has centred around his apparent sexual glorification of the Nazis, which hot-headed pundits took as a sign of allegiance. In reality, Tom was taken by their masculine ideals but denounced their belief system entirely. Either way, the artist owes his handwriting to the fascist-classical propaganda which circulated in his early life – which was full of the broad-shouldered, square-jawed Aryans on which Tom seemed to model his men.

VIVIENNE WESTWOOD GAVE AN UNLIKELY GATEWAY TO HIS WORK

It’s thought that Vivienne Westwood was the first to slap Tom’s erotica onto clothing – a move which would ultimately lead to her arrest in 1975. From her iconic SEX boutique on the Kings Road, Westwood sold her, now infamous, Cowboy t-shirt, which depicts two cowboys, dicks grazing, as they adjust each other’s neckerchiefs. On discovering the lewd look, one of the designer’s salesmen was arrested and fined for public indecency, with Westwood and Malcolm Mclaren, her then partner and collaborator, prosecuted under obscenity laws for “exposing to public view an indecent exhibition”. The illustration actually turned out to be the work of Rip Colt, a clear successor of Tom of Finland, but many cite this as their first interaction with the Finnish artist.

HIS ART ADVOCATED FOR AIDS AWARENESS

After the spread of AIDS, Tom experienced a huge burden of guilt. “He had given people the confidence to go out and explore their secuality and he began to wonder if he was partly responsible for sending all those young men to their deaths,” Durk Dehner, a friend and founder of the Tom of Finland foundation, told The Guardian. Tom, as a result, would use his art as a tool to promote safe sex. In the mid-80s he started to include condoms in his illustrations, which became deliberately utopian and optimistic, bursting with vitality, as if to balance the hundreds of thousands of men who were wasting away. Since then, the foundation has lent Tom’s designs to various sexual health initiatives, with his mischievous men emblazoned on condom packets and advertisements for HIV prevention. Tom, himself, died of emphysema in 1991 aged 71.