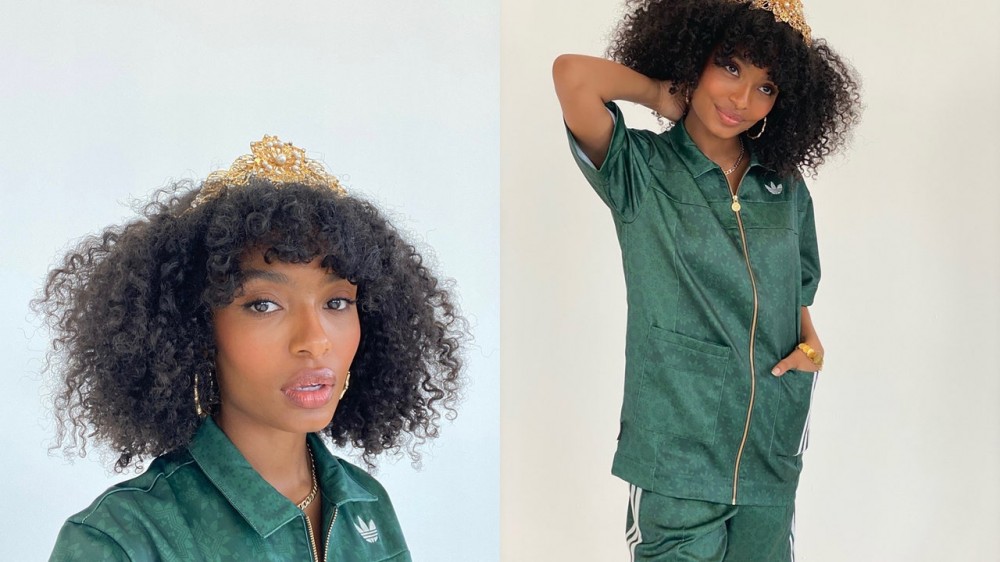 Yara Shahidi always goes the extra mile. The actress, producer, and Harvard undergrad gives her all with each project, especially when it concerns fashion. Last month Shahidi debuted a well-received sportswear collaboration with Adidas, which included stylish updates to tracksuits and (of course) the brand’s famous footwear. This month she’s back with round two.

Given the success of the first release, Shahidi knew the follow-up had to take things a step further. Her initial release incorporated details like Farsi text and patterns inspired by Iranian architecture, and this time around, she expands on those concepts. “So much of what I wanted to convey was about the ways we choose to express our cultures and identities,” she shared on the phone from Los Angeles. “It may seem like a lofty goal to try and communicate those messages through articles of clothing, but I’ve been pleasantly surprised.”

On the surface, the lineup of colorful pieces feel like a luxurious athleisure collection, but look closer, and the details come to the forefront. Shahidi and the Adidas team drew inspiration directly from her family. Iranian on her father's side and African American on her mother's she like many people is a product of two cultures. That is aptly represented within her Adidas pieces, where personal references are peppered throughout. Her grandfather’s rug shop gets a shout out via prints on tracksuits and the rich colors of her patterned “Campus” sneakers—and the artwork of Iran. Seeing her name written in Farsi worked into the designs was powerful. “Initially, I didn’t understand the significance of taking an alphabet that has been weaponized and presenting it in fashionable light,” says Shahidi. “I’ve been so moved by people’s responses to that, seeing that such a diverse group of people gravitated to that was cool.”

To keep her homage respectful and allow a multitude of people to wear her designs, Shahidi avoided going overly literal. The symbols and patterns nod to Islamic geometric patterns, but they still feel original and connected to Adidas’ iconography. “There are references in there that are so specific to me personally, and I was curious as to how well those elements were going to translate,” says Shahidi. “Not only to people of my culture but globally as well. I [wondered] if it was going to feel niche —I didn’t want the pieces to simply be wearing Iranian heritage on your back. Instead, people have embraced the emblems. So many of us are bicultural and online; I’ve been seeing people sharing their stories in connection to the pieces in a truly lovely way.”

Throughout the collection, Shahidi sought out points of commonality: colors, and shapes of significance to many. “Many of the colors we chose came from our research photos; we were trying to find a through-line with the shades,” she says. “Whether it’s the yellow that could be viewed as a reference to saffron or the mustard seed, or that green that we introduced in drop one, these colors are touchpoints for so many different cultures as are the silhouettes. Some patterns provide a bridge between cultures as well, and their prevalence was interesting to explore.”

If the silhouettes of the clothes scream old school Adidas, that was precisely Shahidi’s intent. After seeing a snapshot of her grandfather from the 1960s, Shahidi sought to bring a few of the vintage styles back in honor of him. “When I was pulling images, I started thinking back to what I have been surrounded by my entire life,” she says. “Papa, who is my grandfather on my mother’s side, was a prominent figure in the [American] civil rights movement and has inspired so much of the work I do. I talk to him regularly, and we’ve got such similar styles. He rocks those tracksuits to this day so being able to look back at pictures of him and incorporate what I love about his retro look into this was incredible.”

The opportunity to present her Iranian culture in a new light was equally exciting. “Unfortunately, Iran is often only discussed in the news when talking about [politics],” Shahidi explains. “I can’t speak to the culture in its entirety, but I can speak to how its beauty has impacted my life. For the collection, I was going back to images of Iran in the 1960s and those color palettes, the uniforms of its soccer team, and pictures of my grandfather on my father’s side.”

Working amid the constraints of the COVID-19 lockdowns, Shahidi couldn’t rely on a team of fit models and focus groups. Instead, she sourced opinions from her family. “I would be tapping on my brother’s door saying, ‘it’s 7 AM but Germany is on the phone. Will you try on this tracksuit for me?’” says Shahidi. “My entire family was involved. At one point we even texted my neighbor and asked them to come over and try on samples—everyone was called to action!” During this time, she also had to do more with less. “Normally, I’d see ten fabric samples in person and be able to talk about them; now I don’t know how many little swatches of fabric I have strewn about the house,” she says. “I went from having lots of time to play with the tiniest details to having to be definitive about what I wanted. There was a learning curve, but I appreciated it because it made me distill what was most important to me into the collection.”

The final product is an elegant reflection of her tastes.“I already knew what I wanted to wear all summer, and we made it a reality, one that feels new and special,” she says. “I felt empowered in my choices and decisions, the design team is amazing, and I was more at ease because [now] I had the terminology, deadlines, and details down.” Though she brought the previous collection to the red carpet at the MTV Movie Awards back in May, when she wore a silk tracksuit of her own design, she hopes her latest pieces are enjoyed every day. “With our first collection seeing it all out in the world was emotional,” says Shahidi. “This time, you may not wear these [pieces] to an awards show, but they’re great additions to people’s closets and naturally combine with what you already have. It’s really about letting people mix, match, and discover what works for them.”