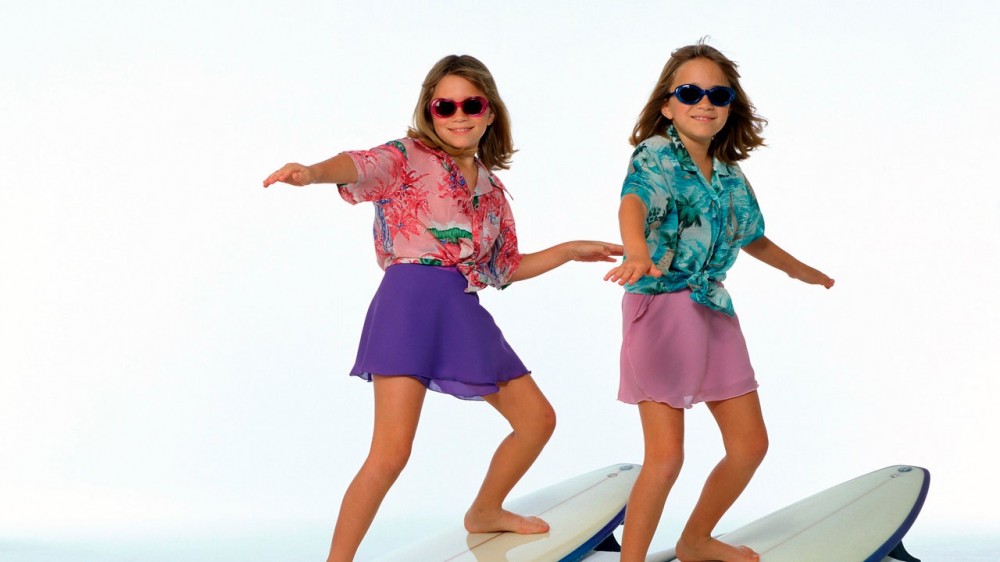 Mary-Kate and Ashley Olsen turned 35 yesterday (Gemini twin alert!), which is shocking since it feels like just yesterday that I was sitting cross-legged on my living room floor and watching them go on a series of increasingly luxe vacations in films like Holiday in the Sun, Passport to Paris, and When in Rome.

All of these movies are top-shelf, but to be honest, When in Rome wants what The Lizzie McGuire Movie has—even though it came out first!—and Passport to Paris? Kind of a snooze. The MK & Ash movie that I favor above all others is 2001’s Holiday in the Sun, which revolves around the twins heroically making peace with being taken on a trip to the Atlantis resort in the Bahamas by their parents instead of going to Hawaii with their friends.

The movie itself is full of romantic reversals, weird shots of dolphins, and a gorgeous and extremely important cameo from Megan Fox (who can forget the immortal line: “My name is Brianna Wallace, and I get what I want”?), but what really sticks with me, two decades later, is the style.

There’s been much discussion of aesthetics recently as many of us emerge from our pandemic cocoons and relearn the art of dressing. I’m of the opinion that those aesthetics should be aspirational, which is why, at the age of 27, I’ve introduced a steady diet of skorts, chokers, platform slides, and hair scarves into my wardrobe. Basically, I want to look like an Olsen twin on a parentally funded resort vacation in 2001, even if at the moment I’m not doing much besides buying iced coffee and going to parties for 20 minutes before getting overwhelmed and sprinting home.

The Olsen twins typified the “popular girl who’s actually kind of nice to you when her friends aren’t watching” look that I was so enamored of circa 2001, and I’m as surprised as anybody to find that that’s exactly the reemergence vibe I want to deliver. I want to look carefree, even if I’m not; I want to push my tiny pink-hued sunglasses up on my head when I come inside from a day at the beach; and most of all, I want that to emit that signature smell of sunscreen and flavored lip gloss and bug spray and Popsicle juice that truly means summer.

There are certainly aspects of the Olsen twins’ looks in Holiday in the Sun that I won’t be recreating; rarely have I found a tube top suitable for a larger bustline, let alone one covered in sequins, and I don’t think crimped hair necessarily needs a comeback. (I shudder to think of the damage I once did to my preteen locks with a curling iron, not to mention the hours I spent dividing all of my hair into tiny braids I would then sleep on and take out before homeroom for that perfect, just-crimped look.) Still, a rewatch of the film left me with the same Olsen-related longing I had as a tween, the urgent need to be witnessed looking chill as all hell. To PacSun we go!