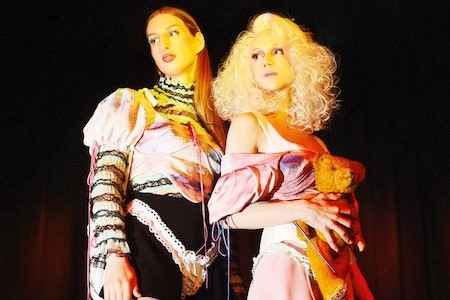 With the Hungarian LGBTQ+ community under attack by a far-right government, Fabian Kis-Juhasz’s

In 2020, 350 transgender people have been killed so far, making it the most dangerous year since records began. With persecution against the LGBTQ+ community and particularly trans people on the rise around the world, one country suffering is Hungary.

Earlier this year, its right-wing government passed laws which stopped trans people from legally transitioning within the country, before further legislation banning queer couples from adopting children was also brought in.

Entitled Audition, the zine spotlights a number of trans women living in Hungary, all of whom are dressed in Kis-Juhasz’ campy SS21 collection. Alongside the visuals, the zine explores the themes of performativity and femininity, and explains the dire situation in their country and the persecution they face on a day-to-day basis.

Besides spreading awareness of the crisis in Hungary, 100 per cent of profits from Audition will go directly to Transvanilla – an organisation supporting trans people in the region. Get yours here.