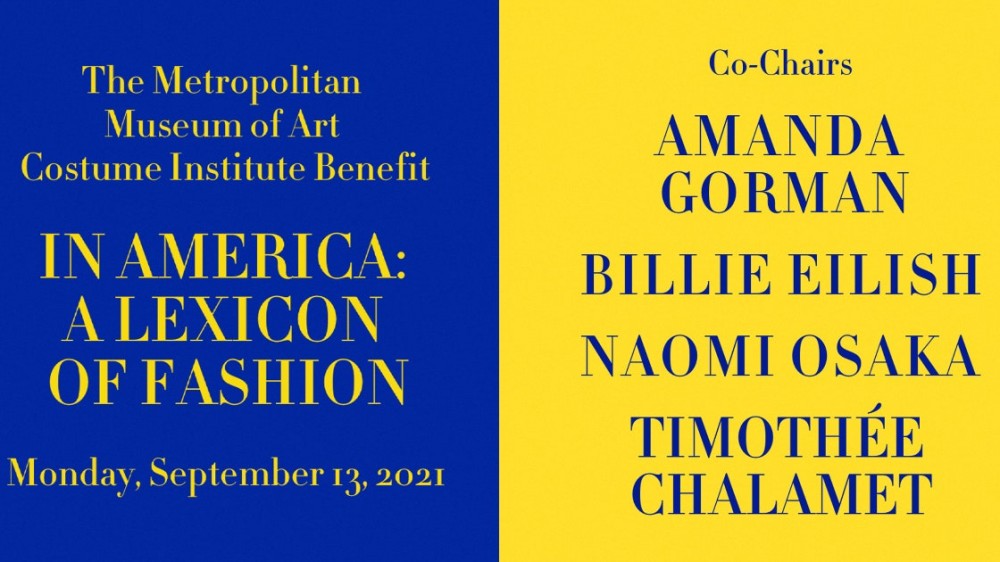 The Met Gala’s return after a year’s hiatus is cause for celebration. Part one of the Costume Institute’s exploration of the nation’s sartorial identity, “In America: A Lexicon of Fashion,” opens on September 18th and promises to be a deep dive into American ingenuity.  Everything from the luxe ease of Halston’s ’70s glamour to Rodarte’s ethereal edge and Kerby Jean-Raymond’s powerful political vision for Pyer Moss will feature within the forthcoming exhibition. Similarly, the night’s hosts also represent a cross-section of homegrown talent. Gen-Z superstars Timothée Chalamet, Billie Eilish, Naomi Osaka, and Amanda Gorman will serve as co-chairs, while Tom Ford, Adam Mosseri, and Anna Wintour comprise the evening’s honorary chairs.

They may be young, but each of the night’s co-hosts has made their mark on fashion. After breaking the leading man mold with his performance in Call Me By Your Name, Chalamet has become the most influential man in fashion. His unexpected mix of streetwear, lack of a stylist, and embrace of avant grade labels setting him apart from his peers. Likewise, Eilish’s willingness to embrace an aesthetic as innovative as her music has pushed emerging brands into the limelight and challenged old rules about how a pop star should dress.

Though she was born in Japan, tennis champ Osaka’s formative years were spent stateside, racking up titles and developing an irreverent sense of style. The striking, colorful pieces she favors on and off the court turned her into a designer muse and one of the best-dressed athletes around. Of the group, poet and Vogue cover star, Amanda Gorman is the latest to become a household name, but in her short time in the spotlight, she’s cultivated a look powerful enough to match her words.

Each of the Met’s four co-hosts embodies the defining factor of American style: individualism. They may approach the concept differently, but their shared passion for expressing themselves through clothing connects with the exhibition’s theme. Chalamet, Eilish, Osaka, and Gorman have all developed a distinct visual language for their public personas, one that is informed by the legacy of iconic fashion made in the U.S.A.