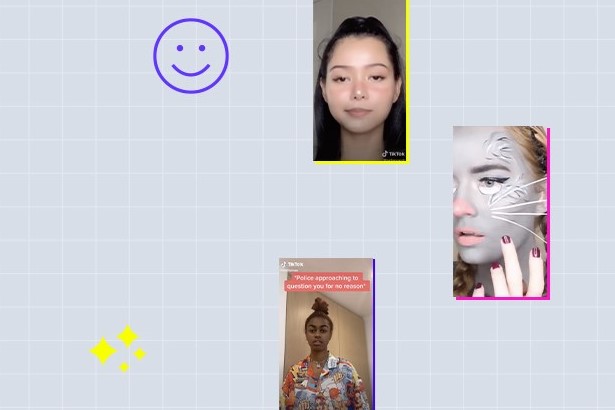 The many moods of 2020 through TikTok

In partnership with TikTok

In a year where a pandemic locked us all up in our houses without further notice, not much could have made it better. Our usual coping mechanisms disappeared overnight; trashy reality TV shows and movies were postponed, clubs ceased to exist and travelling abroad became a luxury afforded to the very few influencers sponsored to fly to Dubai.

Yet there was one unlikely hero that came to everyone’s rescue – TikTok. In 2020, there was only one winner and it was the app that got everyone hooked on badly choreographed dance routines and Dalgona coffee. The platform provided a digital space for all our needs and more. It became a space to let go, create and connect with people on the FYP who are the same type of weird as you.

But most of all, it helped us process the ups and downs of a difficult year. These are the many moods of 2020 through TikTok, according to users, creators, and experts:

For many, TikTok has become the ideal way to spend downtime and be distracted. “You don’t have to invest huge amounts of time to it like a film or TV show, but can dip in and out and be confronted with a wide range of snackable content, all of which is tailored to your interest,” says Chris Stokel-Walker, author of TikTok Boom. Chris has found joy watching videos of roast potatoes, “The best bit of TikTok I didn’t know I needed came as the weather started to change and the nights drew in. It was wholesome and brilliant and just what I wanted at that time.”

Opening up a portal to a parallel world, the Vine successor has created its own generation of celebrities like Charlie D’Amelio and Addison Rae who found their fame through catchy dance trends, popularised the concept of content houses, and is brimming with in-jokes that you’ll only get if you’ve spent enough time fiddling with the ghost filter. It’s also given us joyful gems like the skateboarding Fleetwood Mac guy and Bella Poarch head bopping to M to the B, a song written by a Blackpool grime MC.

Haaniyah, a 22-year-old filmmaker, says TikTok has been an escape from the news, “I couldn’t go online without seeing a death toll or new depressing information and it overwhelmed me a lot.” Amid all the global chaos, it’s been a genuine escape that has given many a semblance of normality. To describe it like a true Gen Z, it’s a place for “no brain cells, just vibes”.

TikTok is also no stranger to drama, with prominent influencers like Trisha Paytas and Tana Mongeau finding a new reason to fight with teenagers every single week. This year’s highlights also included baby witches threatening to hex the moon, teens conspiring to tank Trump rallies, and Charlie D’Amelio complaining about not having a hundred million followers.

But there’s drama and then there’s high drama. Only the TikTok community could start with a joke and have it morph into something else entirely by the following week. “My favourite mood has been high drama and that has a lot to do with the obsession the app has had with Ratatouille,” Haaniyah says. “From making the theme song a meme to making the film into an amateur musical, I love that.” It’s true, find another social media platform where someone would put in enough effort to make an entire Scooby Doo sequence with every character as James Charles, or create Chromatica II videos of the American election.

After waves of various protests this year, collective anger was a prominent feeling which TikTokers channeled through their videos. Lily Rose, a British TikToker with over a million followers feels like she has expressed this mood through her videos. “When the Black Lives Matter protests were happening, I was extremely angry and upset. Being a person of colour I knew and felt that I needed to speak up, but there was also a lot of pressure on me to speak up and I needed time to process everything,” she says. Lily’s videos about police brutality were widely shared across the platform, with many people supporting her message. She also participated in the platform’s Black History Month Campaign and for her it was a “great feeling to inspire and motivate others.” In 2020, TikTok has provided a space for young people to express their frustrations, connect with like-minded people and motivate others to make meaningful changes.

For lovers of spook, TikTok also went through a weird phase using the Randonautica app, where users travelled to randomly selected locations and made all sorts of creepy discoveries. There have been videos of ghosts caught on video and #WitchTok really took off, with recipes of spells and potions for every need.

On the other end of the spectrum, creators have been invoking fear with their dreadful cooking videos and ridiculous tutorials, *cough*, Five Minutes Crafts. Reactions to such videos have been hilarious to watch, with one TikToker’s disgust at a chicken and beef recipe making it on The Jimmy Fallon Show.

Quentin Ager, the TikToker behind the video, tells me that people are still messaging him about his reaction. “I find it hilarious that people still watch that video to this day,” he says, “I try my best to brighten someone’s day with a funny reaction to something.”

this just happened in aurora colorado. please do not go randonauting, you never know what you’re going to come across. #randonautica

With most schools and universities shut, the learning didn’t stop. #LearnOnTiktok videos have provided interesting educational content, teaching users unique skills, cool facts, and tricks. Sophia Smith Galer, is a journalist with a big following on TikTok, who has been teaching her followers different languages as well as sharing journalism tips on the platform.

The TikToker, awarded the “Voice of Change” badge, says she has grown organically by providing informative content. “It works because it’s micro-entertainment,” she says, explaining that the more engaging and bitesize something is, the more likely someone is to remember it.

“The niche communities and followings you develop mean that it’s not just you learning, it’s thousands learning and all sharing the same experience,” she continues. ”The comments sections under videos become the notes slid under desks in classrooms, or the hands raised up to the teacher – just all digital, globalised and beautiful.” Clearly, being locked down couldn’t stop our human desire to learn and be curious.

This year would have been impossible without the little wins and the small triumphs. How many TikTok videos have you seen of people doing extremely difficult but mundane things?

Whether someone’s trying to throw a piece of paper in the bin or bounce a ping pong ball on a flight of stairs so that it gets into a steel pan, this collective boredom was captured perfectly on the platform. “You can intelligibly understand why it’s hard and because it’s so visual, it makes it look really easy,” says Bernie Hogan, a senior research fellow at the University of Oxford’s sociology department. He thinks that because people were cooped at home, due to isolating or being on furlough, they had a lot of time on their hands. “They’re flipping bottles over and over to feel a sense of triumph by working at a really mundane thing you can do in your house.”

You ever be bored at the house bored?🔥🔥 #checkthisout #bored #fyp #foryou #xycba #rap #viral

It’s terrifying to realise that for many Gen Zs, the noughties are as ancient as the Medieval times. So watching them rediscover songs, films, and fashion from the era is very nostalgic. Y2K fashion is all the rave, with teens sporting bright pink bandanas, tiny sunglasses, and tiny bags. Disney Channel bangers have made a comeback with Aly and AJ’s “Potential Break Up Song” blowing up. And teens have loved recreating endings of noughties movies, as well as ripping apart the horrendous dancing and acting from films like Camp Rock. Also, RIP Debby Ryan’s entire career. Nostalgic videos on TikTok have been successful in reminding us of better times of yesteryear (and have made 25 year olds like me feel very old).