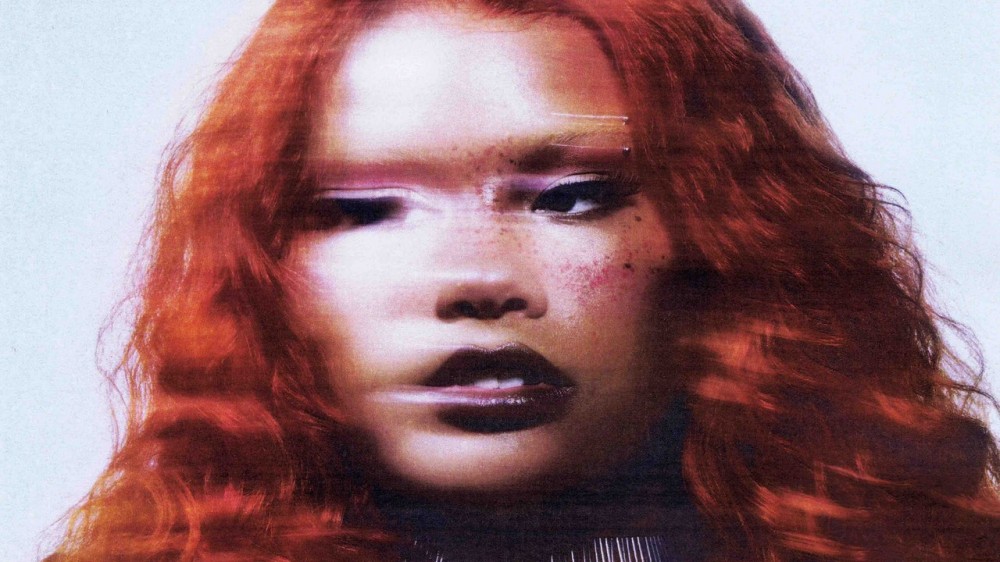 On the cover of Shygirl’s new EP, ALIAS, her eyes and lips poke through a taut, waxy membrane of flesh. Sitting somewhere between a David Cronenberg vision of body horror and the eerie carnality of an Eva Hesse latex sculpture, the musician’s features are ready to be twisted and turned into whoever the artist fancies becoming that day. That’s exactly what she intended.

“It kind of stemmed from the first lockdown, where it was just me and the music and it felt like a really introspective period, I guess,” Shygirl explains. “I just love that idea of taking the familiar features we associate with people—the eyes, the mouth—and warping that, pushing against this idea of how we identify a person by sight, and how we read people. Because I judge people when I look at them, and I know people have been doing that with me. I think it ended up being a bit more spooky than I initially anticipated, though,” she adds, laughing.

It turns out the “alias” Shy is referring to in the title is one of four alter egos—with Kardashian-esque flair, they’re named Baddie, Bovine, Bae, and Bonk—that she slips between across the course of ALIAS’s seven tracks. In the images accompanying this article, we see Bovine decked out in white-hot London label Charlotte Knowles, one of four designers she and creative director Mischa Notcutt turned to when figuring out how to costume each character. So who exactly is Bovine, underneath that fabulous shearling jacket and printed mesh two-piece? “Bovine is like this girl I remember reading about in books when I was a kid,” Shygirl explains. “A posh girl who thinks she's all that, and is the class bitch—quintessentially English, but with an ugly name. Bovine is that girl I used to read about in stories, and I hated her, but also kind of loved her, because she's the interesting one.”

For an artist like Shygirl, it makes a strange kind of sense. It’s her willingness to embrace a heady mix of genres that makes ALIAS so thrilling, as it drifts from the frantic UK garage beats of “TASTY,” to the itchy, glitchy videogame synths and grime-adjacent flow of “LENG,” to the four-to-the-floor thump and fizzy Europop whistles of “SIREN.” Her Instagram bio reads “LYRICALLY SEXXXY 24/7”, a claim her soft-spoken, nonchalant vocals more than live up to. “I'm a freak in the sheets, and I go the whole night / I hear they call me shy, I can only wonder why,” she hisses on one of the EP’s standout, “FREAK,” made with her regular collaborator, the similarly buzzy London producer Sega Bodega. And even as she firmly marks her own territory as an artist, it’s hard not to think about the rich seam of Black female musicians who have pushed against the boundaries of the genres expected of them—from Janet Jackson to Kelis to FKA Twigs—yet whose narratives have been forced to fit awkwardly into the confines of R&B, even while they moved between a wildly eclectic range of sonic palettes.

But with her various alter-egos and wilfully experimental sound, Shygirl is clearly ensuring she’s one step ahead of any attempts to box her in. “When I was considering bringing all these different sides of myself to the project and trying to explain it to myself, I was like, how can I be all these things at once?” she says of ALIAS. One way of expressing this came via a series of 3D avatars Shygirl created—coming to life as something between Bratz dolls and Y2K-era videogame characters—with the help of CG artist Sy Blake and animator Maurice Andresen. “There’s this weird thing when I’m using myself as the muse,” she adds. “There’s a sense of self-gratification that’s almost childlike, and making myself into a video game character is what I would have dreamed about doing as a kid. It was just a lot easier to try and personify those alter-egos, and I wanted to have a visual representation to help explain that. Because I do become those people, depending on what I decide to wear any given day.”

If there’s another thing Shygirl knows, it’s what to wear on any given day, as she herself puts it. It doesn’t take more than a cursory scroll through her Instagram feed to see that Shygirl is firmly embedded in the current crop of agenda-setting designers emerging from London, all of whom helped define the various characters on ALIAS. There’s her longstanding friendship with Mowalola Ogunlesi, whose designs outfitted Bonk; her love for ASAI’s signature “hot wok” mesh tops, here worn by Bae; and of course Bovine’s relationship with Charlotte Knowles, whose fall campaign she appeared in wearing one of the designer’s signature tattoo prints.

Finally, there’s a new fashion friendship with Casey Cadwallader at Mugler, forged earlier this year. “I knew Baddie would wear Mugler, and after ‘FREAK’ came out, Casey actually reached out to me,” Shygirl says. “I thought that was a really lovely interaction of him inspiring me in terms of telling this character’s story, and then Casey telling me he was inspired by what I did.” Not only does Baddie wear Mugler in the album’s promo shots and on her avatar, but Shygirl debuted an unreleased track as part of the brand’s spring 2021 digital runway show, released during Paris Fashion Week in October.

Aside from the high fashion co-signs, however, clothes are just another weapon in Shygirl’s arsenal to deploy in her ongoing self-discovery as an artist, a journey she speaks candidly about. It’s something that’s finally approaching full fruition on ALIAS. “It’s not a costume, you know, it's fashion,” Shygirl notes. Somehow, by hopping wildly across genres, the end product, both sonically and in terms of style, feels unmistakably Shygirl—a more impressive feat than it might initially seem for a musician only her second EP.

“I think everyone is on the same journey that I am,” she continues. “I'm still discovering what I'm about, and the more music I make, the more I realize which stories settle nicely together. It just felt right when I finished, that it was what I wanted to be saying right now and represented where I'm at. And if I enjoy it, it’d be nice to know if other people have had the same enjoyment from it as I do. I’ve always thought of myself as limitless. I didn’t really expect to be making music, and I feel like I’m still in that discovery phase. Hopefully, that discovery phase never ends.”