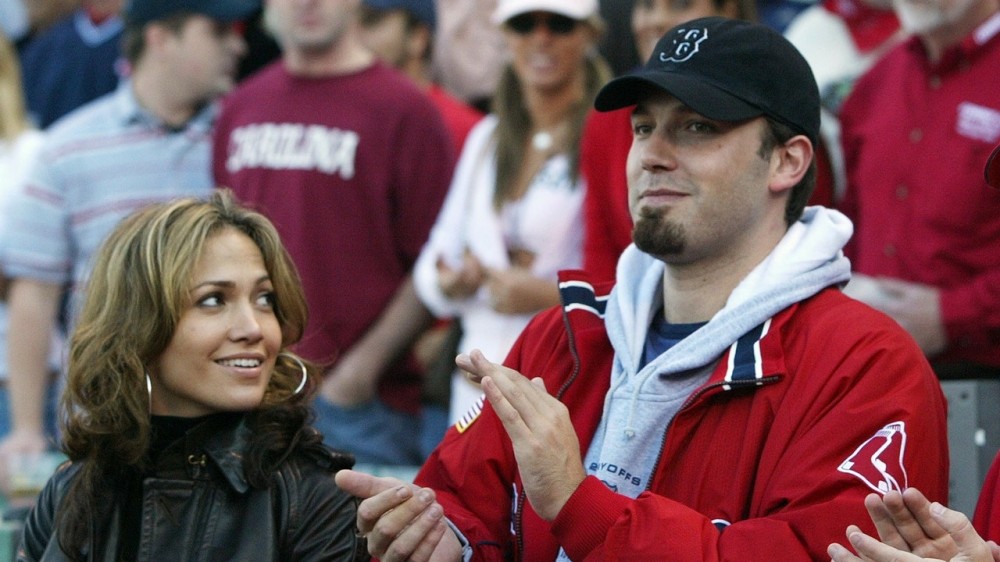 Just yesterday, an image circulated around the web of Jennifer Lopez and Ben Affleck leaving Lopez’s home in Los Angeles. J.Lo was fresh-faced and beaming in a frilly white tank, while Affleck was buff, bearded, and wearing a boring gray T-shirt. The image brings me back to the 2002 music video “Jenny From the Block,” when the duo was first coupled up. Ben makes a cameo through a voyeuristically shot montage—an allegory for their much-publicized relationship—doing things like pumping gas or driving a car. My favorite moment is when they are on a yacht and Lopez is in a barely-there hot pink bikini and Affleck is lying next to her in a white ribbed tank, probably the type that you get in a pack of five from Marshalls, with his bicep tattoos on full display. He plops a kiss right on her butt cheek.

The image was prime Bennifer. Like many, I’m fascinated that the duo is back and as friendly as ever. This is after a called-off engagement and Lopez trying to get “Jenny From the Block” nixed from the internet. Drama aside, part of my fascination has to do with the contrast between Lopez’s high glamour and Affleck’s lazy look from their relationship in the early 2000s. He’s always just been a dude from Boston who’d rather accessorize with a perspiring iced coffee from Dunkin’ Donuts than whatever Prada is selling to peacocking bros.

The juxtaposition of Lopez’s opulent style and Affleck’s c’est la vie outlook is best seen at sports games in the early 2000s. At a Lakers game back in 2003, Affleck wore a T-shirt of communist revolutionary Che Guevara on top of a white long-sleeve shirt with Men’s Wearhouse–style chinos and a watch that was supposedly gifted to him by Lopez. Ms. Jenny is impeccably dressed in a striped polo blouse with a plunging neckline, white jeans, wooden wedges, and those signature hoops. Later that year, Lopez went to Affleck’s hometown of Boston to watch a Red Sox game, sporting a head of waterfall waves, a leather jacket, a turtleneck, and her signature pair of hoops. Affleck looks like any decent-looking dude plucked from a Southie bar in full Red Sox garb with a soul patch akin to a Rorschach inkblot. It’s beauty and the Ben.

And yet, I’m a sucker for Affleck’s lack of definable style. To me, there’s something attractive about a successful guy who either really goes for a look with a point of view, like Carlos Santana, or who can’t be bothered, like Affleck. Both men are so extreme with their style choices (or lack thereof) that I’m confident neither of them frets about what they are going to wear. I’d rather have a guy grab me a sweating iced coffee than be stuck preening himself in the morning.

What can we expect from the 2021 edition of Bennifer? More of the same. Lopez will carry the style leg of the relationship with her zillion-dollar outfits per usual, and Affleck is going to be hitting up the drive-through of Dunkin’ in whatever he was wearing, as he always has been. Feels like yesterday—and it still looks great.