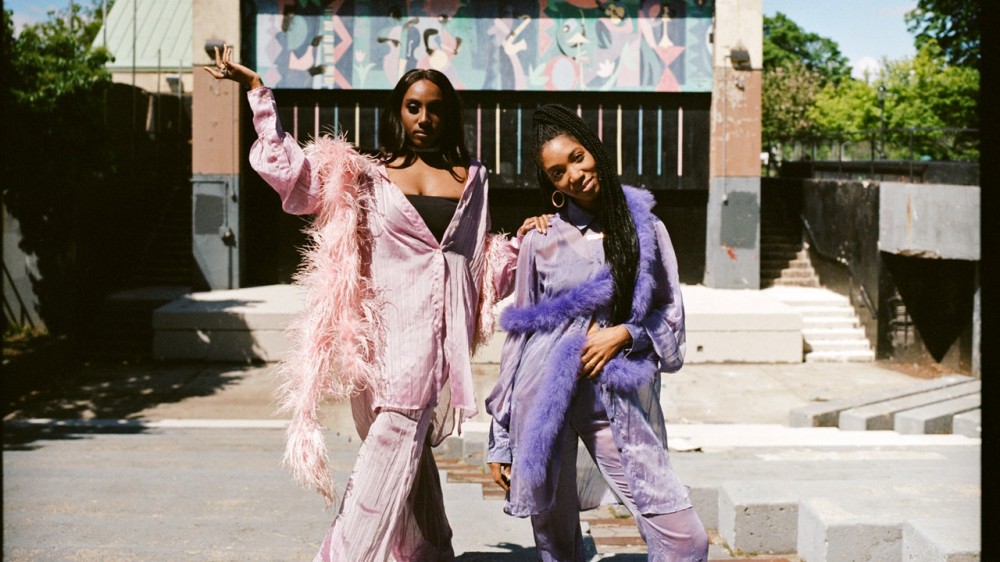 Comedian Ziwe Fumudoh is destined to be a household name. That much is clear on her new show, simply titled Ziwe and brought to you by A24 and Showtime. Both campy and elegant, the talk show packs a punch with its layered commentary on race and ample wit. But the look is bigger and brighter than what you expect from late night or daytime. In a cabaret-style musical skit, Ziwe sings, “Lisa called the cops on Black people, even just for taking a stroll,” grooving in a LaQuan Smith black catsuit with sheer panels streaming up the thighs. It’s all delightfully extra.

The show’s clothes are made to look larger than life. “The intention was to create looks that aided Ziwe in the permission that she’s given herself to take up as much space as she wants,” says her stylist, Pamela Shepard-Hill. “That’s the point.” The clothes—a flapper-style, rhinestone minidress, a blush pink tube dress with opera gloves, and a slinky fuchsia slip paired with a fur coat—draw the viewer in visually and then lead them into a comedy-glazed but ultimately deep discussion about race. “Much of this show is serious conversations rooted in comedy,” says Shepard-Hill. “I think that these looks are the beginning of the smile.”

Ziwe’s show was born out of the Instagram Live sessions she began during the pandemic, where she became well-known for interviewing white feminists like Alyssa Milano and Rose McGowan. Her bold look was established early on. She’d wear a cow-print corset, a striped top, and a fat furry black hat or an Adidas tube top with shiny pleather gloves to ask people like internet personality Caroline Calloway if she had ever actually read White Fragility. (To her Vogue shoot, Ziwe wore the same tube top she wore while interviewing Calloway—a conversation that went viral.) Watch enough of Ziwe, and you’ll pick up on some motifs. In episodes of her show, we see her in a tube dress with marabou-trimmed opera gloves. “I loved the operatic gloves. That was a recurring theme for me as well,” Ziwe says. “How do you make it feminine while still feeling kind of forward?”

Despite her tomboy phase while growing up in Lawrence, Massachusetts, Ziwe has long embraced her feminine personal style. Her inspirations are Black icons like Brandy in Moesha and later Cinderella, as well as Naomi Campbell. “That was the first time I really saw a dark-skinned Black girl dominate in fashion,” says Ziwe. She was also particularly influenced by Dionne’s funky look in Clueless. “That was really radical for me. Just the fuzzy hats, the feathers on the cuffs, fur cuffs, the plaid schoolgirl outfits that are both really girly but also kind of hot and sensual.” Currently, Ziwe swears by Emma Brewin’s large hats, which she has a rotation of.

Shepard-Hill and Ziwe met back in 2017 when Ziwe was a writer for The Rundown With Robin Thede and Shepard-Hill was styling for the show. Shepard-Hill hadn’t always been into fashion. She grew up in Maryland in a science family and would look at a JCPenney catalog with the excitement of a kid on Christmas. Eventually, she attended Spelman College in Atlanta, where she studied computer science and math. Shortly after graduating, she had a car accident which made her rethink her career path. “That was the moment where I was just so clear. Time is a gift. It’s precious,” she says. “If there’s something that you’d want to do, that you’re curious about, you need to get busy.”

Ziwe and Shepard-Hill had kept in touch after they had worked together. “She is someone who has really great energy, really collaborative, a great listener,” says Ziwe of Shepard-Hill. “The merging of my film and television and pop-culture and music knowledge mixed with her fashion repertoire, it’s a really good symbiosis and the intersection of what our show is doing.” For the show, Shepard-Hill was tasked with bringing her aesthetic from a visually limited Instagram Live to the big screen. “How can I give the full idea around those snippets? What is the more expanded version with a wider frame, giving the opportunity to grow with these looks?” says Shepard-Hill. The hyperfeminine style was amplified for the big screen: Ziwe may have worn a black furry hat on IG Live, but on the show she’ll wear a massive fur coat. The mood board is expansive, with both women pulling from their respective icons. Ziwe cites Rihanna, Clueless, and Daria as inspirations, while Shepard-Hill references Rico Nasty, Diana Ross, Kimora Lee Simmons, Naomi Campbell, Donyale Luna, and Saweetie. “I feel like Ziwe’s world was in her head before we’ve experienced it. You have to be a solid communicator to get what’s up here out here,” she says. “That’s not a small feat at all.”

The high-octane glam would be nothing without Ziwe, who exudes a hypnotic energy that makes you laugh and think in equal measure. The mix is fantastic and sharp. It takes a certain person to fill these seen-and-be-heard clothes, and that’s Ziwe. “I think what’s so awesome in Ziwe’s fearlessness is that it’s such a great vehicle to push that feeling of elevation,” says Shepard-Hill. “You have to have confidence, you have to have bravado, you have to have a presence, you have to have a will to really just own it. She’s done that beautifully.”