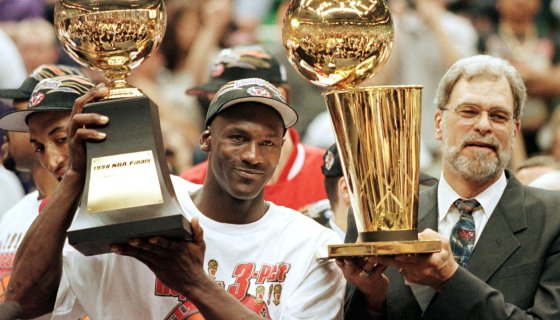 Sunday evening (May 17) saw the conclusion of ESPN’s 10-part Michael Jordan documentary series, , and it ended as strong as it started. In episodes nine and 10, the infamous flu game, the assassination of Steve Kerr’s dad, and more were covered in detail.

Episode nine puts an especially revealing focus on the difficulties the Chicago Bulls faced in capturing their fifth and sixth titles. Jordan’s fifth ring proved to be a challenge to capture as his squad faced up against John Stockton, Karl Malone and the Utah Jazz for the 1997 NBA Finals. Right before game five, Jordan became sick and it was long speculated that he was suffering from flu-like symptoms and thus the legend grew.

However, Jordan finally revealed that the culprit was food poisoning, and not a rumored late-night binge of drinking and partying, nerves, or any of the myriad number of theories that jumped around at the time. Jordan left that game with 38, seven rebounds, and five assists and added three steals to boot.

The episode was also the Steve Kerr show, showing how important a cog he was in the Bulls offense despite being seen as nothing but a role player. It also showed how Jazz star Bryon Russell ended up on Jordan’s list of players he used to fuel his game. It was apparent that during the final two series of the Bulls’ second three-peat that Father Time was catching up to Jordan but he was still an elite player who used his smarts versus his fading physical gifts.

Another interesting sidebar in the episode was the revelation that Kerr’s father was assassinated in 1984 while working as a university president in Beirut. Although Kerr and Jordan both lost their fathers to violence, the pair didn’t speak much about this aspect of their lives due to the emotional rawness of the events. Viewers also got to learn more about security guard Gus Lett, who became a father figure for Jordan after his father’s passing.

In episode 10, much of the mystique of Jordan had been laid out in fine, time-hopping detail to this point. Profane, honest, and sometimes somber, the documentary might have missed some prime opportunity to hear more from Jordan’s opponents over the years, namely the aforementioned Malone and Russell although Stockton briefly appeared. It was noted that the 1997 and 1998 NBA Finals showed the Bulls facing off against the Jazz and defeating them both times to the tune of four games to two.

And yes, that poetic ending en route to the Bulls’ sixth ring came at the expense of Russell’s ankles and ended all speculation that Jordan pushed off to hit the game-winning shot. Leonardo DiCaprio also made a cameo in the doc and it was shown that Jordan and the team were fans of his films with the actor getting to personally congratulate his Airness. Another high point of the documentary was Dennis Rodman’s professional wrestling exploits and how he made a boatload of money at the expense of being fined for not making appearances.

On Twitter, fans of The Last Dance shared their favorite memories and moments, and we’ve got those listed below.

Grab some popcorn and get your binge on 🍿

“Why would I think about missing a shot I haven’t taken yet?” -MJ

Look at those final scores compared to now…84-82? When was the last time both teams scored under 90pts in a game?

Damn Karl went on they bus to co granulate them. He one of the real ones

A Last Dance watch party with MJ & @NBATVAhmad sounds like it’s too much fun pic.twitter.com/WBa1Uv7lfJ

I had no idea how MJ stayed true to his country ass roots before this doc. Dude was always super polished on the mic but in the locker room he was a sentient neckbone.

The only way to stop MJ fans now 😂pic.twitter.com/vP3rdYnLMn

Every angle of the shot is just gorgeous #TheLastDance pic.twitter.com/YCdQTkkCv3

MJ scores half the points while the second best player is hurt all game, on the road, in a close out game goes and gets the final steal, and winning shot……will never see another #payhomage

the Utah Jazz said they were waiting the entire year for their rematch with the Bulls and this was Rodman's response pic.twitter.com/YPXFQp4Gte

Rodman went AWOL on MJ and the 90s Bulls bc he had to go join the nWo. If you're not a certain age I don't think you can really wrap your head around how that's the coolest sentence you could've possibly put together in 1998.

Has anyone seen Utah Jazz fans and re-open the country protestors in the same room? 🤔

this is the nicest way to say "good game" to Michael Jordan pic.twitter.com/zio0ARVr5H