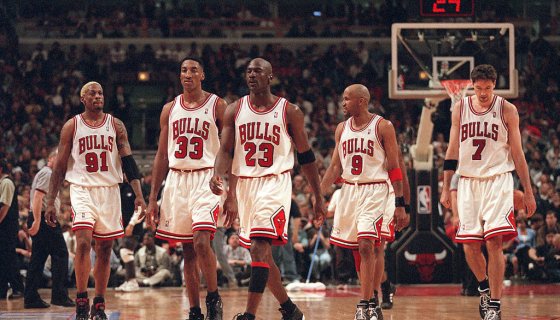 With many stuck inside their homes along with the absence of sporting events, the Michael Jordan ESPN docuseries has been must-watch television. In episodes three and four which aired Sunday (April 26), the rise of Dennis Rodman and the Chicago Bulls’ rivalry with the Detroit Pistons were highlighted.

Rodman’s story arc is displayed most prominently in episode three of The Last Dance, highlighting his unlikely rise in becoming one of the world’s most elite basketball players. Like Scottie Pippen, Rodman grew up poor but ended up playing at a Division II college but managed to play at a level that caught the attention of the Pistons, who drafted him in the second round.

With Detroit, Rodman won the first two of his championship rings in 1989 and 1990, but it was his time in Chicago that naturally had the most light. Rodman’s eccentric personality and withdrawn nature came out in other ways, typically his strong play, and of course his zany haircuts.

In one portion of episode three, Coach Phil Jackson alarmingly grants Rodman a vacation break mid-season to Las Vegas, with Jordan expressing his shock at the request in an interview clip that was used to tease the episode.

The episode also focuses on Pippen’s frustration with GM Jerry Krause over his salary and resigning himself to continue playing for the team despite its unwillingness to negotiate new terms.

Episode four dives into the Bulls-Piston rivalry, notably how Detroit vanquished Chicago by bullying Michael Jordan. Jordan expressed still-visible disdain for the team, and not forgiving Isiah Thomas and the team for refusing to shake hands after the Bulls swept the Pistons in the 1991 NBA Eastern Conference Finals. Thomas was allowed onscreen to explain what happened that day, but Jordan wasn’t hearing any of it.

“I know it’s all [B.S.],” Jordan said. “Whatever [Thomas] says now, it wasn’t his true actions then. He’s had time enough to think about it, or the reaction of the public has changed his perspective. You can show me anything you want. There’s no way you can convince me he wasn’t an a**hole.”

With the two episodes in the can and six more to go, fans on Twitter have chimed in with their reactions. We’ve got those listed out below. Check out The Fumble’s recap of The Last Dance episodes three and four below as well.

Someone said this is Dennis Rodman and Carmen Electra in Vegas 😂😂 #TheLastDance pic.twitter.com/z8wNj0ej3n

Man #TheLastDance had me so motivated last night—I got up as soon as it went off and started working out. It’s nothing like being inspired by someone else greatness!

What cracked me up most about Dennis Rodman disappearing in Vegas for multiple days during the 1998 season as detailed in Episode 4 is — later in the season, Rodman skipped a practice during the NBA Finals to appear on WCW alongside Hollywood Hogan and the NWO. 😂 #TheLastDance pic.twitter.com/FnbxrB3Tn6

My favourite bit of #TheLastDance so far. Dennis Rodman going on holiday to Vegas in the middle of a season pic.twitter.com/Bomo7Mdps2

Dennis Rodman showing how much he understood and studied timing of rebounding was my favorite part. #TheLastDance pic.twitter.com/RuSoBuAT7J

Phil Jackson: There’s not an “I” in team.