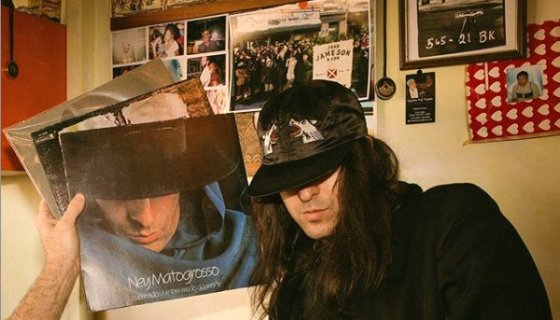 A note from the writer: Beauty and the Beat is my favorite piece of music ever created. That isn’t to say there aren’t more significant works or artists, but as a complete body of work, Edan made something that connected with me almost immediately and still stirs my soul today. I had the pleasure of meeting him through my friend Dillon and the late Paten Locke in Atlanta at where I got to tell him what Beauty and the Beat meant to me. He looked at me skeptically, but I earnestly tried to convey to him what place this album holds in my life. He was, as his nickname, humble and magnificent.

Edan Portnoy may very well be Rockville, Md.’s greatest MC. That’s said in slight jest of course but in reality, the producer, rapper, and DJ long ago eclipsed his days of being an indie darling and largely outside of the public eye, but not before delivering an opus that remains timeless. To understand the sonic leap Edan made as an artist on his second album, Beauty and the Beat, we take a look back at his debut album, the dusty and distinctive Primitive Plus.

In 2002, Hip-Hop found itself as a strange turning point with labels such as El-P’s Definitive Jux owning the underground and keeping the somewhat surging Anticon label at bay, while Loud Records continued its mid-major run. Debut albums from future legends such as Jean Grae and Royce Da 5’9 were among the offerings, and Roc-A-Fella Records still churned out the product for most points north while Rap-A-Lot Records, along with Cash Money Records, took care of the south. It was a time of transition and the shift to digital consumption of music was dawning.

Primitive Plus was a shock to the system in some ways. The album was indeed a callback to the 1980s and early 1990s; Edan rapped like a man much larger than his slim stature and commanded his rhymes with dexterity and confidence. It was traditional boom-bap in the best of terms, and lyrically it never got further than “rapping about rapping” that plagued many independent acts of the time. However, Edan’s perspective was fresh as it was clear that his vision was to both pay homage and carve a specialized niche for himself.

For all of the hazy snap, crackle and pop of his debut, Beauty and the Beat had a weighty promise of being something more. A chance meeting after a show in Baltimore back in 2004, Edan informed the writer of this piece that his next project was going to be rock-influenced but made specifically for music lovers. Rock and Rap have had fusions before but it felt as if that ship sailed along with Run-D.M.C.’s heydays. But in March 2005, the unexpected brilliance of Edan’s second album was anything but the loud, raucous frat-rap some may have been expecting.

To explain any further what Beauty and the Beat stylistically achieves would ruin it for any new listeners so we’ll avoid that here. We carefully suggest that the best way to approach this record is sober, clear-eyed, surrounded in sound and to let the album run through its 34-minute playing time. There is a thorough Hip-Hop lesson, screeching guitar riffs, and trippy sound effects that are all present. And because you will miss all the nuances in even the most focused of listening sessions, repeat plays will be necessary. The critics make the smart nod towards the album’s psychedelic, rock-tinged sound but the bombast of Golden Era Hip-Hop also rings true.

These days, Edan can be found in his adopted home of New York City spinning rarities at various bars, and his embrace of social media has allowed insight on his current activities. He still raps from time to time but appears to be content as a sparingly-used feature artist and producer, most evidently on the excellent EP with the gifted Homeboy Sandman and their Humble Pi project.

Much love to each and every one of you. Let’s try and transmute these unresolved emotions into excellence!

To use Edan’s preferred spelling, a “rapp” follow-up to Beauty and the Beat was teased but never materialized. Instead, the out-there mixtape Echo Party was released in 2009 with a warm reception despite the lack of new verses. Somehow, the world continued to spin without Edan giving us more and perhaps he said all he needed to. In many ways, this would make for a satisfying conclusion because few albums across any genre managed to retain its magic as well as Beauty and the Beat has over the past decade.

To experience Beauty and the Beat, check out the streams below.