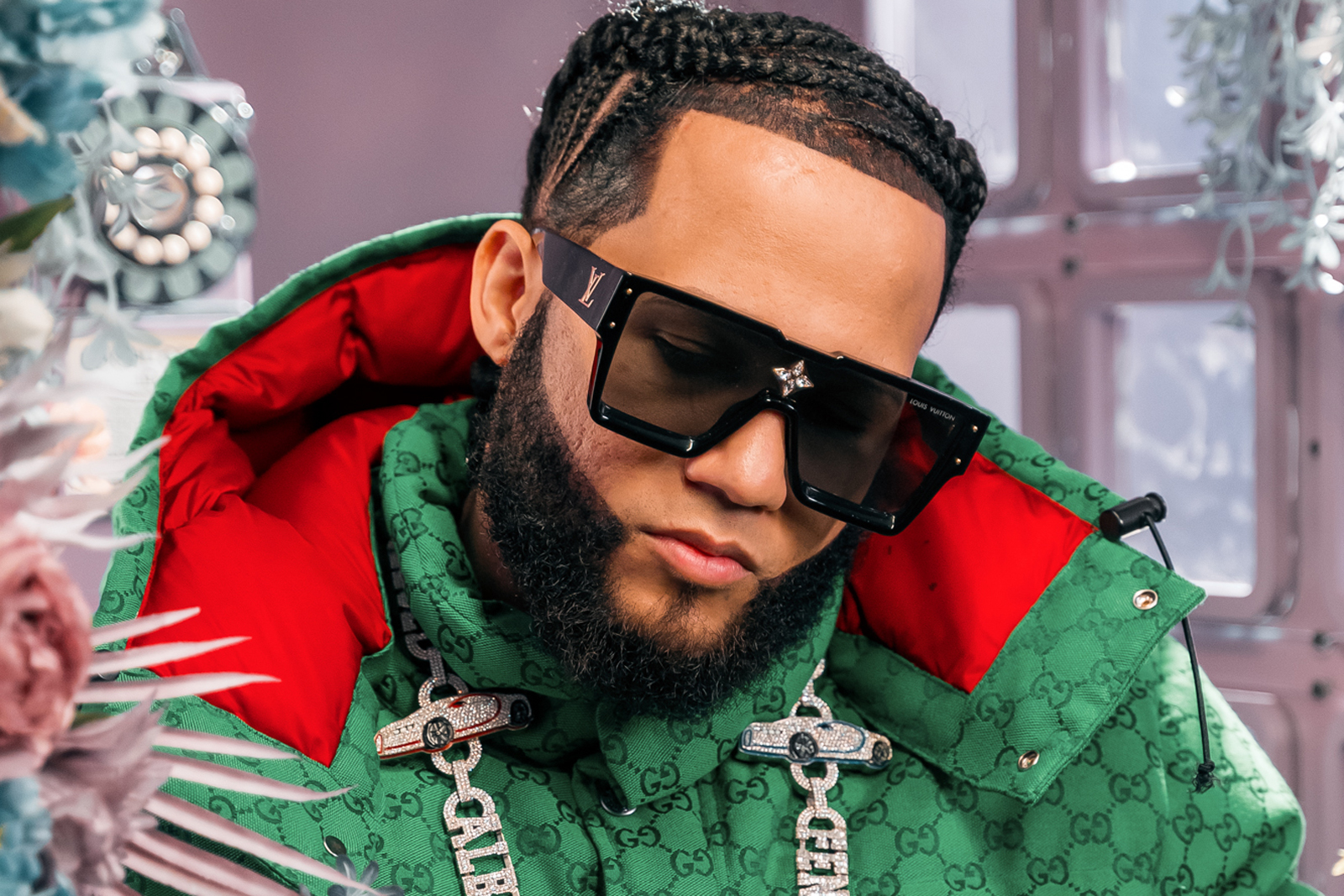 If there’s one person who represents the global force that Dominican dembow has become, it’s El Alfa. The artist, whose real name is Enmanuel Herrera, has been on the scene for 14 years, becoming one of the genre’s leading figures. He’s become a go-to collaborator for stars such as Bad Bunny, Farruko, and Nicky Jam, who have tapped him to get authentic dembow sounds, and across the industry, he’s recognized and respected as a pioneer who’s helped build a red-hot sound from the ground up.

At this precise moment, though, he’s just a dad, sitting in his house in the Dominican Republic. He’s in the middle of talking to Nuevo Culture over Zoom, when a little voice calls out in Spanish, “Who are you talking to?” In a flash, his five-year-old son, also named Enmanuel, darts out and jumps onto his lap. El Alfa breaks into a smile and tries to negotiate, asking the beaming child to give him a second to finish the interview. Little Enmanuel, instead, settles in and makes himself comfortable. El Alfa laughs and decides to keep going with his son by his side.

'Silence of the Lambs': The Complete Buffalo Bill Story

The 30 Sexiest Music Videos of All Time

El Alfa is especially at ease because he’s just released his fourth album, Sabiduria, a testament to the global reach of the genre he’s stood behind all these years. “I love everything about this album,” he says proudly. “I went out on Saturday, and I was listening to music in my car. I spent three hours on just one song, on ‘Gogo Dance.’ The next day, I put on ‘Bendecido,’ and I was like, ‘This is the one I love.’ It changes every day. What I take away from that is the album is good.”

Your newest album is called Sabiduria. How does it reflect the lessons you’ve learned in your career so far?
All of my albums have names that are deeply personal. I think of them as jewels I’ve produced with a team that reflects a culture that, at this very moment, is reaching people’s hearts across the world. My career has always been personal, so that’s why Sabiduria is such an important title. My first album is called Disciplina, which was when I discovered that with discipline, you can achieve more than with just talent. The second was called El Hombre, something that people very close to me call me and that had become a hashtag associated with me. My last album was called El Androide, because I thought of myself as a machine, always working, who doesn’t miss a minute when it comes to my career. I had gone like three days without sleeping, and I said, “I’m calling this ‘android,’ because I feel like I’m filled with cables.”

I named this one Sabiduria [Wisdom] because it’s the thing that has kept me in this position: It’s my way of thinking, of organizing all of my singles, of behaving in this industry. When an artist rises through the ranks in this industry, he needs to be more careful and protect himself, to go out less, and keep applying all the skills and lessons he’s learned into his work. I wanted to highlight that on this album.

Both in the Dominican Republic and across the music industry, people refer to you as the leading figure and pioneer of this genre. How do you see your position in dembow?
At a global level, people have said, “Wow, this guy is the person in charge of all this, he’s the leader of a genre.” But I don’t see it that way because I’ve been doing this for 14 years. I don’t think that way. It’s rewarding that people notice my work and that I’m one of their first references, but I don’t assume that position myself. I think when I look at myself and say “I’m the leader of a genre,” I’m going to want to think I’ve made it, and I’m going to sit down and take a break. I don’t want that yet.

Many dembow artists have been playing huge sold-out shows in the U.S.: You were at Madison Square Garden last October, Chimbala led a major dembow festival in New York City in March, Tokischa sold out Terminal 5. How does it feel to see how far the genre has come?
We’re coming from a pandemic and all of these changes in our world, so people are connecting to dembow, to that speed, to that vibe. Dembow music is a different kind of heat, and the hook comes when people start asking, “What’s that guy saying in that song there?” They start laughing and enjoying what we’re doing, and it becomes like a musical vice. I’ll give you an example: Two or three years ago, our Venezuelan brothers started emigrating to DR, where we’ve given them unconditional love. But our music and cultures are different. “That’s so fast, why is it so sudden?” But they started to listen to it, and now we have Venezuelans here who listen to more dembow than Dominicans. That’s why I always say that when you go into this world, you don’t leave it. There’s so much rapping and danceable rhythms, so people listen to it all the time, at parties, at the gym. I compare dembow to techno a lot; it’s like that electronic music vibe.

One thing that stands out about dembow is how it’s driven by storytelling. The lyrics are often reflecting some reality about life in the Dominican Republic, a lot of times in an original or humorous way.
It’s a very jocular style of music. I try to celebrate that on songs like “4K,” which is a global hit, or “Fulanito,” a song with Becky [G]. A lot of them are driven from storytelling, and it’s something I love, like on “La Mamá de la Mamá.” In the Dominican Republic, we’re experts at the double entendre. When you listen to it, people who don’t know a lot about how Dominican express themselves listen and then they keep discovering things more and more, more meanings in the song. I think this is why dembow is a genre that people go back to organically, not because a streaming platform is recommending it or an algorithm. The fans are going in and searching for our names directly.

Sonically, what did you want to achieve on Sabiduria?
I’m the arranger of my songs. The main producer is Chael Produciendo, but I think of myself as taking a very detailed role on all of my productions. I come up with these ideas and I know what I like. From the start, the first song that hits you on this album has a mariachi influence happening. Then you have reggaeton, sandungueo Dominicano, a song with French Montana, guaracha, dembow. I spent weeks just going to the studio and only composing for days straight, and even the day before I sent it in. People are always like, “Man! My God, how do you turn this in right at the end?” I turned this one about 48 hours before it came out. To get people to listen to it organically, I feel like there’s something strong behind what we’re doing.

There are also tons of collaborations on here, including one with French Montana and Lil Pump. How did those happen?
There’s nothing harder than trying to collaborate with Americans. But American artists have gone crazy over El Alfa’s music, and I’m a fan of theirs. When I meet Tyga, it’s crazy to me that he’s like, “I love El Alfa! I put your music on and people go wild.” I go, “Wow.” These artists are like, “We put your music on when we’re partying in L.A. and everyone goes crazy.” And it was like that when I met French Montana, he was like “Play me something from your new album.” And then he’s like, “Open the track up, because I want to be on it.” And 40 seconds into the song, he’s like, “Hit record,” and he jumped on it immediately. That’s not something you can achieve with money, with music campaigns. That’s an artist enjoying your music and your way of being.

Artists around the world are experimenting with dembow. How do you feel seeing that, and where do you think dembow is going next?
Whoever doesn’t adapt to this sound is going to get left behind. This is something people in Europe are doing, it’s number one everywhere. I don’t want to say dembow is at the very top yet, because it can still get bigger. I’m seeing the whole world get behind it and it brings me happiness, but I’m not the one that’s going to beat his chest and say, “I did this, I did that.” My joy is when someone else says it.

But this is coming on strong. Kids who are eight years old want to be dembow artists. When I started out, my family didn’t understand what I was doing. I was like 15, 16 when I recorded my first song, but there wasn’t a future. You didn’t see any dembow artists with a car, doing anything, 14 years back. But now, it’s different. People are going, “So and so bought the nicest house in the Dominican Republic, so and so is at the biggest awards ceremony of the year.” This has become a business. The future is going to be even bigger, because so many young people are coming up in this. A genre starts getting weaker when young people aren’t getting behind it. I can’t look back because if I do, there’s thousands of artists coming behind me. [Laughs.]