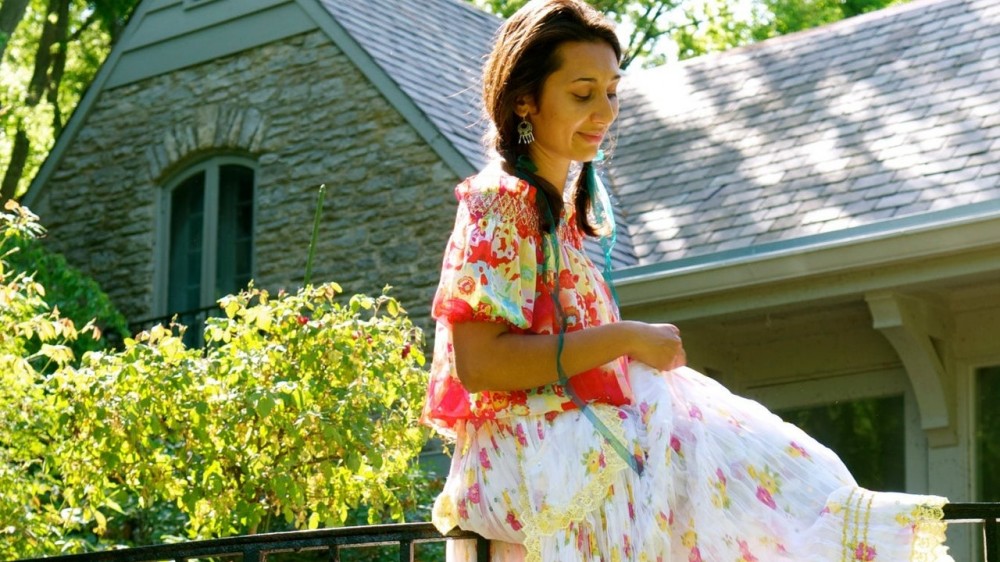 In a country known for its color and flair, the Banjara people of northwest India stand out for their lush embroidery, long skirts embellished with mirrors and mother of pearl buttons, and heavy silver jewelry hanging from their wrists, their hair, ears, and noses. Banjara means traveler or wanderer, and about 1,500 years ago, some left India and migrated west, eventually making it to Europe. To this day, their descendants, who you might know as “Gypsies,” share with the Banjara a love of long, colorful skirts, head coverings, and piles of flashy jewelry. In fact, the nomadic Banjara are often called “the Gypsies of India.”

The Indian-American designer Viji Reddy employs Banjara artisans to hand-embroider many of the products for her artisan home collection, Alamwar, which is sold in dozens of high-end boutiques everywhere from the Hamptons to San Francisco. An avid traveler herself, when she was planning the launch of her new fashion line, she decided to call it Gypsy Soul. “I thought just like everyone else, it’s a cool word,” she says.

Full of excitement over her artisans’ connection to modern Gypsies, she shared this story with the Romanian-American founder of Blue Heron Foundation, Stefania Magidson, at a conference in India. Magidson gently suggested she meet with the expert Cristiana Grigore.

Grigore’s nationality is Romanian, but her ethnicity is Roma, which is the preferred term for what many people call Gypsies. She’s also the founder of the Roma People's Project at Columbia University, which aims to destigmatize Roma representation and promote new, uplifting narratives about their identity. As part of that mission, she campaigns to make the word “Gypsy” obsolete.

That’s because in Europe especially, “Gypsy” is a slur, often associated with petty thievery and squalor. For at least a millennium, the Roma have picked up and moved not for entertainment, but to survive. They’ve been imprisoned in Spain and enslaved in Romania. An estimated half million were exterminated by the Nazis, and the communist regimes that followed attempted to stamp out their language and culture. Name a European country, and you’ll likely find historical and current violence and state-sanctioned discrimination against the Roma. They experience police brutality, and have had their houses burned (recently!) by angry mobs.

Grigore has experienced this stigma herself as a girl growing up in Romania. “I was afraid to be seen with other Roma, because I felt ashamed,” she told me in 2019 over tea at a café on the Upper West Side of Manhattan. “My father never came around school. He was afraid that he would cause me trouble because he's darker [than my mother].”

That historical trauma has followed the Romani to the United States. There are an estimated one million Roma living here, but fearful of discrimination, they keep a low profile. It’s not unjustified. In the 1950s, Roma children in Brooklyn were taken from their parents for Catholic re-education, and as recently as 2018, friction between recent Roma refugees and the conservative residents of a small town outside of Pittsburgh provided fodder for one of Tucker Carlson’s racist diatribes at Fox News.

As a Fulbright Scholar, Grigore still suffers ridicule from people who should know better. At a reception in Washington D.C., a diplomat said to her, “Oh, Roma are getting educated, huh?”

Fashion’s love affair with the Gypsy lifestyle goes back decades, and it hasn’t always been glamorous. A 1967 Look Magazine photoshoot shows Italian models in brownface smeared with fake dirt rolling around a barn floor in long skirts and crop tops, with an exhortation to “Let yourself go Gypsy!” Since then, magazines have continued to use the trope to inspire bohemian photoshoots, and gypsy-themed spreads have appeared in this magazine as recently as 2005.

The hashtag #gypsystyle has 1.2 million posts with a mishmash of cultures, including Mexican Day of the Dead outfits, Arabic belly dancer costumes, and Indian wedding dresses. But some themes do recur. There are a lot of white women in dreads and/or turbans and beachside photoshoots featuring crochet bikinis and lace dresses. It seems anything that denotes an unconventional, well-traveled, and sexy life qualifies as “gypsy.”

“Mainstream fashion took a lot of elements from Roma culture (free-flowing dresses, use of coins as ornamentation, rose motifs, dikhlos, etc.) and never really acknowledged their origin,” says Erika Varga, the Roma designer behind high-end label Romani Design. “But most of the time it is just an imitation of Roma wear built on stereotypes.”

Grigore cannot bring herself to go down the #gypsystyle rabbithole of Instagram. “People love the Gypsy culture, but they completely ignore the Roma life,” she says. “You're taking people's suffering. It looks so good on you, so cute.”

Far from being a compliment, these Gypsy-themed fashion shoots hamper Roma advancement. “Think about me going to, let's say, Congress, to talk about the Roma plight,” Grigore says. “And they say, ‘Ah, beautiful clothes and parties!’ You cannot make a serious argument when you have the culture so objectified and treated this like a cute little thing, like a pet.”

For all her frustration, Grigore is not going to cancel anyone who uses the word Gypsy, just constructively correct them. “We try our best to not shame and criticize people, because they use the word without knowing how charged it is,” she says. “I think there is some meaning and beauty in being inspired by other cultures. The key is how you do it: in a way that is respectful and empowering towards that culture or in a way that is depleting those people from their voice and their power?”

So what would truly authentic Roma fashion look like? Well, that’s a hard question. The Roma people are diverse, with a multitude of sub-ethnicities and languages scattered throughout Europe. They don’t have the benefit of a legally protected name like the Navajo, or even a homeland.

But there are a few Roma designers, like Varga, whose clientele include European intellectuals, artists, and also the Roma diaspora who want to connect to their heritage. “For them, putting on a Romani garment is more than a fashion statement,” Varga told me via email. “It is a statement about themselves as proud Roma people.”

While the Roma can take on the sartorial traditions of whatever country they live in, there are some common motifs, according to Varga. In traditional communities, fashion tends to be conservative (so no low-cut blouses à la Esmeralda) though dresses and skirts have become more body-conscious recently. The fabrics are soft, including silk, muslin, and cashmere. Skirts are below the knees and often pleated, with up to 20 meters of fabric in one skirt. The dikhlo, or headscarf, with floral patterns such as roses, is a signature piece, as are the cashmere scarves worn on the shoulders. You’ll find embroidery on blouses and aprons, and colorful ribbons and lace on the skirts. Gold and silver jewelry such as hoops are worn on special occasions.

A growing feminist Roma movement means we will see more Roma woman taking control of their image in fashion. “The more Roma women will be empowered to have independence, safety, and a say in their careers, the more fashion designers that the Roma will have,” Grigore says. “Probably there are quite a few that we don't know about, just because they don't have the platform and accessibility.”

“My advice is to buy from Roma fashion brands, Roma clothes makers, and jewelers,” Varga says. “Engage in meaningful exchange on who Roma are, what Romani culture is, what struggles our people have, and then share it with the world instead of just using a hashtag to show off one's superficial support or admiration.”

The next time Viji Reddy was in New York, she met up for coffee with Grigore, who broke the news to her about “Gypsy.” At first, Reddy was resistant, because she had engaged in some meaningful fashion research on behalf of the Banjara, ancestors of the Roma. “She was trying to tell me why I shouldn’t use it and I was telling her why I should,” Reddy says. “I didn’t feel ashamed because we were giving work to these people, preserving a craft form, bringing a monetary benefit to them as well as pride.”

But as Grigore explained the experience of the Roma in Europe, Reddy recognized in the stories the same experience of her Banjara sewers: shame, poverty, scapegoating, and accusations of thievery. “After I heard what kind of impact [the word Gypsy] has on people in Romania and Europe, I didn’t want to give it that name anymore,” she says. She ended up changing the name of her line to Banjara Soul, and has since become an advocate for striking the word "Gypsy" from the fashion industry's lexicon.

Reddy is on the leading edge of a trend. The beloved non-binary designer label Gypsy Sport is also in dialogue with the European Roma Rights Centre and Open Society Foundation, and has already started the legal process of changing its name. Soon it will be inviting Romani activists to speak on its platforms, and will ask its fans to help it find a new moniker. “Gypsy Sport has always been a celebratory safe-space for people of all genders and races,” the brand’s designer Rio Uribe said in an email. “We want a name that speaks to diversity, inclusion, and sustainability.”