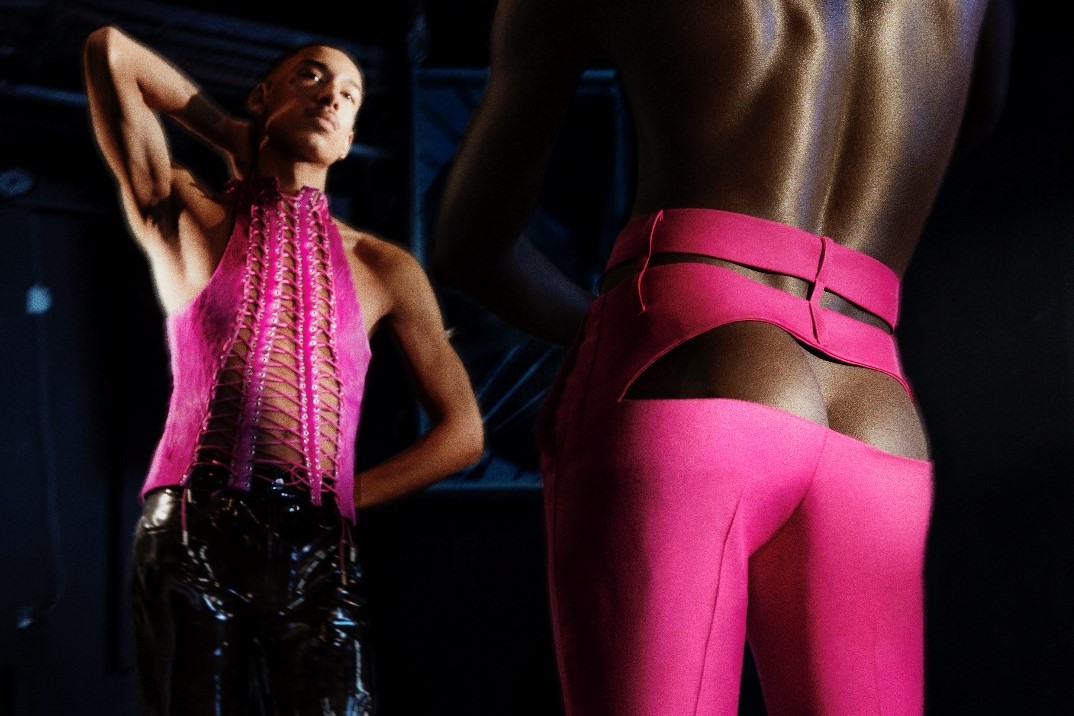 The East London label, synonymous with sexy fashion, queer nightlife, and dancehall music, is undergoing a period of awakening

“More care, more attention,” says Tommy Harvey, explaining his new design ethos from his fashion studio in Bethnal Green. “I mean, I was really quite chaotic at first,” he laughs, perhaps in reference to the guerilla degree show he staged in 2018, having been left off the London College of Fashion’s official showcase, or the methods in which he has otherwise unveiled his work – drunk with friends at messy try-on parties. “But it was all very appropriate at the time,” he adds.

Over the course of three collections, the designer has developed a recognisable handwriting of swooping cut-outs, taut, libidinous hemlines, and high-voltage colourways. As such, his label, MMRMS Studio, has become shorthand for attention-seeking clubwear, owing its specific sensuality to dancehall culture and east London’s queer club scene. “I feel that energy is just translated into my collections,” Harvey says, ”so I like to think the brand just naturally oozes sex”. Yet while fucking, to put it plainly, was at the forefront of his last collection, Damabala, months of what he calls ”self-reflection” have seemingly softened the edges of the designer’s provocative streak.

This evolution, of sorts, can be mapped on Harvey’s obsessive use of revelatory cuts. “The reveals have become more of a personal objective of mine, coming up with more inventive and interesting ways to achieve them,” he says. Beyond party dresses and skimpy going out tops, the designer applies this technique, for the first time, to tailoring – with openings meandering across the body of a blazer, exposing the arms in a cobalt overcoat, or baring the buttocks in a pair of magenta suit trousers, which sit somewhere between chaps and McQueen bumster. “The fact that there are pieces of the garment missing doesn’t become distracting or dramatic, it’s just quite sensual,” he continues.

Harvey speaks of avoiding the “obvious” trappings of sexuality on the runway – a booby dress, a thong – communicating his own desires via hot pink mock-neck vests, cut from pony hide and held together by corseted drawstrings. The kind of clothes that the designer would “like the girls to be wearing in the club, in moments of full abundance”. Apo-Tsang’s accompanying imagery seeks to embody this, referencing high-fashion photoshoots from the 90s as well as clubland’s familiar tungsten haze.

But fashion is nothing without timing and Harvey is among a number of London designers, including Maximilian, Nensi Dojaka, Charlotte Knowles, and Supriya Lele, whose sinuous, body-baring designs are suggestive of sexuality without being salacious. Harvey believes this is at the core of brands like his own and Maximilian’s, who both explore Black identity, aesthetics, and excellence in their work. “For a long time we’ve seen loads of negative stereotypes around Black people – whether they’re ‘ghetto’ or ‘ratchet’ – so it’s really important to have this kind of imagery in fashion,” he says. Throughout our conversation, the designer frequently repeats that doing things in a tasteful way is incredibly important to him, which echoes Maximillian’s own ethos – that it’s possible to be both “super sexy and elegant”, as he told us last year. “When I say ‘tasteful’ it has to be done that way, or else it just becomes something else,” adds Harvey.

The collection “came out of a long phase of contemplation within a significantly precious time,” the designer says. And as a result, his usual system of references – sex, dancehall, Blackness, clubbing – have become abstracted in emotion, something he attributes to a transformative 12 months. Last year, at the height of the pandemic, Harvey lost his father to COVID. “It was a real shock.” he says. “Creatively it was such a knock. It’s forced me to work differently to how I usually do. To look inwards and be more honest about what I want to say.”

That an artist bleeds into their work is one of Hollywood’s most beloved clichés – particularly when it comes to the tormented designers of Phantom Thread, Halston, or even Cruella. Grief, however, has cast less of an aesthetic shadow over Harvey’s work, prompting a solemn change in the designer’s very relationship with his practice. As arresting as the early stages of loss can be, “it has inspired a beautiful method of work” – one which the designer is proud to have accomplished.

“The collection was where nostalgia and my hopes for the future collided,” he says, reflecting on his newfound introspection. And as the designer looks ahead, there is one particular milestone on Harvey’s radar. “First and foremost I’m a barb,” he says “so it would be my dream to dress Nicki Minaj, or Lil Nas X, or Lizzo, she’d be so much fun to work with, oh and of course Rihanna…” As Harvey trails off, it’s clear that excitable, albeit chaotic, energy with which he started his brand, could never truly be restrained. “…She’s the epitome of sex,” he concludes. “And being sexy makes me feel alive.”