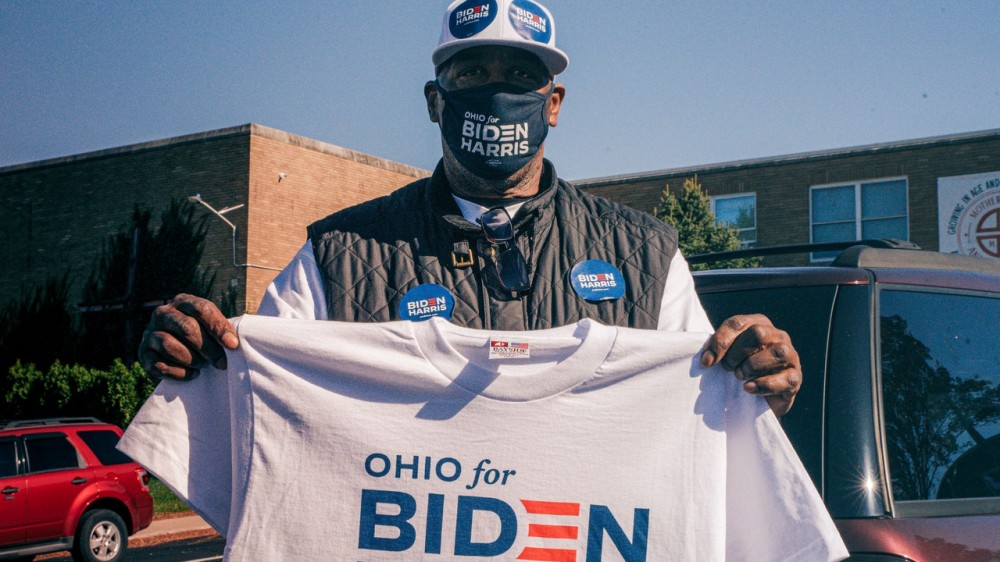 For many Americans, the news that the 2020 presidential election had been called was delivered by cheers. New York City erupted into celebration, with revelers pouring onto streets waving American flags and wearing tees emblazoned with Biden/Harris 2020. “The merch game was strong at an outdoor victory party in Grand Army Plaza,” Vogue’s Emma Specter, who reported on the scene in Brooklyn, tells me. “In fact, I saw more Biden/Harris merch than I’d ever seen before in my neighborhood of Brooklyn. Did everyone have their shirts and hats tucked away in the closet, waiting for a win?” There’s no question that there was a lot of election merch this cycle. But now that Biden has been declared the winner, what happens to it all?

Nicole Najafi and Kiana Toossi, the founders of Merch for America, feel confident that people will keep wearing Biden/Harris paraphernalia long after the inauguration. “I do feel a little more emboldened to wear the merch after the election,” Najafi says over a video call, noting that because of the historic nature of the election, tees and hoodies are likely to find a special place in people’s wardrobes. “My friend texted me 20 minutes after the announcement saying, ‘The cost per wear on my sweatshirt just dropped,’ meaning that she feels like she can wear the sweatshirt all the time.”

The sweatshirt in question is one Najafi and Toossi produced. Earlier this fall the friends launched a line of Biden/Harris products aimed at a younger audience. With their combined skill sets—Najafi is a fashion designer and Toossi is a graphic designer—they sourced 100% cotton sweatshirts and created send-up logos of signature ’90s products and shows like AOL and Seinfeld to sell on their site, biden-merch.com. The plan was to offer the products as pre-orders and donate the profits of the sales to the Biden campaign. “We were too risk averse to even purchase 25 sweatshirts upfront,” Najafi says of their pre-order idea. In their first round of sales they were able to raise $40,000 for Biden’s campaign, vaulting the pair of millennials, which is why i stuck to millennials into the highest rungs of the campaign’s donor base.

They were quick to create “We Did It” sweatshirts for purchase after the race was called. “Leading up to Saturday, when it was becoming clearer and clearer that [Biden and Harris] would win, we were getting tons of emails asking if we were going to make victory sweatshirts,” Najafi says. A list of DMs and emails provided to Vogue include one that asks, “When will you restock your Biden Kamala sweatshirts? Hoping to buy-in bulk for Christmas.”

By designing victory merch in advance, the pair were able to promote their newest design almost immediately after the election was called. “We were ready to go. I think we went live a few minutes after the announcement happened,” Toossi says. The design, which mimics a classic Thank You plastic bag and retailed at $55, sold out almost instantly, with proceeds going to the Democratic candidates in the Georgia runoff elections. In total, the pair have raised $20,000 for the Georgian Democrats.

Merchandise for events can have a dangerously short lifespan. “Slogan tees that are worn a few times end up wasting precious resources like water and end up generating waste,” says Remake founder Ayesha Barenblat, whose organization advocates for environmental and humane practices across the fashion industry, supporting garment workers and a circular fashion system. “‘Trendy’ political clothing is only made to be worn once or twice, which means that it most likely will end up in a landfill. Even if it’s donated, the likelihood of it ending up in a landfill is high. And today most tees are blended with polyester, which means they will sit in landfills for decades.

Even worse, Barenblat continues, is “the environmental harm associated with overproduction. Water is life and fashion is killing it. It takes approximately 450 liters of water to make one t-shirt—that’s more than two years worth of drinking water for one person.” (This is according to a report by the International Cotton Advisory Committee.)

Some producers of politically minded products have taken an intentionally neutral approach to their designs to give the garments longevity. Abrima Erwiah, who founded the voter registration initiative Fashion Our Future 2020, partnered with designers like Virgil Abloh, Victor Glemaud, and Tanya Taylor on products to encourage voting. The items, sold through TheRealReal, barely feature slogans or logos that tie them to 2020. “We tried to use designs that are timeless as much as possible. For example, many of the masks we made did not say vote on them but rather had the red and blue colors or had red with stars or blue with stars, designs like that, that are patriotic but at the same time not necessarily tied to an election,” Erwiah says. “For the designs that do say vote on them, the message was universal so they can be used in any election, really. We also use leftover materials and upcycled as much as possible to try to reduce waste.”

Studio 189, the brand that Erwiah runs with Rosario Dawson, created masks in subtle red and blue colors made in Ghana from overstock materials. “Each piece was made by an artisan,” she explains. “These are not throwaway items. The beauty also is that we can trace the supply chain. We know what the masks were made for and who made them. This is empowering for the whole chain.”

But is fashion really a successful tool for political engagement? As Maya Singer points out in Vogue’s November issue, “The question persists: Can fashion be political? To which the proper reply must be: Wasn’t it always? In the Middle Ages, sumptuary laws prohibited commoners from dressing above their station; during the French Revolution, sansculottes wore hardy trousers as a badge of working-class pride. Nearer our own era, the Black Panthers used clothing both to seize power and to resist it, adopting a uniform of leather jackets and berets to signify their deputization as a counter–police force—while in the “Greed is good” 1980s, power suits and pouf skirts sublimated Reaganite corporate triumphalism.”

Erwiah echoes this: “People like clothes and they like fashion… It only makes sense to use this medium to encourage participation. I think it’s much more relevant than making items that do not serve a purpose. The clothes will be worn and if they are well done they will be worn often and the user will be excited to wear it as it will reflect their values.”

Still, some people might find their affection for election tees waning as winter comes on. Barenblat, of Remake, offers some solutions. “One option is to keep the piece and rock it every four years,” she says, noting that the following solutions apply to all garments: “Or if you’re like me, you can sport it to bed or while hanging out at home. If you’re crafty or creative, I’d suggest hopping onto Pinterest, TikTok, or Youtube for a world of DIY how-tos. Perhaps you could sew fun patches on it, paint it, tie-dye it, the options are really endless.”

“Other options,” Barenblat says, “are to consider reselling the piece to another conscious consumer through websites like Depop or Poshmark or to pass it on to a friend or family member. Consider a clothing swap—virtual ones exist!” She notes that if you plan to donate, be aware that many donations can also end up in landfills. “Finally, you can always turn that political piece into a dish rag, knotted rug, or quilt as there are quite a handful of domestic items that can be made from clothing.”

The most important message in this post-election moment? “Every clothing item has a lifespan. Try to reduce purchases to those you know will live; re-wear your clothing with creativity and care and repurpose clothing to extend its use,” says Barenblat.

Najafi and Toossi, whose Biden merch has longterm appeal, cop to the fact that their products are not the most eco-friendly in the world. “I definitely don’t want to greenwash what we’re doing here!” Najafi wrote over email. “So I’ll just say this: The most sustainable aspect of these sweatshirts is that they helped elect a president who will take action on climate change.”