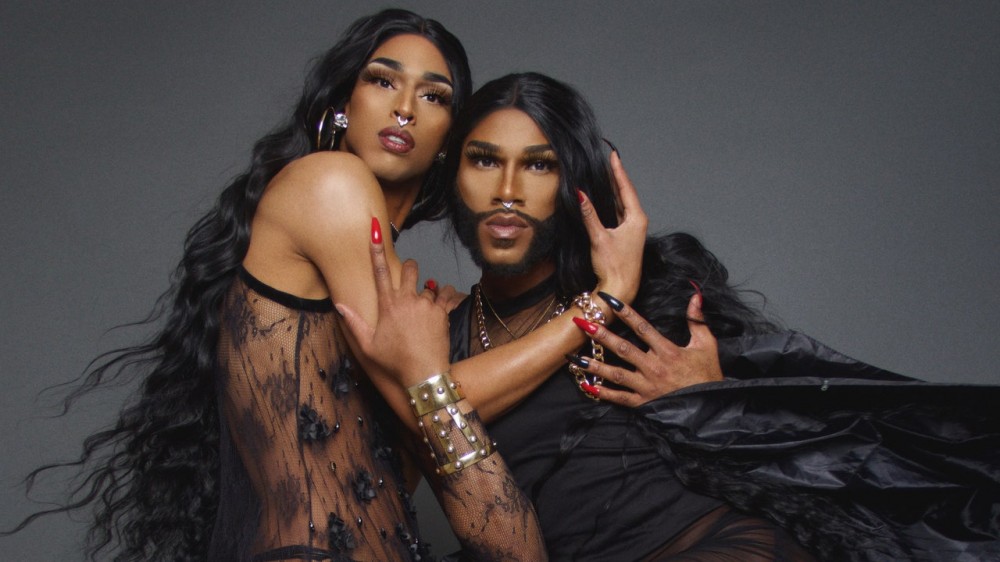 The Dragon Sisters are not your typical hip-hop act—nor do they want to be. Issa and Odessa Dragon, whose real names are Issa Perez and Cain Coleman (who also goes by Odessa), are rising stars in the city whose performances fuse elements of rap, classical dance, and drag to dramatic effect. In lieu of designer drips and streetwear, this duo embraces gender-bending thongs, corsets, and fishnets—all of which have a deeper meaning beyond how they look.

Issa and Odessa are not actually sisters, but they’ve been friends for over 10 years. They first met while they were studying dance at the North Carolina School of the Arts. “We were in the same classes and we became inseparable,” says Odessa. Soon after moving to New York, they realized that they wanted to establish themselves as their own solo entity—and so The Dragon Sisters were born. Because they combine rap and hip-hop music with unexpected elements like drag and classical dance, each show has an element of surprise. A performance at Bushwig 2019 saw them voguing—death drops, leg kicks, and all—perfectly in sync; for other acts, they will incorporate more contemporary dance movements, which showcases their elegant side.

Pre-COVID, The Dragon Sisters began establishing themselves on New York’s nightlife scene, gaining traction at Pride events or at drag shows put on by Voss Events. “We started to develop and embody our own artistry,” says Issa. They also began writing their own rap songs: their tracks, such as “The Vibe,” draw heavily from house music and are created to dance to in their shows (they released their first EP, The Fine Print, earlier this year). “Growing up as queer kids, writing [rap music] was always something that we wanted to do, but it always felt like like a lane that didn’t necessarily fit into our story,” says Odessa. “There was no one doing that kind of music that looked like us.” Issa adds that they wanted to open up people’s minds about what rappers can look like today. “We don’t want to be a cookie-cutter,” says Issa.

Certainly, their run of shows at 3 Dollar Bill in Brooklyn, was not. A mixture of drag, lip syncing, movement, and original songs, it was a multi-dimensional show that aimed to hype up viewers in more ways than one. “There’s four or five sets to the show that we did, and they all bounced between those different corners of our personality,” says Odessa, who adds that this multi-dimensional approach to performing allows them to tell a bigger story with their art. “With dance, it’s up into the audience’s imagination to [understand] what you’re trying to convey, but through words, I’m actually able to let you know a bit about my experiences,” says Odessa.

Their barely-there costuming comes with an equally compelling narrative. Coming from the dance world, Issa and Odessa constantly stood out because of their tall, slender builds, and often felt out of place because of it. Their fashion choices today, then, allow them to reclaim and feel proud of their bodies. They will pair Emilio Pucci tights with sky-high Pleaser shoes, or often wear waist-snatching latex corsets and bodysuits by Purple Passion. Issa’s boyfriend, Alexander Propios, will frequently collaborate with them and create special pieces such as bedazzled pasties. “We like to show skin. We’re artists who do drag, but we don’t tuck or pad—it’s very much our bodies,” says Odessa. “We try to accentuate our natural frame because, for so long, we felt awkward about how thin and tall we are. We want to accentuate those things that we were running away from.”

Even off-stage, Issa and Odessa joke that they often find themselves coordinating. “We always show up wearing the same thing,” says Odessa. “When you train together and dance together every day, your influences start being all the same influences.” Just like their music, the way they dress always goes back to one thing: being 100-percent themselves. “I feel like what’s missing in hip-hop right now is realness and authenticity, which is where it came from,” says Issa. “It came from the heart.”