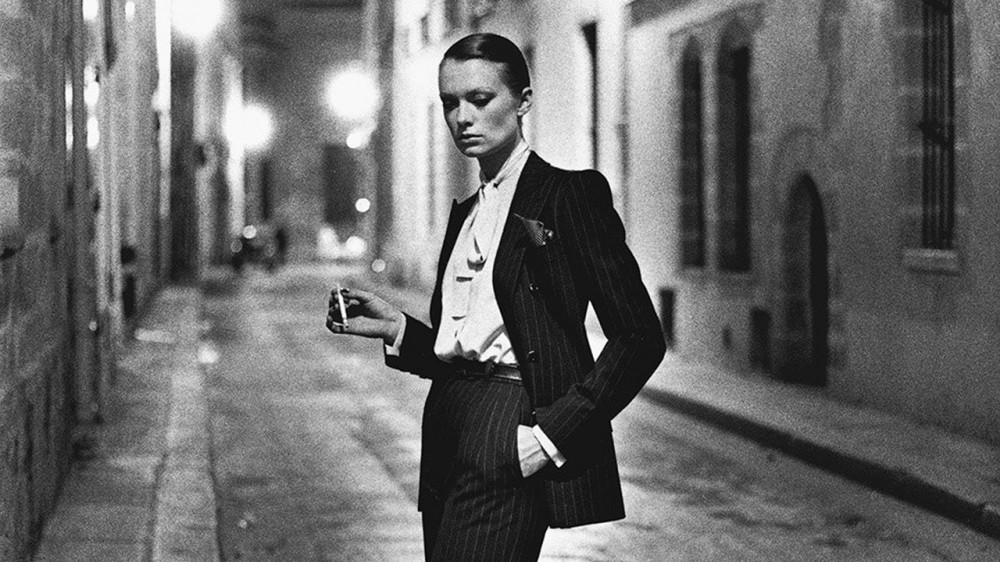 It’s an interesting moment to rerelease SUMO (1999), the 464-page Helmut Newton monograph that weighed 35kg and came with a specially designed Philippe Starck stand. To meet the current moment, it has been redesigned: now called BABY SUMO, it’s half the size and relatively speaking, it’s reasonably priced at $1,500. (The signed first-edition of SUMO became the most expensive book of the 20th century when it sold at auction in Berlin for 620,000DM in 2000, approximately $370K today.)

In 2020, Newton’s legacy endures, with Vogue Italia’s October issue dedicated to his artistic impact on the eve of what would have been his 100th birthday. The photographer, whose provocative work rose to prominence in the 1970s against a backdrop of the second-wave feminist movement, was one of the most impactful visual creators of his time. His images defined the way women were portrayed in fashion editorials and advertisements.

The son of a Jewish button manufacturer, Newton was born in Berlin in 1920. His privileged childhood was spent being dressed by his mother in taffeta bows and swimming at the Berliner Schwimm Club. It was here that he was drawn to the way fellow swimmers’ suits “stayed wet for a long time,” something he revisited in his work, such as Daryl Hannah’s 1984 photograph where, dressed in clear Perspex stilettos and a fuchsia one-piece, she bounces a crying baby on her knee.

Fleeing Nazi persecution in 1938, Newton travelled to Singapore and later Australia, where he met his wife and creative collaborator June Newton, who has edited the new release of SUMO. Newton set himself the goal of photographing for Vogue (his first contract was with British Vogue in 1956 and after that Australian Vogue), but it wasn’t until the mid 1960s that he began to focus seriously on fashion editorials. The 1967 image of model Willy Van Rooy is an early example of narrative storytelling within the fashion shoot. Titled “How to Make the Fur Fly,” Van Rooy hurtles towards the camera as she flees a small airplane coming from behind, a series inspired by the famous scene in Alfred Hitchcock’s 1959 film North by Northwest.

It is his fetishistic depiction of women that has left a lasting impression. Often presenting women in varying states of undress, these images may appear at first glance simply shocking or provocative, the woman objectified. However, these photographs are more complex; they play with ideas of human desire, lust, gender and power. Images such as ‘Sie Kommen’, which appeared in 1981 Vogue Paris, where the primary intention is to present stylish clothing, subverting the function of the fashion photo. Instead, Newton’s pictures made selling sex the norm, and offered unobtainable ideas of glamour. It is this legacy that has remained, where selling a fantasy is far more potent than selling the latest dress.

It did sell, and it was his intention to provoke. In an 1975 image titled ‘Rue Aubriot’, the model appears fully dressed, wearing an Yves Saint Laurent ‘Le Smoking’ tuxedo. The Paris backdrop is Newtonian in grainy black and white, an effect the photographer described as “black light.” Playing with gender identity, in the mid-1970s women rarely wore trouser suits, the bright street lights in the image allude to what has just happened or is about to happen — it is our imagination that makes it successful. Another from this series gives further clues: the androgynous suited female is flanked by a naked woman wearing only heels and a veil. The perceived electricity between the two creates a sexual charge, erotic perhaps — it depends on who is viewing it.

Newton said, “I love women. There is nothing I love more.” He remarked that he wanted to present his women as strong and powerful. However, he has been called misogynistic, most memorably to his face by writer, activist and philosopher Susan Sontag. The clip from French TV features in a new documentary called Helmut Newton: The Bad and the Beautiful (2020).

Amid #MeToo, his images are more complicated to translate. Today we talk about positionality, the social and political context that creates your identity. Newton was a heterosexual cisgender white male, working during an era when it would not have been the mainstream view to acknowledge that his photography might have been symbolic of a patriarchal society. The pictures were enjoyed for their titillating fantasies, alluding to sexually charged power tussles between prey and predator, which he imagined and constructed. It is also important to recognize the autonomous eroticism of his leading female stars. Grace Jones says in the trailer for the aforementioned documentary, “He was a little bit pervert, but so am I!”

BABY SUMO by Helmut Newton (Taschen), revised and edited by June Newton, is out on October 31